The Daily Aztec • May 2, 2020 • https://thedailyaztec.com/100719/sports/sdsu-mens-tennis-notches-three-all-conference-selections/ 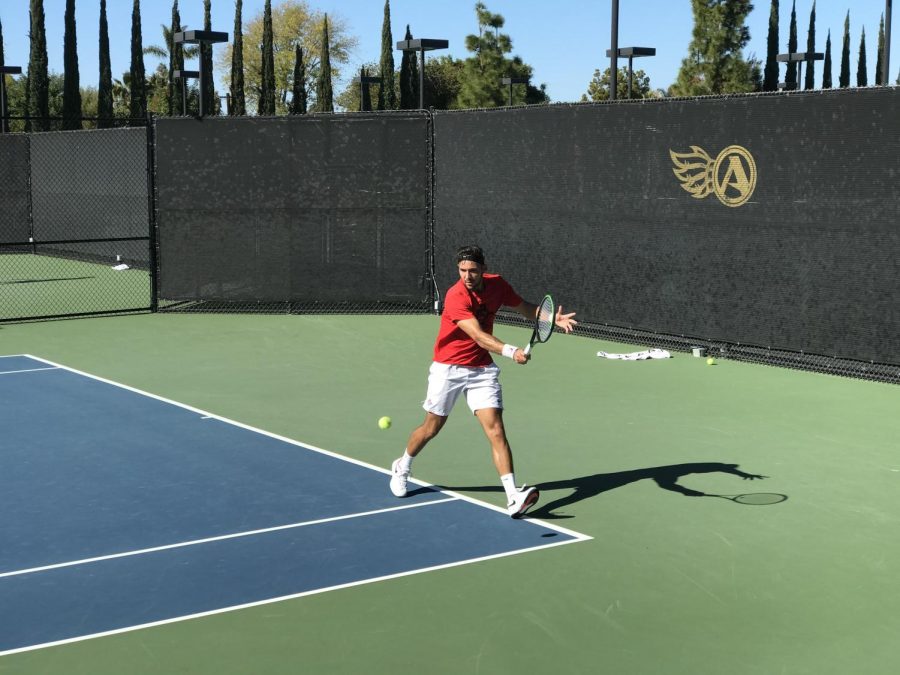 Aztecs' senior Fabian Roensdorf attempts to hit the ball past his opponent against Oklahoma State on Jan. 12 at the Aztec Tennis Center.

Three players on the San Diego State men’s tennis team were named to the 2020 All-Mountain West team on April 30, according to a press release.

Senior Fabien Roensdorf was named to the All-Mountain West singles team, while the pair of senior Rafael Gonzales Almazan and junior Ignacio Martinez were named to the all-conference doubles team.

For Almazan and Martinez, it was the second time in their careers they’ve been named to the All-MWC team as Almazan earned the honor in 2018 and Martinez in 2019.

For Roensdorf, a native of Dortmund, Germany, this is the first time in his career he has earned the honor.

“(Martinez and Almazan) were on their way to having a really stellar season,” Aztecs head coach Gene Carswell said. “They really, really gelled as the season progressed.”

SDSU finished the season at 5-5 and won its lone conference match against Boise State on Feb. 23. The team was set to begin a four-game home stretch before the season was cancelled.

Despite the COVID-19 pandemic shutting down the spring tennis season after just 10 matches, including one conference match, the Mountain West followed through with postseason honors.

Carswell was confident that, if the season had continued, his crew had the potential to place even more players on the All-MW team.

“We had one of, if not the best, returning team,” Carswell said. “It was disappointing not to see my guys get to play the whole season.”

Roesndorf led the Aztecs in singles, manning the No. 1 spot on the ladder in all 10 games played. The senior won four games in total while SDSU won each match when Roesndorf won.

Roesndorf proved his mettle throughout the season as he faced two nationally ranked players in No. 7 Keegan Smith of UCLA and No. 41 Matel Vocej of Oklahoma State but was on the losing side in both hard-fought matches.

“He (Roesndorf) had some really high-quality matches,” Carswell said. “He was never one to shy away from the competition.”

With a record of 7-1, Almazan and Martinez were the most successful Aztec doubles team this season.

The duo had a successful run in the Pacific Coast Men’s Doubles Championship back in March, compiling a 4-1 record while upsetting the Oklahoma State team of Etienne Donnet and Mathieu Scaglia, who were ranked No. 21 in the nation at that time.