The Daily Aztec • May 6, 2020 • https://thedailyaztec.com/100753/sports/aztecs-water-polo-earns-three-all-american-selections/ 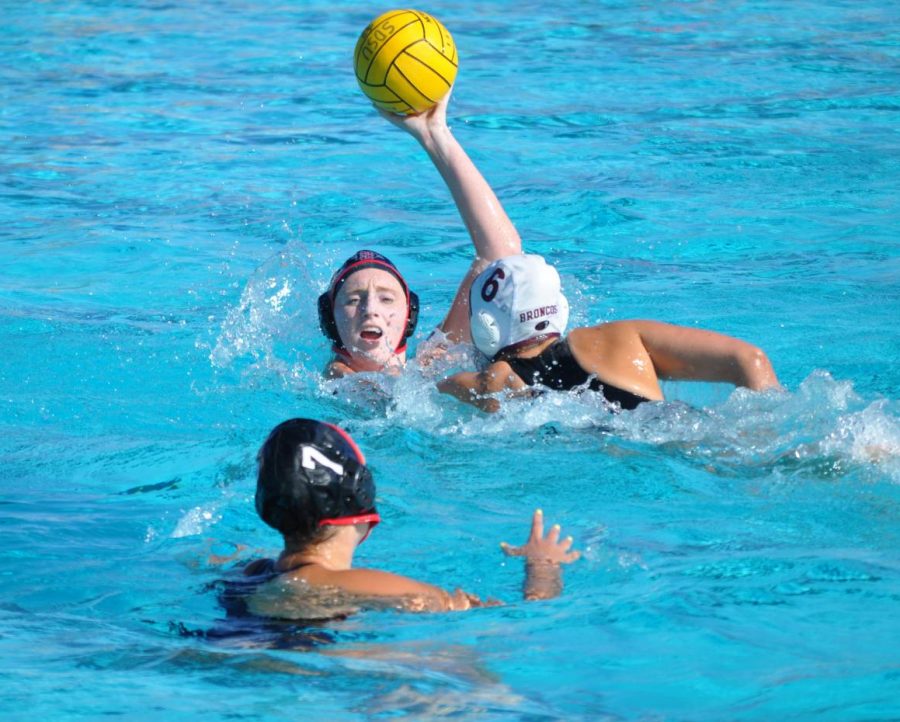 Emily Bennett, during her sophomore season, attempts to pass the ball to utility player Shelby Kraft during the Aztecs' 4-1 victory over Santa Clara on March 28, 2019 at the Aztec Aquaplex.

Despite the season ending early, head coach Carin Crawford said she was excited to hear the national organization was going to hand out awards.

“We have been moving through stages of grief in terms of how our season ended and where we are in the world right now,” Crawford told The Daily Aztec. “I’m happy that the Association of Collegiate Water Polo Coaches went ahead and decided to recognize All-Americans.”

In her fourth and final season, Hastings was tied for the team lead with 20 assists before the season ended on March 7.

Crawford said by the time the 6-foot utility player reached her senior season, Hastings was able to elevate her role.

“In her senior year, she played big minutes, was a reliable contributor to our team and had the best season of her career underway,” Crawford said. “It’s sad it was cut short, but I’m really happy she was recognized for the work she did this season.”

When the news broke, Hastings said she was shocked she made the list.

“This was my first season getting a lot of minutes and being a starter,” Hastings said. “It was an honor and was very surprising.”

Hastings, who is from nearby Imperial Beach and went to Mar Vista High School, said she was able to get the support as a result of growing up in San Diego.

“All the way through my college career, I had a huge support crew because my high school team would come to my games and my family lives in San Diego,” Hastings said. “It was an honor to be a local and have gotten this award and all the support is really awesome.”

Hastings heard Parenteau and Bennett also received All-American status and was glad to hear she was not the only one on the list.

“I am so proud of both of them,” Hastings said. “Both Maddy and I are co-captains along with (Casia), and it is an honor for both of us to go out as seniors to have gotten All-American awards. Emily is a great help to this team and congratulate both her and Maddy.”

Parenteau led the Aztecs defensively with 34 steals. In addition, she drew 30 ejections, which ranked second on the squad.

The driver from Lake Forrest, California said she was also shocked when the award came out and felt that it was icing on the cake to end her collegiate career.

“I was surprised by it,” Parenteau said. “I had no idea and was not on my radar. After finding out, I was also stoked. I’ve never had a recognition like this and thought it was pretty cool.”

Although it was Hasting’s and Parenteau’s first national honor, it was Bennett’s second of her four-year career. Bennett was SDSU’s only All-American last season.

Through the team’s first 18 games, in which the Aztecs went 9-9, Bennett was the team’s leading scorer with 31 goals. She also led the team with 48 ejections drawn, six field blocks and her 20 assists were tied with Hastings.

Like Crawford, Hastings and Parenteau, Bennett was also didn’t expect to see the ACWPC announce All-Americans because of the season getting cancelled halfway through.

“I’m kind of surprised because with the season ending so short, I couldn’t show off all that I could’ve done to earn that spot,” Bennett said. “I wanted to play more and didn’t expect any of it. I’m excited to be honored that way, even with the short season.”

With three players receiving All-American status, SDSU has had at least one All-American after every season since 1996, and the three honorees this season tie for the second-most in a single season.

Although the season ended early, Crawford said the award makes the season well worth it.

“It’s a nice silver lining for our season,” she said.