The Daily Aztec • May 9, 2020 • https://thedailyaztec.com/100864/artsandculture/asian-american-music-collective-hosts-uplifting-youtube-concert/ 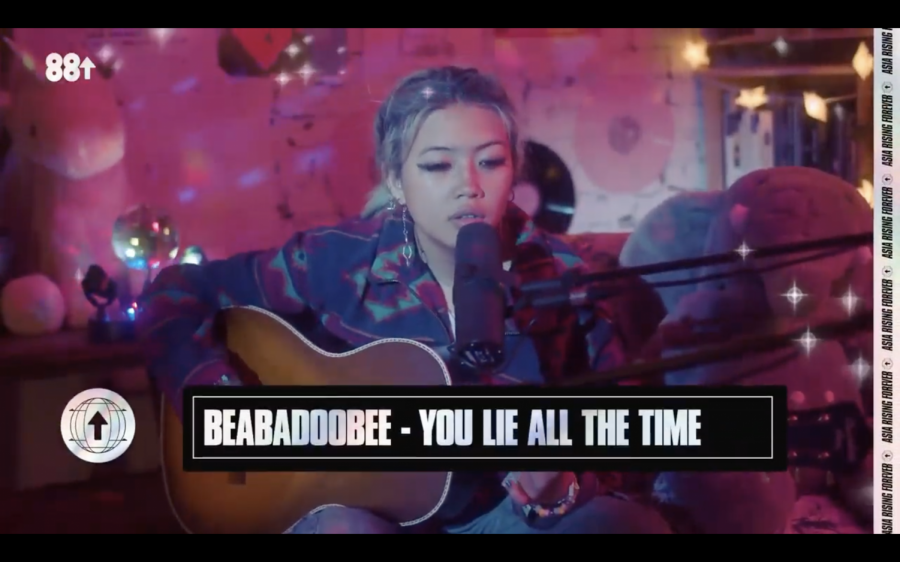 Beabadoobee sung "You Lie all the time" live to Youtube views during the concert stream.

In celebration of Asian and Pacific Islander American Heritage month, a YouTube live stream was held Wednesday night to showcase the most exciting Asian talent from around the world. Asian American music collective 88rising hosted the stream and interacted with viewers on Twitter throughout the night.

The Asia Rising Forever festival united more than 20 Asian artists and broadcasted them worldwide to promote a message of positivity and unity in the Asian community. The goal of the livestream was to raise $10,000 for Asian Americans Advancing Justice, a charity that promotes the advancement of civil rights for Asian Americans.

The festival’s message of Asian solidarity is especially important as numerous racially motivated attacks against innocent Asian citizens have occurred worldwide due to the coronavirus’ origin in China, and San Diego State hasn’t been immune. A xenophobic “Zoom bombing” incident occurred last month during a call with a Filipinx cultural organization where multiple racist comments were made.

The festival was organized by 88rising’s founder Sean Miyashiro and hosted by Korean rapper and actor Dumbfounded. The night was filled with intimate performances, choreographed dances and skits featuring guest appearances from 88rising members.

One notable performance came from Vietnamese rapper and singer Suboi, who’s widely known as Vietnam’s “Queen of Hip Hop.” Before she began playing her energetic dubstep song “Bet On Me,” Suboi expressed her gratitude for the millions of unappreciated workers working through this pandemic.

“I dedicate this to all the people that work a lot but not a lot of people recognize,” Suboi said. “They’re the most important part of making something right.”

Following Suboi was the dream pop band No Vacation performing their hit “Days” from their home in Brooklyn, New York. Dream pop is a subgenre of alternative pop music. Guitarist Nat Lee, who is a Vietnamese American, said it’s difficult for many Asian Americans to pursue music but that this festival was a great chance to celebrate Asian culture.

“Sometimes being a musician isn’t always culturally accepted but it’s great to be a part of this because it highlights a more diverse music community,” Lee said.

Korean-American R&B artist Audrey Nuna performed a medley of her songs Souffle/Comic Sans from her apartment in New Jersey and named Kanye West and Sade as her biggest influences. Despite the lack of Asian portrayals in mass media, Nuna said she feels honored to be a musician in this revolutionary age of Asian representation.

“Growing up not seeing a face who looks like you in mainstream media is something that I didn’t even realize affected me until I was definitely older,” Nuna said. “But I feel really blessed to be born in this era and this is only the beginning and I’m super super honored to be a part of it.”

Taiwanese singer and DJ Josh Pan performed a cover of Harry Styles’ “Watermelon Sugar” and said he was excited to see how Asian artists have influenced the music industry.

“To see the impact we have on music culture is really great, because 10 years ago this event would have never happened, not even five years ago,” Pan said.

K-pop group CLC held a pajama party and performed their song “Me” on a rooftop in Seoul, South Korea. Sorn, one of the group’s founding members, said the group was proud to be a part of the festival, especially because she is inspired by the success of a few of 88risng’s artists including NIKI, Joji and Rich Brian.

“I’m really proud to see that they’re doing so well in America and not only in America they’re making the people in their own country very proud,” Sorn said. “They’re such an inspiration and a good role model for us and for the younger generation.”

Not only were there many Asian nations represented during the show but numerous genres were showcased as well. This includes a hip-hop cypher from the Chinese rap group Higher Brothers, Thai singer Phum Viphurit’s acoustic R&B rendition of his song “Lover Boy” and 9M88’s jazz-fusion performance of “Aim High” in Taipei, Taiwan.

Later, NIKI cooked orange chicken and Rich Brian used his drone to deliver quarantine gifts to some of his friends close by. In addition, Brian delivered money to some local workers with the help of some special guests including rapper Guapdad 4000, producer Kenny Beats and YouTubers Cody Ko and Noel Miller

To finish off the night, world famous K-pop group LOONA performed their hit songs “So What” and “Colors,” along with a breathtaking cover of NIKI’s “I Like U.”

By the end of the stream, more than $22,000 had been raised and 88rising announced on Twitter that the event reached over 3 million viewers.

Asia Rising Forever was a huge success with lots of diverse representation from Asian performers around the world. It was a fun and authentic celebration of Asian music and culture.

In case you missed the stream or would like to check it out, find it here on YouTube.