The Daily Aztec • May 16, 2020 • https://thedailyaztec.com/101027/news/semester-in-review-coronavirus-and-a-historic-season-for-mens-basketball/

Semester in Review: Coronavirus and a historic season for men’s basketball 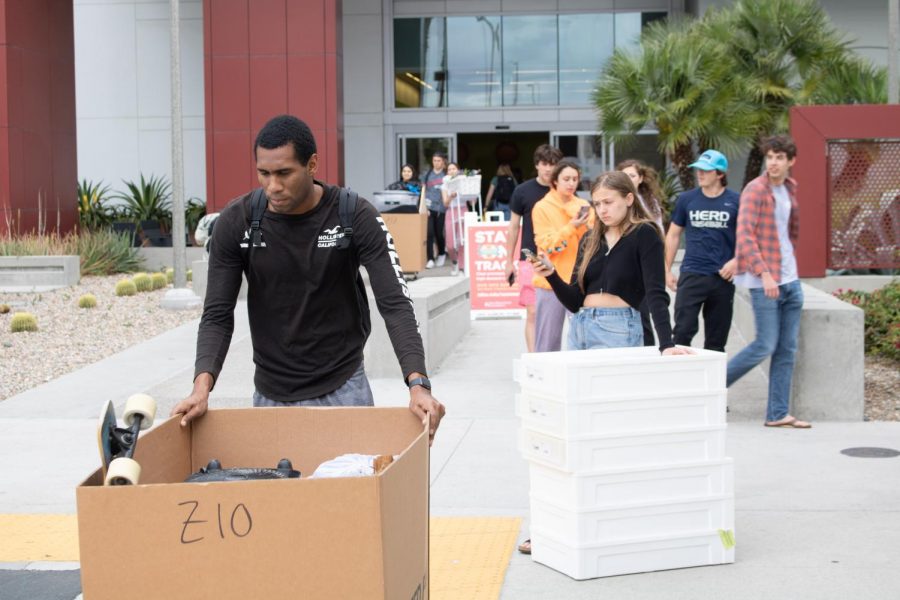 San Diego State freshmen move out of campus housing in mid-March amid the onset of the coronavirus pandemic.

by Kaitlyn Little and Aaron Tolentino

The spring 2020 semester at San Diego State was turbulent and quickly cut short by the onset of COVID-19.

Here are some of the biggest things that happened:
Coronavirus Pandemic
Things were running normally at SDSU until the threat of coronavirus became more evident.

First, the university began taking deep cleaning measures according to a campus-wide email that was sent on March 6. Along with that, campus faculty received an email advising them to prepare for the possibility of online or remote teaching.

But by March 10, the university decided it would require all in-person courses to transition to a virtual platform after spring break.

However, this process was quickly sped up because on March 13, the school announced all face-to-face instruction aside from labs would cease immediately to prevent the spread of COVID-19. Labs were then shifted to a virtual platform by March 15. At this point, the campus remained open and students were still living in university housing.

Because of the abrupt changes due to the pandemic, the University Senate voted on providing credit/no credit option to all spring 2020 courses, which was heavily advocated by Associated Students executives. This would allow students to change the status of their class until May 1.

Campus housing closed on March 18, allowing students only one day to return home. Some exceptions were granted, with approximately 160 students continuing to live on campus. The school said students will be reimbursed for the remainder of their housing contract and unused meal plan. Students were also able to request a prorated refund for their parking pass — totaling more than $24 million in refunds.

On March 20, SDSU decided to postpone the May commencement until December. They hosted a virtual celebration this Saturday, May 16, dedicated to the class of 2020 graduates.

It was just announced that next semester, fall 2020, will move forward with virtual instruction to further prevent the risk of spreading coronavirus.
Study Abroad
The domino effect of study abroad cancellations began when SDSU first decided to suspend all the international programs to China for the spring semester on Jan. 29.

While these measures were taken to prevent the exposure of coronavirus, a student who studied abroad in Italy still tested positive for COVID-19 on March 13.

Due to the number of cancellations, the University Senate voted to approve a waiver for the international experience requirement. This applied to students in their final year of study or if their program has been suspended.

This debate had multiple controversies, including SDSU 2020 Vision recycling an old Instagram, putting themselves hundreds of followers ahead of SDSYOU, or Presidential Candidate Steven Plante apologizing for the use of a homophobic slur in a GroupMe message.

With all debates and voting taking place online, 9.5% of the student body participated. This was down 50% from campus voting in 2017 in which 20% of students voted.
SDSU Men’s Basketball Has Historic Season
The Aztecs started the season with a program-best 26-0 record, surpassing the 2010-11 team that featured 2x NBA Finals MVP Kawhi Leonard. SDSU was ranked as high as No. 4 in the Associated Press Top 25 Poll, which tied for the highest ranking in school history. The team clinched the Mountain West regular season title on Feb. 11 with four conference games remaining.

Though the pandemic caused the NCAA Tournament to be canceled, many will remember the 2019-20 Aztecs as arguably the best team in program history.

30 wins this season makes SDSU the first of two Division I teams in the entire nation to reach the plateau.
26 wins to start the season is longest winning streak since the 2016-17 Gonzaga team started 29-0 and reached the national championship game
16 wins away from Viejas Arena. The Aztecs’ road/neutral site record of 16-1 is the best in the nation.
5 Aztecs received all-conference honors, which was the most of any Mountain West team.
4 The Aztecs were ranked as high as No. 4 in the AP Top 25 Poll for five straight weeks.
12 Mountain West regular season and tournament titles are the most of any team in the conference.
Kawhi Leonard Becomes First Aztec to Have Jersey Hung Up in Viejas Arena Rafters
Moments after Leonard dropped 31 points against the Minnesota Timberwolves on Feb. 1, he and his Clipper teammates flew down to San Diego for SDSU’s matchup against Utah State. Notable Clippers in attendance at Viejas Arena were head coach Doc Rivers, owner Steve Ballmer, guards Paul George and Lou Williams.

During halftime in front of a sold-out crowd, Leonard was joined by former Aztec teammates, along with former coach Steve Fisher, to see the No. 15 SDSU jersey hung up in the rafters.

Demand for student tickets was at an all-time high, causing the ticket-claiming site to crash.

The event was highly anticipated as the SDSU alum was on top of the basketball world — having just won an NBA Championship and Finals MVP honors.

The decision to leave school early as Ismael was picked in the fifth round, 156th overall by the Washington Redskins.

In each of his three seasons, Ismael was named on an all-Mountain West team.

Ismael’s selection marked the fourth straight year an Aztec was selected in the NFL Draft.

In addition to Ismael, several other Aztecs were signed by NFL teams as undrafted free agents. Luq Barcoo, who signed the largest guaranteed contract by any undrafted rookie at $180K with a $20K signing bonus, was signed by the Jacksonville Jaguars. Parker Houston signed with the Arizona Cardinals, Kyahva Tezino with the Patriots and Daishawn Dixon with the Ravens.