After months of uncertainty, Casey Schmitt looks forward to a new beginning

The junior third baseman and pitcher was the first Aztec off the board in the 2020 MLB Draft. 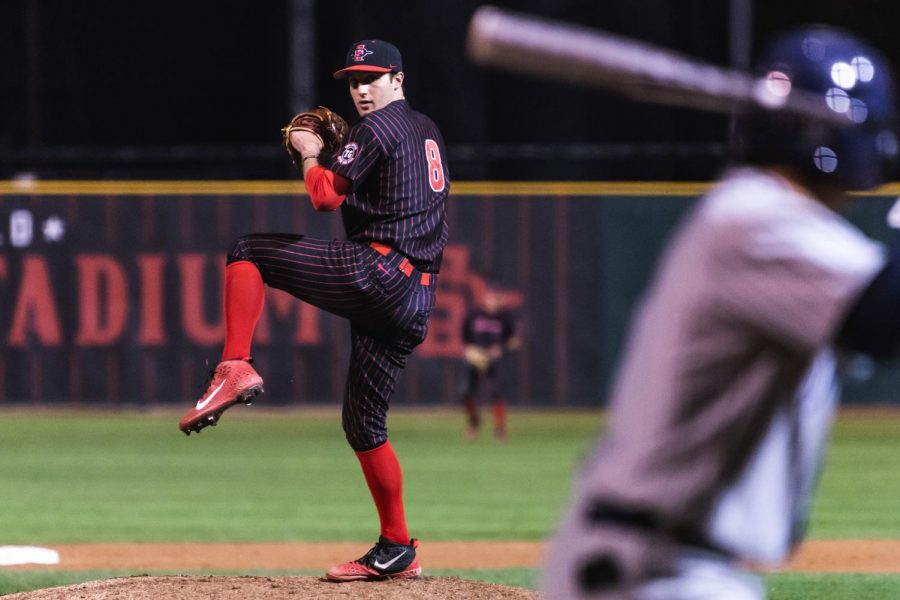 Then-sophomore pitcher Casey Schmitt pitches during his save against Nevada on March 8, 2019 at Tony Gwynn Stadium.

Former Aztec junior third baseman and pitcher Casey Schmitt was selected by the San Francisco Giants as the 49th overall pick in the second round of the 2020 MLB Draft.

A dream turned reality, Schmitt said hearing his name called was nothing short of amazing.

“It was definitely a dream come true,” Schmitt told The Daily Aztec. “I’ve kind of been waiting for this moment since I was younger, so for it to finally happen was awesome.”

All the excitement of this year’s draft also brought much uncertainty. Due to the ongoing COVID-19 pandemic, the draft’s usual 40 rounds were cut down to just five, leaving fans, players and organizations on edge.

However, Schmitt took the setback in stride and kept his focus in the time leading up to the event.

“It’s definitely always in the back of my head,” Schmitt said in regard to the abbreviated draft. “For me, personally I didn’t really try to think about it too much. While this was all taking place, I just went out and just started doing my thing.”

The shortened draft shared a striking similarity with the Aztecs’ 2020 season, which was also cut short due to COVID-19.

SDSU was projected to finish first in the Mountain West Conference, and the team had racked up several victories over ranked opponents in the early weeks of this year’s campaign.

The disappointment of a season ended before it had really begun is something that Schmitt said was felt not only amongst the squad, but also by fans across the nation.

“It was definitely tough,” he said. “It was tough for everyone across the country: the fans, players, everyone that kind of supports baseball. It was tough to see it just stop so suddenly.”

Despite their inability to be together on the baseball diamond, the Aztecs kept a united front against the adversity thrown their way.

“We still met as a team and stuff like that,” Schmitt said. “We all still stick together and still talk to each other.”

In times of frustration, a solid support system is crucial. Schmitt was able to find this through his teammates and coaches, who supported him through both his hardships and triumphs.

Schmitt said the connections he made during his time at SDSU have helped him grow as a player.

“It’s been great since I stepped on campus,” he said. “They’ve been able to develop players, and it’s just been awesome since I’ve been there,” Schmitt added.

Schmitt’s years donning Scarlet and Black taught him the importance of hard work, dedication and passion. Aside from the development of a rising star, the program was also able to increase  Schmitt’s genuine love of the game.

“Just kind of going out there and playing, having fun,” he said of his takeaways from his time at Tony Gwynn Stadium.

His dedication to continuous improvement while still having fun on the baseball field is something that Schmitt looks to incorporate into his future as a professional ballplayer.

While he has much to look forward to, Schmitt also looks back on his younger days in the sandlot.

Playing in the major leagues was always a dream of Schmitt’s, who says that a younger Casey would not believe everything that his future self has accomplished.

“I would definitely freak out,” Schmitt said with a laugh. “I’ve always thought of getting drafted since I was younger, so just for that to finally happen…for me, it’s just a very special moment for me and my family.”

For other children aspiring to play major league baseball, Schmitt emphasizes the importance of perseverance.

The impact that the coronavirus pandemic had on the sports world was significant, and brought with it a number of obstacles. But Schmitt recognizes how crucial resilience is in the face of adversity.

“I would just say to not get discouraged. Everything happens for a reason and stick to a plan and always work hard,” he said. “Don’t let anyone tell you that you’re not good enough.”