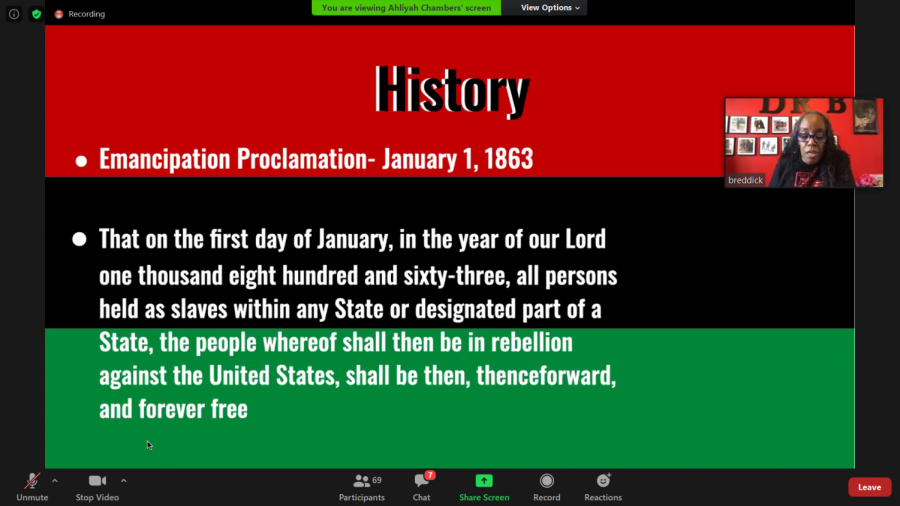 A screenshot of the Black Resource Center Director Bonnie Reddick discussing the history of Juneteenth.

In honor of Juneteenth, a day that signifies the end of slavery in the U.S. as the last enslaved African Americans in Texas were liberated on June 19, 1865, San Diego State’s Black Resource Center and Afrikan Student Union held celebrations via Zoom and Instagram Live.

The meeting dispelled some of the myths and lies that surround Juneteenth and discussed the importance of this sacred celebration in the Black community.

“Black people choose to celebrate Juneteenth in a multitude of ways, it is a time for us to reflect on our history and to ensure our children understand those areas of our history that are omitted or misrepresented in the master narrative about the period of enslavement,” Reddick said.

For Reddick, Juneteenth represents Black people’s resistance against oppression and the fight for freedom.

“The most important thing we want our children to know is that throughout this whole time Black people continued to resist. That’s part of the story that never gets told…We always resisted and sought our freedom,” she said.

Reddick also said Juneteenth is so important to Black people because it serves as a reminder of the sacrifices made by ancestors which allowed the Black community to be where they are today.

“When we get tired, when we want to give up, feel hopeless, we have to look back on all the Blacks who are named and unnamed who sacrificed their lives to ensure that we have a seat at the table,” Reddick said. “The fight continues.”

The meeting also highlighted a few SDSU students in the BRC community who have been actively participating in the recent protests occurring in response to George Floyd’s death.

Kinesiology sophomore Alyssa Dodson has been to protests in different areas with people of all races in attendance. To her, each one is a unique experience.

“Just seeing [non-Black] people not only being out there with us, but protecting us, has really been eye-opening to me,” Dodson said. “It makes me feel like even though we still have a long way to go, we have come a long way… I’m excited to see people stepping up and people speaking out.”

The Zoom session concluded with questions discussing what these protests mean to the Black community, the radical voice(s) of this generation, SDSU’s curriculum and how it has helped students understand the foundation of this country, and what stories the SDSU Black community want to be shared in the campus community.

Electrical engineering junior JJ Gaines said the story he wants people to know is that Juneteenth is about uplifting each other and Black people are about more than just slavery.

As for the second part of this Juneteenth celebration, the Afrikan Student Union held an Instagram Live showcasing Black artists within the SDSU and San Diego community, hosted by ASU President and psychology senior Kennedy Boyd.

Six performers, including Boyd, sang covers or their own original songs. Throughout the live stream, Boyd also provided fun facts about significant Black people who are credited for well-known inventions today.

Boyd said the Instagram Live served as a way to be as interactive as possible despite the COVID-19 pandemic, and a way to acknowledge the variety and talent of Black creatives.

“We wanted a way for the SDSU community and just the San Diego community to express their art, music, talent, love, and appreciation for their Blackness,” Boyd said. “The live contributed to this whole celebration of Juneteenth because it showcased the creativity and talent of our people.”

The first performer, Kia J. (@official_kiaj), sang an original song titled, “Revolution,” which she wrote a couple of weeks before the protests started.

She said the thought process behind this song was inspired by the built-up, ancestral pain she experienced as a dark-skinned Black woman. She is a huge advocate for black women and said that with everything going on, the world needs more love in order to heal.

For him, “Transcendent” speaks of all the challenges and emotions Black people face, and Black people’s fighting spirit. His unreleased song serves as a reminder for Black people to never forget where they came from.

Wilson said she chose to perform this song because it relates to the current social protests going on. After her performance, she said she hopes that during this year’s Juneteenth, the Black community can heal, celebrate and recognize the successful Black people around them.

Next, singer/songwriter Jenoah (@_jenoah_) sang an original song, along with his guitar, titled, “Like You Love Me.” He then performed another original song, “The One To,” after comments from Instagram Live viewers urged for an encore.

Before his performance, Jenoah discussed how the Black community continues to find ways to be resilient.

“No matter how hard things get, we always manage to find a way to still be joyful [through music], even while we’re fighting for change,” he said.

She said the unity and love during this time have been beautiful, and that the lyrics of this song give hope to the Black community.

To close out the live stream, Boyd performed a cover of the song “Read All About It” by Emeli Sande.

She chose to perform this song because she said it relates to what the Black community is feeling at this time.

One verse in the song says, “I wanna sing, I wanna shout,” and Boyd explained that these lyrics resonate with how Blacks will tell the story of today’s current social movement.

“We are not afraid to share our story, we are going to,” she said.

Both events signed off with a dance break of Beyoncé’s edition of “Before I Let Go,” the BRC’s and ASU’s signature song.