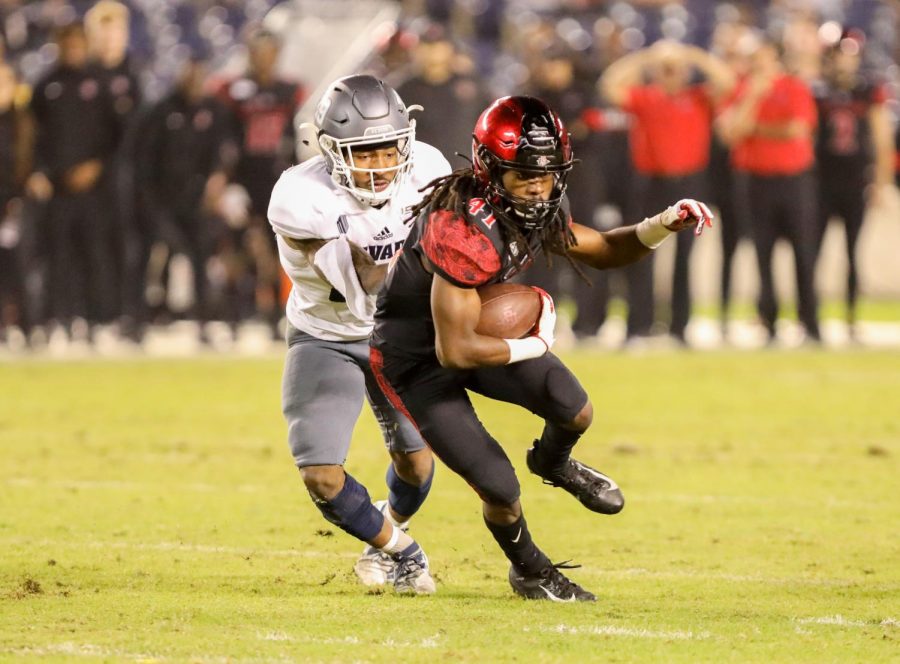 Then-sophomore wide receiver BJ Busbee attempts to escape a Nevada tackler during the Aztecs' 17-13 loss to the Wolf Pack on Nov. 9, 2019 at SDCCU Stadium.

The return date of July 7 is in accordance with SDSU’s second academic summer session.

California State University Chancellor Timothy White was expected to make a decision around June 23 regarding Division I athletes returning to campus, but CSU officials later announced they would receive counsel from Gov. Gavin Newsom before formally announcing a proposal.

During a July 1 interview with XTRA 1360 Fox Sports San Diego, athletic director John David Wicker said many student-athletes were returning to the College Area to self-isolate before workouts.

“We’ve got people back in town quarantining and taking the COVID-19 tests,” Wicker said on XTRA 1360. “It’s been a lot of work by a lot of people.”

Contact tracing will also be implemented, meaning student-athletes, coaches and staff will be notified if they were in contact with someone who tested positive for COVID-19.

Although student-athletes have returned to the Mesa, the spike of positive COVID-19 cases in California could delay the scheduled start of fall sports.

Some college football programs across the country have already been affected by the pandemic.

On June 20, 30 LSU football players were quarantined because they tested positive or were in contact with a carrier of COVID-19.

One of the biggest challenges SDSU could face is preventing internal outbreaks amongst student-athletes and other personnel.

But despite the uncertainties and new protocols in place, women’s soccer received some positive news as its 2020 season schedule was released on July 6.

Barring any delays to the start of the season, the Aztecs are scheduled to play Saint Mary’s in the team’s season opener on Aug. 20 at the SDSU Sports Deck.

SDSU’s out-of-conference opponents are all California teams, possibly in an effort to lower travel costs due to budget limitations.

The only out-of-state games scheduled are against Mountain West Conference opponents in Colorado State, Wyoming, UNLV and Nevada.

Another notable date on the athletics calendar is Sept. 5, when SDSU football is scheduled to kick off its 2020 campaign against Sacramento State at SDCCU Stadium.

While the health of student-athletes and playing the season as scheduled takes priority, the idea of socially-distanced fans attending football games has not been ruled out by Wicker.

In fact, Wicker said he anticipates fans being in the stands on Sept. 5 during an interview on 600 KOGO Radio.

“We are planning on fans being there as well,” Wicker said. “If something happens around coronavirus… then we’ll adjust to that.

“But right now we’re planning on playing football and as we get toward the end of July, beginning of August, we’ll definitely be making decisions on what that start of the schedule looks like and whether we’ll have people in the stands or not.”

SDCCU Stadium’s seating capacity holds over 70,000. The average attendance of SDSU football games in 2019 was 29,896. Similar numbers could allow social distancing protocols to be implemented.

COVID-19 has already impacted another school in the Mountain West. Boise State announced its swimming and diving and baseball programs were cut on July 2 as a result of financial losses.

In February, Boise State’s baseball program returned to play for the first time in 40 years. The Broncos finished 9-5 before the season was halted due to the pandemic.