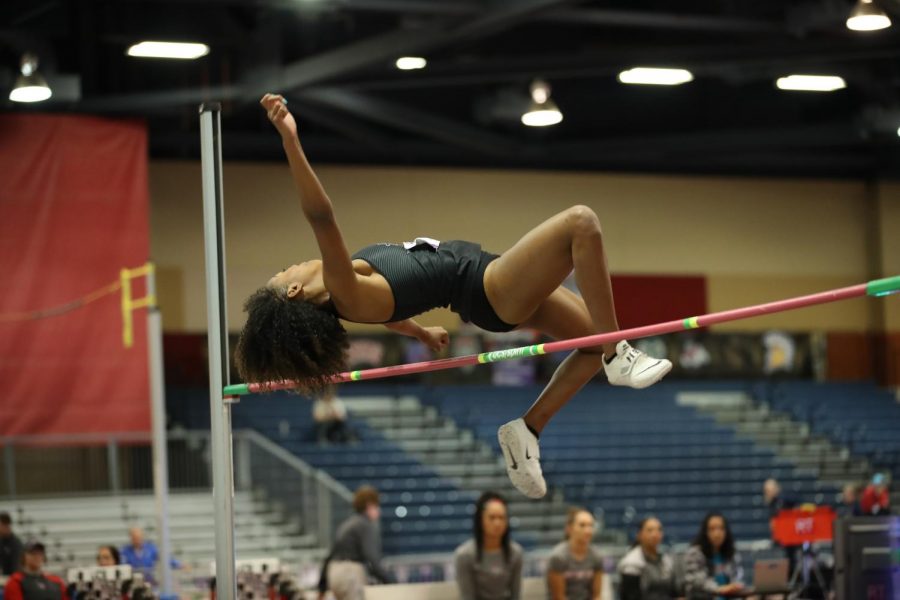 Then-junior Asia Smith was one of five Aztecs to receive All-America honors for the 2019-2020 indoor season.

For senior pentathlete Asia Smith, she was ready to compete in the outdoor season as well as NCAA competition.

The Daily Aztec talked to her about receiving All-American honors and how she has been training during an unpredictable offseason.

The Daily Aztec: How are you doing and how’s your family doing right now?

Asia Smith: “I’m doing pretty well. I’m still in San Diego and my family is still up in north county, so I have been keeping in contact with them. For the most part, I’m just trying to stay safe and do some training when it is possible.”

AS: “This season, our team did really well. We had a lot of great freshmen coming in, so it was really good to work with them for indoor season. It’s kind of sad we didn’t get to do outdoor (season) but overall, we have a really good group and I’m excited for us to come back next year and do even better.”

DA: What was your reaction when your team could not compete later into March and for the rest of the season?

AS: “I was NCAA Nationals along with the 4x400m relay team and we were in our hotel room the day before we were supposed to compete when we found our outdoor season and nationals were canceled. That was tough and we were talking to our teammates through our group chat back at (SDSU), it was shocking and we weren’t prepared for it at all. It was really hard, but we’re doing our best to keep moving forward and keep in contact and stay training this offseason to prepare for next year.”

DA: What was that feeling like for you to prepare for NCAAs in March, but then to see it get canceled?

AS: “It was really sad. I worked really hard this offseason and really set my goal to make it to Nationals so I was overwhelmingly excited when I actually did. Being there, it was already surreal and having it taken away did really hurt, but at the same time I feel lucky that I was only a junior this year so I do have another chance and another outdoor season along with the eligibility the (NCAA) is going to give us back for this outdoor (season). I’m looking to take advantage of these next few years.”

DA: You were recently named an All-American. What does it mean to have a title like that?

AS: “It was really great. As an SDSU athlete, there’s a lot of great people on the team who have inspired me like Ashley Henderson and Bonnie Draxler. I’m excited to be part of that legacy that those athletes have carried over and it feels surreal.”

DA: How does it feel to have an All-American honor and follow athletes like Henderson and Draxler?

AS: “It’s really great. I feel good putting SDSU’s name on an All-American list like that because we are a smaller school and we don’t get as much recognition in the media so having our name up there is really awesome and I hope to have a successful career like they have.”

DA: How much has Henderson and Draxler influenced you?

AS: “Seeing Ashley and Bonnie on the team makes you inspired. They’re very inspiring. Just their work ethic and everything about them stands out. I’m still hoping to be a lot like them and inspire my teammates in practice and competition.”

DA: You were with the 4x400m relay team when the season was cancelled. What was your reaction when you heard they also received All-American honors?

AS: “It was amazing. It just shows that there’s multiple amazing athletes on this team. It was the first time a SDSU 4x400m relay qualified for indoor. By doing that, they ran the same time they had at outdoor nationals the year before at the indoor conference championships, which is really cool because SDSU doesn’t have an indoor track and we don’t train in indoor facilities, so being able to run that fast indoor, shows how much potential they have for outdoor and I can’t wait to see how they do individually and as relay next year.”

DA: Since you compete in pentathlon, how do you prepare for five different events?

AS: “It’s a lot. I feel like you have to be a little crazy to want to do that many events. I really love them. Training wise, we practice two or three events a day. It takes a lot of focus, you have to be very adaptable, to be able to switch from your shot put mind to your high jump mind. Every event is really different but it is good to balance all of them and learn where your strengths are and improve on your weaknesses.”

DA: Your head coach, Shelia Burrell, competed in the 2000 and 2004 Summer Olympics in heptathlon. How much of an influence has she had on you?

AS: “She’s had a huge influence on me. I didn’t do the multi-events before I came to San Diego State and being coached by an Olympic heptathlete is just crazy to even think. I feel really lucky to have her. She knows how to coach each event and knows how to work with each athlete individually. If I’m not understanding long jump, she knows how to explain that specifically to me compared to other teammates. She’s really good at working with each athlete and understanding them. She’s a great coach and I look up to her and hope to be as great as her one day.”

DA: You grew up in Escondido, California — only 45 minutes away from SDSU. What does it mean to be a local product and be an Aztec?

AS: “I have always seen San Diego State around since I’ve grown up locally. I felt like it was a great choice to be here because I would be able to be close to home and still represent San Diego because I love this city and I’m glad I ended up here.”

DA: Looking ahead for the rest of this offseason, what have you been doing to stay in track and field condition?

AS: “It is a little bit tough, especially when we don’t have access to a track or we’re not able to see the rest of our teammates. Since I have been staying near SDSU, I have been running around the campus to know the area and my roommate is (senior Sakura Roberson), so we’ve been training together every once in a while.”