Opinion: Amazon warehouse jobs aren’t worth the salary despite the effects of COVID-19 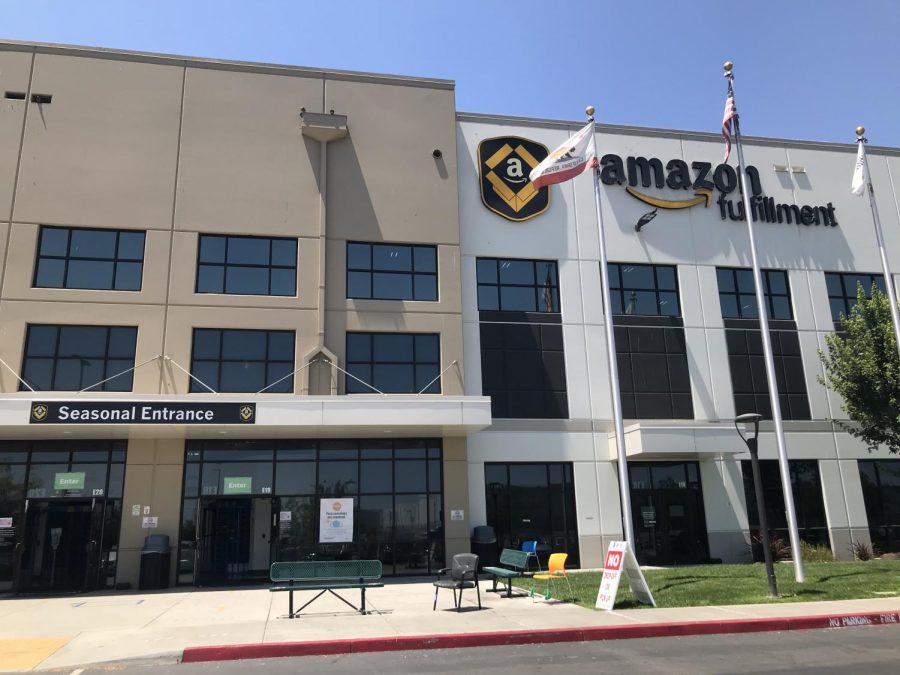 Outside of the Amazon Tracy fulfillment center.

In order to become a monopoly, a company must cut some costs to become profitable and Amazon is no stranger to this.

While Amazon offers slightly above average pay for almost every level of its company, is the pay worth it for its workers?

Working at an Amazon warehouse is appealing because the company pays above minimum wage and doesn’t require more than an application, background check and an online orientation program. For an entry-level job with no interview or degree required, it seems like an easy opportunity to work if one needs money quickly.

“My parents wanted me to get a job after I graduated high school to save up some money for college,” a former Inland Empire Warehouse worker and SDSU business student said. “I heard that Amazon was paying above minimum wage, so I was excited and they hired so quickly. Looking back it probably was a trap that they hired so quickly.”

We were all required to sign confidentiality agreements so many of the people I spoke to asked to be anonymous or be referred to by an alias.

“Being a business major, by raising workers’ pay during the virus lockdown, it has economic implications,” the same former Inland Empire Warehouse worker and SDSU student said. “It might make it tougher for other warehouses and smaller companies to hire people. When Amazon raised their salaries, it made them more of a monopoly.”

An Amazon Software Development Engineer agreed with this insight and believes this could be why Amazon has become so successful.

A former Tracy warehouse worker and San Joaquin Delta College student said the pay decrease after two months of lockdown was proof of Amazon showing no regard for their workers.

“That was like the biggest ‘f–k you’ to the employees because we’re doing a job that nobody wants to do in a pandemic,” she said. “They’re supposedly taking all these precautions to prevent the spread of the virus but we’re basically putting our lives at risk and all our loved ones at risk all for $2 more an hour.”

The same former Tracy warehouse worker found the work humbling but felt like a slave for the corporation after working there for five weeks.

This location implemented virus preventative measures such as requiring every worker to wear a mask while inside, undergo fever screenings at each entrance and practice social distancing during work and breaks.

Despite these measures, this location reported at least 24 cases of COVID-19 and one COVID-19 related death among its workforce as of July 29, according to a current Tracy warehouse worker and Modesto Junior College student. Every worker at the warehouse was notified of each new case and would be individually contacted if they were ever in close proximity to the infected person.

“After they told me about the first case (at my warehouse) I took a day off,” Mount San Jacinto College student and current warehouse worker Rose said. “It’s really nerve-wracking knowing somebody got it and they were just around you. Everywhere I go, not just at my warehouse, people don’t know how to wear masks–they don’t put it over their mouths properly.”

Rose, who asked to be identified by her first name only, is a part-time student and has worked full-time at Amazon on-and-off in three different warehouse locations in Southern California to support herself financially. Her warehouse in San Bernardino had three new cases of the virus over the span of three weeks.

A current Stockton warehouse worker said their location has 10 cases of the virus as of July 14.

A former Tracy warehouse worker student described her experience with Amazon’s Human Resource department when she feared she may have been exposed to the virus.

“I was with someone who had contracted the virus, my friend, and I took it upon myself to take a temporary leave,” she said. “After I got my results back, I was negative so I was able to return to work. I emailed H.R. describing how I wasn’t at work because of the potential risk, but I still received a termination letter.”

Even before the virus, some workers had issues receiving adequate healthcare from injuries sustained on the job.

Rose sustained an injury her first week working for Amazon a few years ago and described how the medical professionals at the locations she worked at were hired through a for-profit clinic.

“We were working 12-hour shifts that week and I had left early and when I was walking out they have these rubber guards that are supposed to be glued down so they don’t move, but at my building they didn’t take the precaution to glue it down,” Rose said. “My foot got caught in the turnstile while I was walking out and instead of that rubber guard preventing it, my foot got completely smashed. It kind of ruined my arches.”

Rose said Amazon’s response to her injury was more focused on speed rather than the quality of care.

“They offered me worker’s compensation, but it was a really difficult process,” Rose said. “With Amazon, they go through a for-profit clinic, so the doctors aren’t really focused so much on the healing and recovery of their employees. They’re more focused on just getting them in and out quickly.”

The warehouse Rose worked at didn’t allow her to do any physical therapy to help fix her muscle injury and didn’t conduct the required M.R.I. until a month after the injury.

Former Tracy warehouse worker and MJC student Elianna said on her last day, she was feeling light-headed due to her anemia and the nurse at her warehouse told her to go back to work and call her personal doctor later.

“I literally got so mad that I just left because I was so done,” Elianna said.

Rose, who has worked in other warehouses, said Amazon has some of the highest safety standards among warehouse jobs.

However, other workers said they felt the conditions weren’t as safe as they could be.

“The conditions were so different from my past jobs,” Elianna said. “I thought they were going to be so much better compared to what they were telling us in orientation in terms of conditions and breaks. In the video, it seemed like we were going to get more training, but we didn’t. It was just two days.”

According to Rose, Amazon specifically overworks their employees to an extremely unhealthy point and other workers agreed with this.

“Every single one of them looked like they wanted to die,” a former Tracy warehouse worker and SJDC student said.

Both Rose and the former Tracy warehouse worker mentioned how they noticed their coworkers seemed depressed and most turned to alcohol or drugs to cope.

“Everyone I know that works there is either an alcoholic, depressed or a drug addict,” Rose said. “I don’t think this is a common thing among other warehouses. I think it’s just with Amazon because they make us work 10-hour shifts and 12-hour overtime days.”

Food in the break rooms at Amazon is not free for workers but vending machines at Amazon provide workers with free over-the-counter painkillers such as Ibuprofen and Advil.

“For how hard we work, that stuff in the breakroom should’ve been free or cost a lot less,” Eliana said. “They were overpriced. With the painkiller vending machines, I don’t know how I feel about that because Amazon doesn’t really check if they’re hiring drug addicts and that could be enabling them.”

The Amazon warehouse job application said a urine drug test would be required, but I, along with some of the other workers I spoke to, never took one.

Additionally, I was told if I wanted to be hired on as a full-time associate, I would be required to undergo a mouth-swab drug test.

Most of the workers I interviewed lasted about three to five weeks working in an Amazon warehouse and the Amazon Software Engineer Programmer said he noticed quick turnover at his level in Amazon’s organization too. He quit after only a year.

While Amazon has created jobs and stimulated the economy during their precipitous rise, its warehouse conditions still exploit many workers and haven’t significantly improved over the years.

Many of the workers agreed that the pay and consistent hours were the best part of the job but they didn’t see themselves working there forever.

The views and opinions expressed in this article do not necessarily reflect those of The Daily Aztec.