MWC joins the growing wave of conferences canceling their fall seasons due to health and safety concerns. 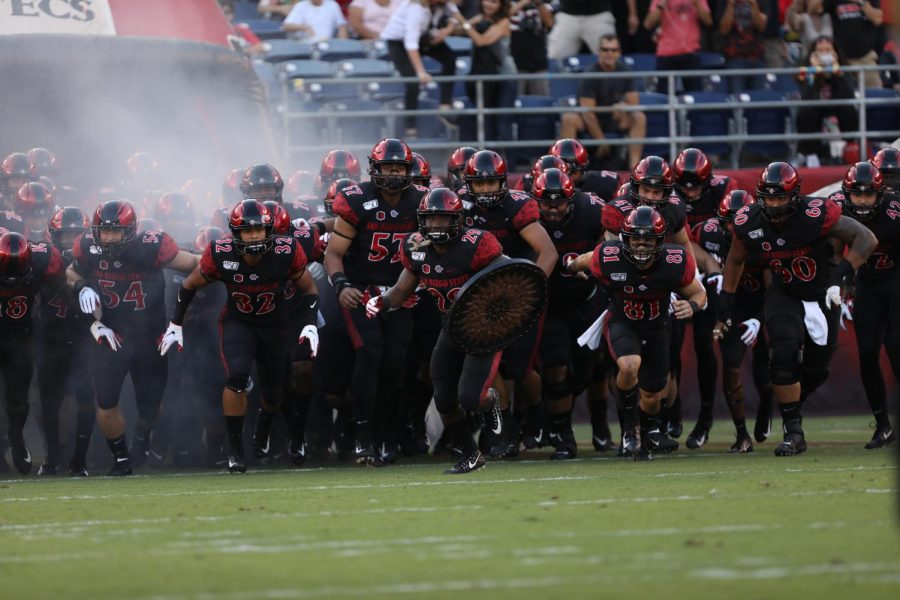 The Mountain West Conference announced fall sports — including football — have been postponed on Aug. 10, but did not rule out the possibility of a spring 2021 football season.

The Mountain West Conference announced fall sports have been postponed due to safety concerns surrounding the COVID-19 pandemic, according to early reports from Stadium.

Four San Diego State programs will be impacted by the decision, including football, women’s soccer, women’s volleyball and women’s cross country. All fall competition in men’s and women’s golf, men’s and women’s tennis, women’s track and field, women’s swimming and diving, softball and baseball was canceled last week in a different announcement by the conference.

The Mountain West released a statement following Monday’s decision, stating the conference “will begin to explore the feasibility of rescheduling fall sports competition, including the possibility of those sports competing in the spring, and develop options for consideration.”

The ruling, according to Stadium, was made in a “vote of league presidents Monday.”

SDSU football head coach Brady Hoke said he understands the postponement but is saddened for the student-athletes affected in a statement via GoAztecs.

“Although today is a difficult day, we know that we are making changes to the schedule for the safety and health of the players, and that is always the right thing to do,” Hoke said. “I am very disappointed for our student-athletes.”

The Mountain West isn’t the first conference to cancel all fall sports, however. It joined another Group of Five member in the Mid-American Conference, who opted out of playing fall sports on Aug. 8.

As of now, 26 total FBS programs will not participate in a fall football season— but that doesn’t rule out the possibility of competition in the spring.

SDSU senior tight end Nolan Givan, who transferred from Ball State this past year, won’t be able to play in an Aztec uniform this fall. He reacted to the conference’s decision on Twitter:

Sophomore guard William Dunkle, who had a breakout freshman season starting in 12 games for the Aztecs, expressed his disappointment:

I was tryna ball.

Listen DON’T HIT ME UP RN

Last week, the MWC announced it would revert to a 10-game football schedule with eight in-conference and two-out-of-conference games with the season beginning on Sept. 26.

On Aug. 6, MWC football players from various universities took to Twitter and other social media platforms by storm with #MWUnited. The movement advocated for more safety measures, eligibility and scholarship reform and player assurances by the conference.

No Power Five conferences — including the Pac-12, which SDSU men’s soccer is a member of — have yet made a decision on fall sports.