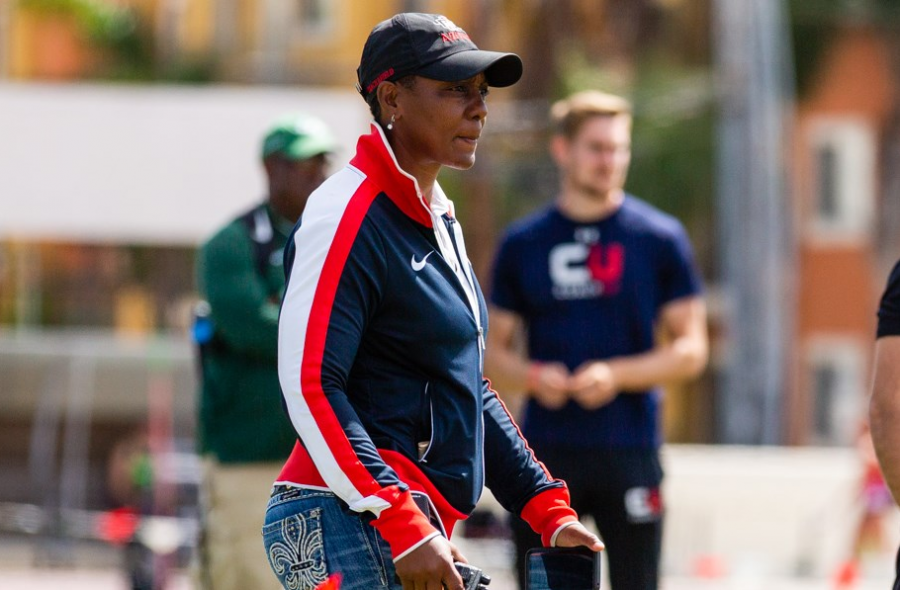 San Diego State cross country and track and field head coach Shelia Burrell has seen almost everything when it comes to distance running or field events.

The Daily Aztec talked to Burrell, a four-time Mountain West Conference Coach of the Year in track and field, about coaching two SDSU programs as well as her experience in the Olympics.

The Daily Aztec: What have you been doing right now and in these last few months without competitions?

Shelia Burrell: “We have been trying to get everyone prepared for practice. We know that the season has been postponed or canceled. We’re still able to train, although we haven’t started yet because we have to go through our repopulation protocols with regards to quarantine and COVID-19 testing and social distancing guidelines as well as education for the student-athletes and staff. There has been a lot of Zoom meetings and a lot of writing and rewriting of a plan.”

DA: What was your reaction to this upcoming cross country season getting postponed?

SB: “There have been a lot of conversations going on, even before we got a decision. There’s been multiple meetings and releases of decisions by conference, NCAA. If you’re looking at the landscape of the sport, you’re watching other conferences postpone or delay the cross country season. We were waiting to see what was going to happen in the Mountain West. It was more so awaiting to see the decision by the conference and our university.”

DA: If the cross country season went on as initially scheduled, what should we have looked forward to?

SB: “We have a young team. The hardest, most difficult thing with what’s going on right now is keeping the cross country girls motivated because we’re asking them to hurry up and wait in a lot of ways. We go from telling everyone we’re changing gears, because each day, there’s new information that comes out. They want to compete. They’re here on a college scholarship, that’s what you’re here to do. I think the idea of being able to compete and to work toward a goal especially for the freshman, who are now in their second year, that’s something that is meaningful. I think that the four years you spend at your university, you want them to be meaningful, you want to have a positive experience and unfortunately, we’re trying to make the best of a pandemic for some competitive opportunities.”

DA: On your roster, you have five runners who are from San Diego. What is it like to have San Diego natives in the program?

SB: “Since I first came to San Diego State, there weren’t a lot of San Diego athletes on the team and we’ve done our best to keep kids in San Diego. We are still a developing cross country team. We’ve been able to attract local talent and develop talent so that we can show and progress athletes to get more athletes to come.”

DA: A couple months ago, we talked to Asia Smith. What was your reaction when you heard she received All-American honors?

SB: “She’s a local kid from Oceanside. I was very happy and very proud that we did exactly what I said we wanted to with the cross country girls. You take a local kid and develop them. They’re developmental athletes in high school. Asia was the cream of the crop coming out of high school. She wasn’t winning state (championships) and all those things, but she came to college and became an All-American. That’s pretty cool, right?”

DA: In addition to Smith receiving All-American honors this past spring, what was your reaction when you heard the 4x400m relay also received national recognition?

SB: “We have actually been planning for that 4×400 team to go to nationals. We recruited that team to eventually break the school record. Our school record is 3:30 in the 4×400. We run 3:30 in the national championship and score in the top eight in the country. That is something that is a huge accomplishment for this program. First of all, it’s never been done before. I have a saying for my team: ‘In order to do something you’ve never done before, you have to do something that you have never done before.’ That 4×4 record was set by some legends (back in 1985). The likes of Latania Sheffield, who is an Olympian, Renee Ross, who is school record holder in 800 meters, there were some heavy hitters that were on that 4×4 record and it’s our goal to put a team together that can break that record. Hopefully over the next two seasons, we continue to progress to breaking the school record and being able not just All-Americans but being NCAA finalists at the championships in scoring at nationals.”

DA: You competed in the 2000 and 2004 Summer Olympics in the heptathlon. What were those experiences like?

SB: “They were pretty amazing. They lend a lot to my abilities to communicate to my athletes the kind of mindset it takes to be a high-level athlete. ‘Once an Olympian, always an Olympian.’ I look back at my experience and I scored in Athens and as disappointed as you score and not medal, it gave me valuable experience to be able to share with people that I coached. I coach collegiate and professional athletes. Being able to coach another athlete to a world championship or preparing for an Olympic games. Those give me valuable insight on how to coach and prepare my athletes for championships or competitions.”

DA: How much have you talked to former SDSU runner Ashley Henderson about the Olympics that have been postponed until 2021?

SB: “I talk to Ashley all the time. We have a good relationship. We have talked quite a bit (about the Olympics). Their Elite season, they were still training. I have two athletes I’m coaching here in San Diego that have been preparing for the Olympics. We were anticipating whether they were going to have the Games when, how or where, for that matter. And as things broke down because of the COVID-19 pandemic, Ashley continued to train. You still have to train at that level because just because there are no Olympics and at that level of competition, you give your body the time time to make major adaptations whether you aren’t going to compete. Many world records have been broken, even though there are no Olympics this year. People have had personal records set in spite of the pandemic.”

DA: How much more time do you have right now in terms of recruiting for both the cross country and track and field programs?

SB: “We’re still recruiting. We’re recruiting all year. It never stops. Recruiting doesn’t stop and start with the beginning and end of seasons. It actually continues to go. It is making phone calls, identifying athletes, connecting with people, watching film, talking with coaches. That is one part of the job that never stops.”