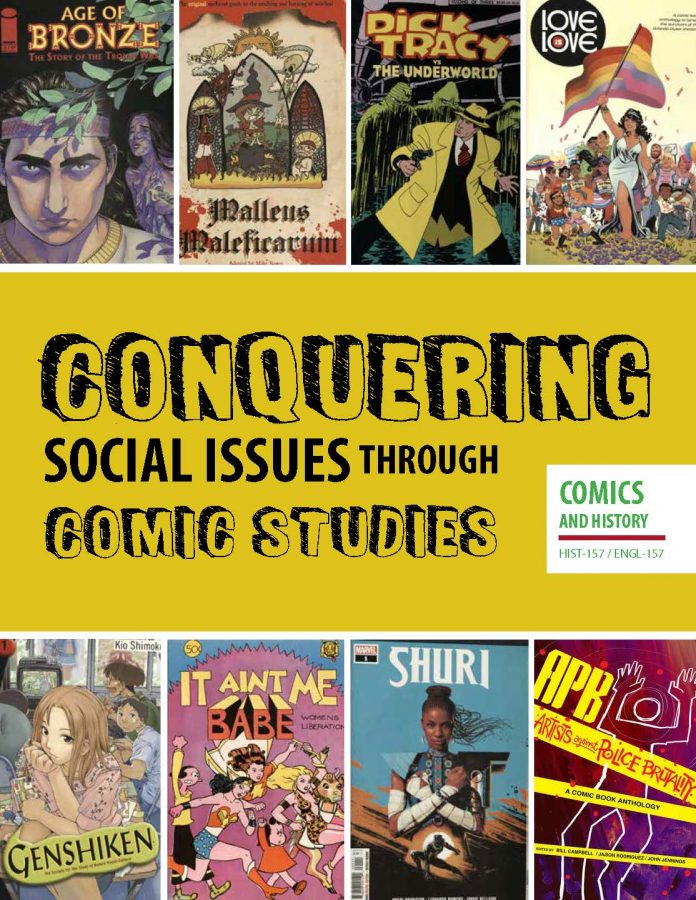 Comic lovers can bring their passion to the virtual classroom with a new history course at San Diego State this year. Conquering Social Issues Through Comic Studies, listed as HIST 157 in the class schedule, will satisfy the C1 Arts General Education requirement.

The course will cover various social justice issues such as racial injustice, women’s portrayal in comics, religious pluralism and more.

Dr. Elizabeth Pollard, one of the course’s many professors, said she wants to focus on comics from around the world and throughout history.

“Comics are a place where so many social issues get hashed out,” Pollard said. “It’s a genre where social issues are constantly being struggled with.”

Among the books Pollard plans to discuss is “March” by the late congressman John Lewis, “They Called Us Enemy” by George Takei and “Maus” by Art Spiegelman.

Pollard, a history professor and comic enthusiast, first proposed the course in 2018 as part of her team’s Big Idea project. She said she was inspired by her long-lived passion for comics, which was palpable even through Zoom.

“I started reading comics in the ‘70s,” she said. “Like every kid in the ‘70s, you look forward to the Sunday paper because it had color comics, and then you’d try to sneak it away from your parents at the breakfast table. There was everything from Peanuts to Garfield…and then the grown-up comics that nobody thought were funny when they were little.”

Every weekend, Pollard said, she and her brothers would go to comic book stores and dig through the bins until they found their favorites. Hers was “Wonder Woman.”

“When I was little, I was into comics,” she said. “When I got a little older, I got into the bigger pop culture things. Conveniently, almost everything makes its way into a comic form.”

Pollard said she never imagined her first time teaching HIST 157 would be virtual.

“When I proposed this class and developed the first version of the syllabus, I had no idea that the first time the course would be taught would be in this very unusual time of COVID and not being able to meet face-to-face,” she said. “I’m not going to see that as a drawback. We don’t have to settle.

“But it does mean I have to rethink a little of what I initially envisioned for the course.”

Part of that reimagining involved how students would access the various comic books which the curriculum called for.

“Comics are such a visual medium, and you kind of need to see what you’re talking about,” she said. “We’re going to take advantage of the digital and not see it as a drawback but an opportunity.”

“One of the things we were going to do is get into Special Collections and interact with the huge collection,” Pollard said. “Obviously that’s not going to happen with COVID. And so, Pam Jackson has been creating a lot of digital content for the course.”

Digital Humanities librarian Pam Lach will aid students in creating one of their major projects: a timeline of comics. Pollard said this timeline will be a major tool for students throughout the course.

Keeping with the digital spirit, Pollard’s twitter, @sdsu_h100, is already full of intriguing tidbits about comics throughout history. She even created the hashtag #ComicsAndHistory for this class.

“(Twitter) is a big part of how I try to create an interactive classroom,” she said. “I like class to be not just in the room but also everywhere that students are.”

The course is available this semester as both HIST 157 and ENGL 157. A list of other comic-related courses in various disciplines and can be found on the Comics Working Group website.

There’s still time to enroll before the September 4 add/drop deadline.