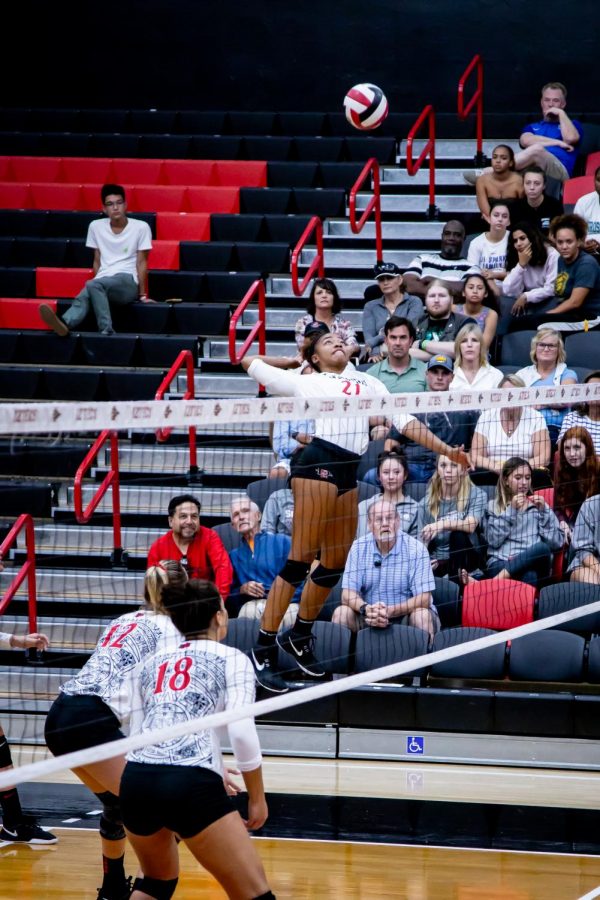 As the COVID-19 pandemic continues to affect the U.S., the Mountain West Conference announced the postponement of fall sports indefinitely.  San Diego State’s women’s volleyball team is taking this news in stride.

Throughout the summer, the hopes that fall sports could continue to play regularly were fleeting. But with the indefinite postponement of the season, teams were given some clarity and can now settle into new safety protocols and begin to cope with the idea of playing at a different time than usual.

Junior outside hitter Victoria O’Sullivan said the season postponement did not impact the team’s work ethic.

“I don’t think anybody’s mentality has changed,” O’Sullivan said. “We’ve definitely been drilling it into everybody that this is the time to work and not lay back.”

Practices look a little different now, but senior outside hitter Erin Gillcrist says there is a silver lining to the safety protocols put in place to maintain players’ and coaches’ health.

“We’re spread out on the field but that doesn’t change the fact that people are still trying to talk to each other, talk across from far away and encourage each other during our runs,” Gillcrist said. “I think if anything, it’s forcing us to learn how to communicate a little bit better. But everyone is still working just as hard, if not a little bit more focused since we do have all these different rules and regulations now.”

Players and coaching staff must maintain social distancing while practicing, prompting the team to come up with new drills to ensure safety guidelines are being followed. This has made it harder for the team to bond with new student-athletes coming in, as well as the new staff hired in the last offseason.

“For the new girls, it’s kind of weird because normally we would all be hanging out and doing stuff together on the weekends or going to get food,” Gillcrist said. “I’m not, at this point, as close to all the new people as I would like to be, but they all seem really nice and they’re all working hard. Eventually, hopefully in the next few weeks, we can actually bond.”

“We’ve utilized what little we are able to do, especially in phase one of repopulation, to really be grateful, more so than we would normally be and get to know each other through smaller increments,” Hilliard said. “We’re learning to be grateful that we are able to be with each other. We know the regular student body doesn’t have that same luxury in some cases.”

Although the team is not able to socialize like they normally would, the athletes are still able to bond due to the seniors stepping into new leadership roles.

Hilliard said O’Sullivan and Gillcrist have helped strengthen the team’s cohesion during this new setting.

“(O’Sullivan) gets everything down packed: physically, mentally and off the court stuff. She’s on time, she’s leading drills that she does, she’s a really good person to watch while you’re out there,” Hilliard said. “And Erin Gillcrist, who is also strong physically, is banged up right now and has injuries, but she does a really good job of keeping her teammates engaged with her verbal skills. She’s amazing.”

Despite the new safety protocols and season postponement, O’Sullivan says the team’s chemistry has only grown stronger which is a bright plus in a disappointing time.

Even with new regulations and the uncertainty of an indefinite season postponement, the Aztecs are still working hard in hopes they can play in the spring and continuing to improve, Hilliard said.

“The synergy within this group is really amazing thus far. I’m extremely happy with the way they’re working, their tightness,” Hilliard said. “They understand that we’re still training for something, our season’s been postponed, we have light at the end of the tunnel. We realize that we need this time together to build, to get healthy, and when we do have that season, we’re going to be really ready.”