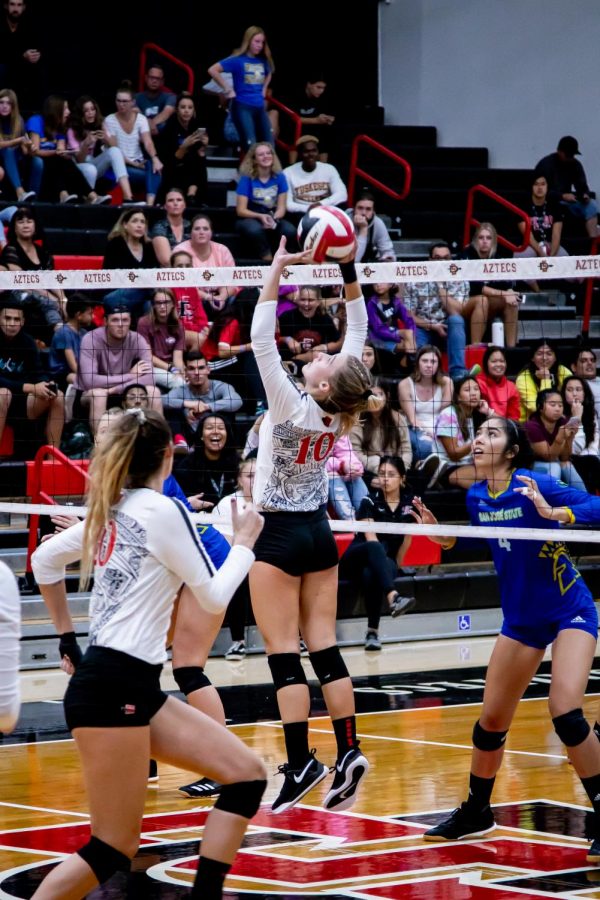 Then-sophomore setter Camryn Machado attempts to pass the ball to a teammate during the Aztecs' 3-2 win over San José State on Sept. 26, 2019 at Peterson Gym. Volleyball was one of many SDSU programs affected by the Mountain West's Conference's decision to postpone athletics due to the COVID-19 pandemic.

About a month ago, the Mountain West Conference announced the postponement of fall sports due to the coronavirus pandemic.

Although changes and announcements have been made since then, San Diego State players and coaches have reacted to their seasons being put on halt.

Now, it is our writers’ turn to give their perspective.

What was your first reaction when you heard the Mountain West postponed fall sports?

Freund: “Honestly, I was not really surprised. I kind of saw this happening when other smaller conferences started cancelling their football season and fall sports season. Even when I saw rumblings of the Pac-12 or the ACC cancelling their season, I knew it was only a matter of time before the Mountain West would do it.”

Freed: “After all the other conferences started to go down south and every other conference getting cancelled, I kind of expected it to come up. Obviously, safety of people comes first, but this is really hard on the college athletes because they want to play and some athletes are already petitioning to have a football season and other sports. I think it goes both ways, but safety of people would have to come first.”

Savoie: “Honestly, from a logistical point of view, I was shocked because I have never known close enough a year without sports. Especially writing for The Daily Aztec, I was a little sad, but mostly shocked because we work in the sports section, so I was a little nervous because it is definitely difficult to not have sports when that is our main subject matter to write about. After the initial shock went away, ultimately, I was glad that they decided to do that. For the safety of players and their health, I think that was the right decision. So definitely surprised at first.”

Diana: “Honestly, I was a bit shocked because with MLB and NBA currently playing, I thought they were going to have college football. And the NFL talked about how they would have a season, some with limited fans in attendance and I was like, ‘Oh, OK, it shouldn’t be a big deal.’ I was shocked, honestly. I didn’t expect it to come from football. I thought football would for sure be going, especially since it has been so far removed since it originally started.”

What are you going to miss the most as both a fan and a writer?

Freed: “As a fan’s perspective, I like to go to all the games because they are always fun. The Show is always crazy every night. It is going to games and enjoying it with your friends. As a writer, it really sucks because we like to cover these games, they’re fun to write about them and we get the adrenaline of being there and it is pretty special to write sports.”

Savoie: “I feel like (my answer) is going to be similar for both. The thing I am going to miss the most is just honestly being there. The whole atmosphere of being at games both as a spectator and as part of the media that is so special. The environment that you’re in – everyone’s hyped up and there’s a huge community. I am going to miss that so much and especially not even being able to watch that from home is going to be hard. In terms of a Daily Aztec standpoint, I loved going to games and watching it from a more analytical standpoint as opposed to a fan’s standpoint and being able to talk to the athletes. That was always so cool. That is something that will be a little hard to swallow. From our fan’s point of view, it’s a similar thing by not being able to watch and support our team this year. This is when sports ended abruptly back in March and now we were all counting on them coming back in the fall, so that’s going to be hard, not having something to cheer on. 100 percent.

Diana: “As a writer, I am definitely going to miss the opportunity to potentially cover football. Last year in the fall, I wasn’t a part of The Daily Aztec so I didn’t really have the opportunity to cover a football (game) or any fall sport. I am a big football fan, so covering football would have been one of my goals to eventually do. That is going to be a bummer as a writer.”

Were you in favor of the MWC postponing fall sports?

Freed: “Obviously, I wasn’t in favor of it because for our Daily Aztec quality sports writers, it’s really fun for people to come witness it. Maybe they could have come up with different ways on how to create a season for a season to be happening. It’s tough, but for college athletes it really sucks for them, and obviously fans. If it is going to decrease COVID, then hopefully it works out. But hopefully Mountain West sports comes back next semester.

Savoie: “Yes I was. It was surprising at first, but I think it was the right decision. I love that they are looking out for the players, especially because these players aren’t getting paid and it is not fair to us to put their health on the line so the school can make money and people can be entertained. We’re in the middle of a pandemic and there are a lot of things that are a lot more important than sports right now, so honestly, I am really glad that they postponed the season as difficult as it is. Obviously, I am sure the athletes were upset by it because it is a huge part of their lives and it was taken away, but those sacrifices need to be made in situations like this. It is super unprecedented and I definitely stand by the Mountain West and all of the other conferences.

Diana: “I wasn’t really in favor of it because of  it. When it comes to the NFL draft prospects, guys like Joe Burrow would not have got drafted (if the season was not played last year) at least not in the first round. It is going to affect a lot of future (prospects), especially when it comes to the NFL draft and eligibility, too. You’re going to have to deal with seniors that could potentially return and cost the incoming freshman, who may have committed there for football purposes only. And how players are going to deal with it because certainty is the best thing you can have. At least in an uncertain world of sports, anything can happen. It’s good to at least have a certainty of the next game is this day and our next practice is here so I can go out and redeem myself, but that’s not going to happen and it is kind of a bummer. Especially for those athletes that want to get drafted and are here at San Diego State, potentially on scholarship, playing football, there are a lot of moving parts.”