Q&A: Lauren Lee talks about her offseason, experience as a transfer 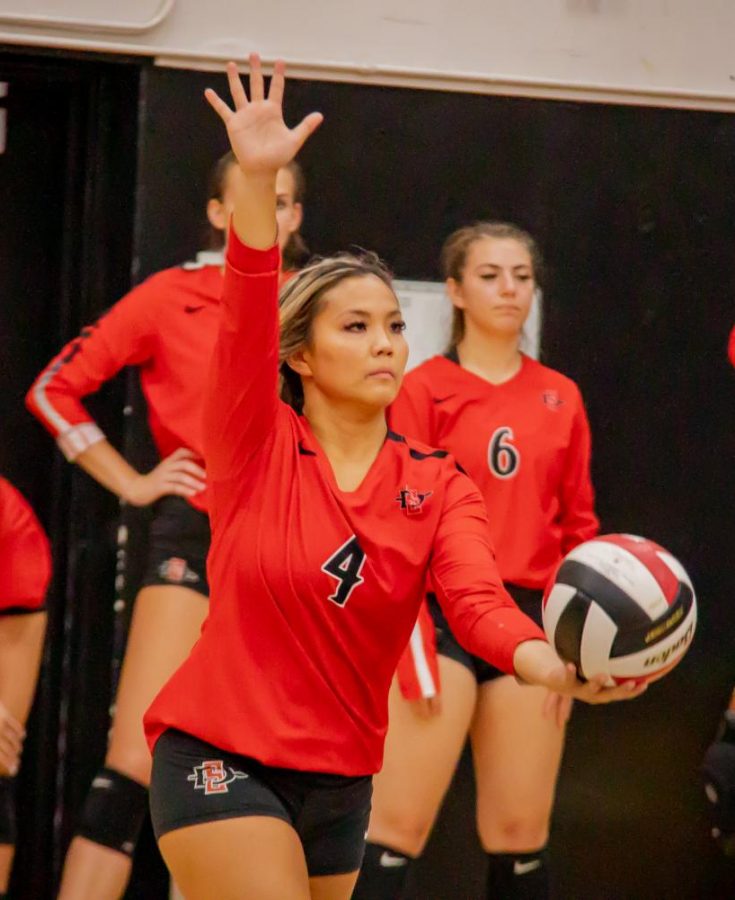 Then-junior defensive specialist/libero Lauren Lee prepares to serve the ball to Arizona during the Aztecs' 3-0 loss to the Wildcats on Sept. 7, 2019 at Peterson Gym.

San Diego State volleyball defensive specialist and libero Lauren Lee came to The Mesa in 2018 after transferring from Rice University.

Since then, she has spent the last three years in an Aztec uniform.

The Daily Aztec talked to the Coppell, Texas native about playing volleyball during the coronavirus pandemic as well as taking a trip down memory lane over the last three years as a collegiate athlete.

The Daily Aztec: What was your reaction when the fall sports season was canceled after the Mountain West Conference said a season was possible the week before?

Lauren Lee: “I just remember a week before we were all in preseason, we were all really excited. I was really looking forward to working with (head coach Brent Hilliard). We obviously didn’t get that much time to work with him in spring so it was exciting to work with him in the fall and keep going with our season. But I was pretty sad and it was heartbreaking to have something been told, ‘you’re going to play’ and then the next week, it’s the exact opposite. Being a senior too, I think added to the emotions and I cried several times. But at the end of the day, I’m glad we played through the plan and we know what’s happening and it’s set in stone now where we are working in the fall to compete in the spring.”

DA: You brought up your head coach, Brent Hilliard. How has the interaction been with the players and both Hilliard and assistant coach Steve Timmons?

LL: “I played for a pretty high-level volleyball club in Texas and Brent and Red (Coach Timmons) used to coach against one of our rival clubs that we always played at nationals growing up. I actually remembered them from playing against their teams in club volleyball. It was really cool to see them as an opponent and then now from club volleyball is really good. Having Brent being my coach and being able to interact with both him and Red is really awesome. They bring such good energy to the gym and I think that they are such a good pair for our group of girls, especially trying to build a program and get us to where we need to be.”

DA: Before SDSU’s two-week quarantine was announced (which we’ll get into in a little bit), what have you and your team done for practices?

LL: “At the beginning of the season, we were in phase one only doing outside training with one ball. You’re not allowed to touch each other’s ball, so it was individual training. Every now and then we would go play beach volleyball with each other to stay in shape and we were playing at my house Spikeball, which has been really fun to incorporate some of the aspects of volleyball and the game with our friends. Then, we got suspended last week of working out, so right before that, we were actually able to go into the gym and play pepper with each other and have the coaches initiate that. That was really fun and enjoyed doing the work with Brent because he gets inside and works with the team because there is more working together, there is more of the positional work.”

DA: SDSU announced a two-week postponement of athletic activities due to the rise in COVID-19 cases on campus. What are you and the team doing during the short period?

LL: “We started quarantine for two weeks and then we are looking to head back out. We are working out, making sure we are going out on runs or doing some kind of workout with bands and jump ropes when we first started quarantine because we’re not allowed access to the facilities. But, we are still working out and being sent rehab schedules. We are still training even though we aren’t training with athletics. We’re still expected to be 100% ready to go and we’re training this fall as if it was our spring and we’re getting ready to play in the fall. That is our mindset right now. Get out and run and meet out at Hepner Hall and we’ll run together. Even though we’re not having mandated workout, we’re still getting together and doing better.”

DA: Looking back at your collegiate career, what was the transition like going from playing at Rice University to playing at SDSU?

LL: “I played at Rice University for my entire freshman year. I played in every match and it was really good to have that experience before coming to SDSU. Definitely different cultures. I went to a public (high) school in Texas and sports was everything. Playing in Texas and growing up really prepared me for the collegiate level because it is so high-paced and intense in my area. It wasn’t too hard and when I got here, I really enjoyed my teammates at San Diego State, probably the reason I love this program so much.”

DA: What were some things you took away from last season being on a team that went 15-14?

LL: “One of the things I learned was that we were not a very good team on the road. Playing at home, we were phenomenal. We knew that on our home court we had that advantage. But we needed to bring that same mentality on the road and couldn’t quite figure it out until the end of the season so maybe carrying it out into this next season, just being able to perform no matter where we are and no matter what city we are in. That kind of correlates to the COVID-19 pandemic. No matter what happens, it’s all unknown and just being able to adjust and still put forth the same amount of effort whether or not we are playing in our home gym.”

DA: From the first game you witnessed at SDSU, what match do you remember the most?

LL: “The USD match when we swept them in three at home. That was probably the best match ever that I’ve ever been a part of. Another one that happened, that was more recent was about a year ago when we played West Virginia at home and won in five sets in such a close match. We just came ready to play…”

DA: What’s the message for the rest of the fall and into the spring?

LL: “I think the message is to continue to focus even though it is hard because everything is so uncertain. We were actually the only San Diego school to work out in July and August so I think that to put in perspective, it is a blessing to be here and it is a privilege to be here, it’s not just an expectation, something that in perspective as we focus on following the protocols for the fall and then we’ll see in the spring where we’ll use all of our training when we did and to be the best ones out there.”