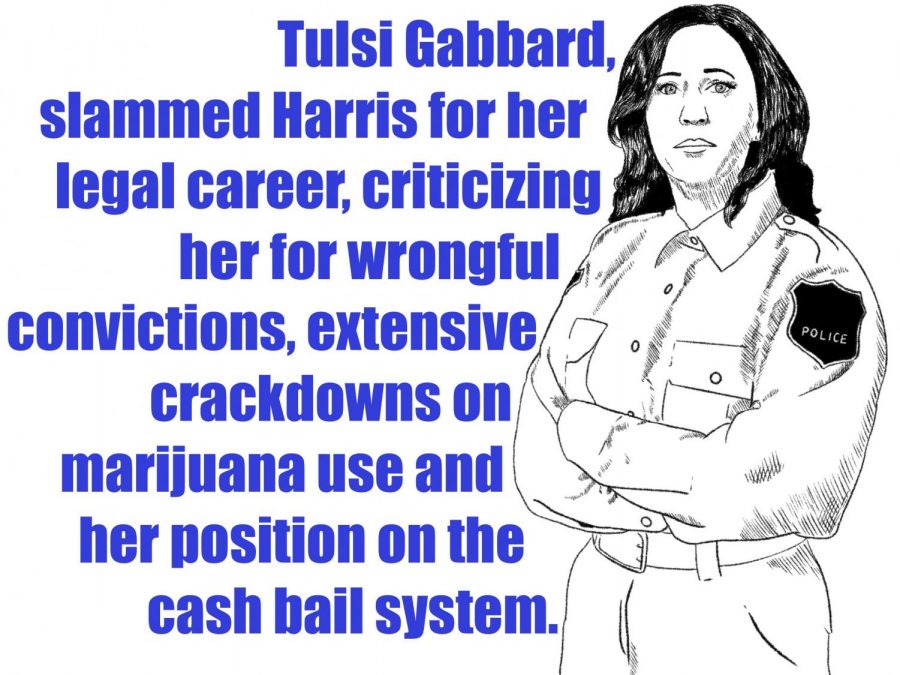 On August 23, Joe Biden and Kamala Harris conducted their first joint interview as the Democratic presidential ticket for the 2020 election.

Senator Harris’ VP nomination comes at an opportune moment in American history, one that calls into question the status quo in regards to racial disparities and the institutions that safeguard them.

Despite the significance of being the first Black woman and first Asian-American woman to be nominated as Vice President, Harris’ unique history as a prosecutor has been a double-edged sword for her among politicians and voters alike.

During Saturday’s interview with Robin Roberts, Joe Biden discussed his admiration for Harris and “the way she was a prosecutor” while tackling big banks as well as the gun lobby during her time in the Senate. Her tenacious and persistent nature has characterized her political career, but it has earned her as much criticism as it has praise.

In this year’s Democratic debates, Representative and former presidential candidate, Tulsi Gabbard, slammed Harris for her legal career, criticizing her for wrongful convictions, extensive crackdowns on marijuana use and her position on the cash bail system.

With her “top cop” and “progressive prosecutor” status, progressive and independent voters may have some misgivings about how Harris will be able to amend racial relations with law enforcement, especially as tensions with the police rise in the wake of the shooting of Jacob Blake in Kenosha, Wisconsin.

Harris’ 2009 book, Smart on Crime, has been a significant talking point in the conversation about her views on the police. In the book, she expressed positive views about police presence in the United States, claiming that “virtually all law-abiding citizens feel safer” with police officers around.

In Saturday’s interview, when Roberts asked if she still agreed with the views she wrote in her book, Harris replied, “Listen, there is no question.”

Instead, Harris commended the “brilliance of [the Black Lives Matter Movement],” for being a “counterforce against a very entrenched status quo around the criminal justice system in America.”

As a woman with a long and meaningful career in law and public office, Harris has excelled within the current status quo of the criminal justice system. Some would even argue that she perpetuated and advanced the status quo, considering the over 1,900 marijuana convictions during Harris’ time as San Francisco district attorney.

Regardless of her past decisions or the current criticism, Harris is receiving in the media, the fact is that the Biden-Harris ticket is running on progressive policies that oppose the death penalty, ban chokeholds and carotid restraints, and hold law enforcement officers accountable.

However, as they move forward in their campaign, it is important for them to assert their current views on police reform without dismissing or ignoring that voters do have grievances with their history.

It is not noble, beneficial nor smart to “cancel” the Harris-Biden ticket, or any other politician that shows a genuine desire to uphold the duties of office with respect and with the general good of the people in mind. Biden and Harris have long paper trails that have served to both establish credibility and make them vulnerable to criticism. This holds true especially in regard to the topic of racial equality in America.

Even individuals as influential as Biden and Harris must accept the realization the rest of the nation has come to over the last several months: dismantling structural racism starts with personal accountability.

For elected officials and the general public alike, personal accountability, learning and unlearning require growth, and it’s natural for that development to make us challenge our past decisions as well as our current convictions.

As an Asian-American myself, I can say that simply existing as a woman of color should not be enough for me to say that I’ve done the work to address racism, and I hold Harris and every other public official to the same standard.

It is the duty of an active and informed constituency to elect politicians that reflect its needs and to hold those politicians accountable when they fall short.

In the same right, it is the duty of those with the honor of serving in office to allow that channel of communication and check on power by supporting our constitutional rights to free speech, media and peaceful assembly.

With a 59% disapproval rating of the current president, it is clear that voters — especially those who lean left — are inclined to support the Biden-Harris ticket this election. However, we will not elect the Biden-Harris ticket on the basis that Biden was the Vice President during the Obama administration and Harris is a woman of color. We will elect them on the basis of their lifelong dedication to the American people, their integrity and actionable policies that address the concerns of the everyday Americans.

If Biden and Harris win in 2020, Harris’s historical milestone of being the first Black and first Asian-American woman would be merely symbolic if she fails to use her identity to resonate with marginalized groups in our country and shift policies to reflect the needs of American voices that have long been unheard.

To take up space in the places she has been is a triumph in itself.

She grew up in the Bay Area at the edge of an era of segregation. Instead of private and elite universities, she was educated at a historically Black college and a public university in California. If elected, she will look more like the American people than any of the vice presidents to sit before her. I can only hope the work she is doing today is blazing a trail for the women who come after her.