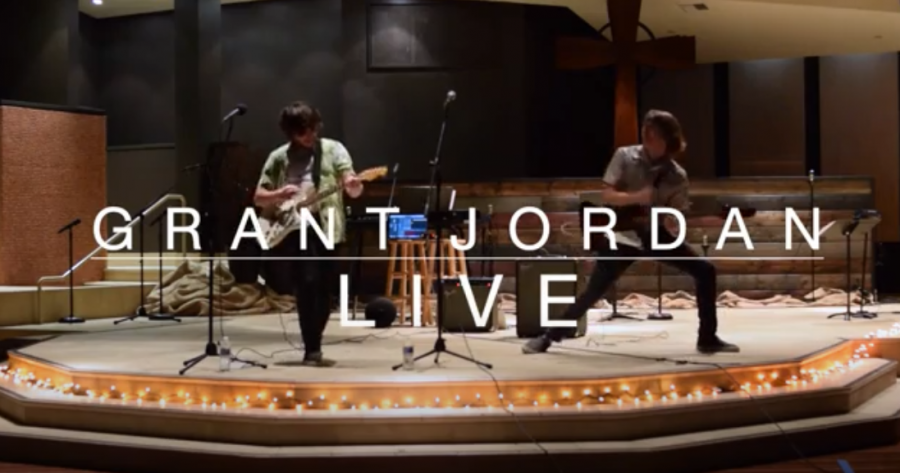 Screenshot from Grant Jordan's prerecorded performance which was suppose to air in the Virtual Nooner series.

Nooner is an event held for up-and-coming student musicians to perform for the SDSU community and is usually held in person at the Aztec Student Union at noon.

However, a disagreement over the contract and criteria for the performance occurred between Jordan and the A.S. officers in charge of planning the event.

Jordan, a political science sophomore, took to his Instagram on Aug. 28 and made a post claiming A.S. was refusing to air his pre-recorded performance due to one of his songs, “postmodern”, and a news clip involving Jordan’s stance on the Black Lives Matter movement.

A.S. initially told him after reviewing his video that they couldn’t accept it for the nooner series because it was edited and their contract requested the video be unedited. Then another A.S. representative said it was because the ABC10 news clip Jordan included in the video violated copyright laws.

“At this point in time, San Diego State is dodging my emails and refusing to cite the specific copyright law that they originally referenced,” Jordan’s Instagram post said. “Most importantly, however, they silenced an effort to give publicity, love and support to the families of Tamir Rice, Breonna Taylor, and so many more.”

Jordan’s petition urging A.S. to air his original performance submission has gotten 267 signatures as of Sept. 14 and a popular SDSU student meme page, @sdsuaztecmemes reposted his petition on their Instagram story.

“Based on this petition, students clearly want to see this performance,” Jordan said. “I’m happy to see other students who are just as passionate about the same issues I am. Is A.S. going to let this performance air if it has Black Lives Matter content in it?”

The clip Jordan is referring to involves a 20-second news clip from ABC10 showing looting in La Mesa followed by rolling text displaying the names of some of the Black Americans murdered due to police brutality.

Jordan and his guitarist then perform Jordan’s new song “postmodern” which he wrote shortly after George Floyd’s death.

A.S. President Christian Holt, who wrote an Op-Ed for The Daily Aztec earlier this summer on his stance on the BLM movement, maintains that A.S. has always been a supporter for student diversity and stands by all SDSU students. Holt said they only denied Jordan’s clip because it doesn’t fit the unedited, live performance style of the nooner series.

Jordan was initially contacted on Aug. 19 by A.S. Assistant Programs Coordinator Natalie Bagaporo through email about his interest in being a student performer for the Virtual Nooner series.

Jordan was asked to have a recorded performance-ready and sent by Aug. 26 so A.S. would have a week to do post-production, according to the emails exchanged.

According to Holt, the only post-production edits A.S. planned to add to the video was the name of the event and text saying it was hosted by A.S. or the Aztec Student Union.

Jordan received the contract on Aug. 25 after he finished recording and editing his performance.

“(Us sending the contract over late)–that would be our fault on our part,” Holt said. “With that, because it was sent over a day before the performance was due, we offered to honor the payment agreement of $200 because of the inconvenience.”

Holt said A.S. would be sure to have the terms of the contract agreed to and understood before future student musicians record their performances.

SDSU later said in a statement through an email that the video wasn’t accepted solely because it broke the contract as it was edited, not because of the content included.

The statement goes on to say how this decision does not limit Jordan from sharing the video on other platforms.

Holt also said he would air Jordan’s original video for another A.S. event that isn’t a part of the Virtual Nooner series.

“A.S. and San Diego State University support every students’ right to freedom of speech and expression,” the statement said. “The university is committed to ensuring the free speech rights of members of our campus community are met.”