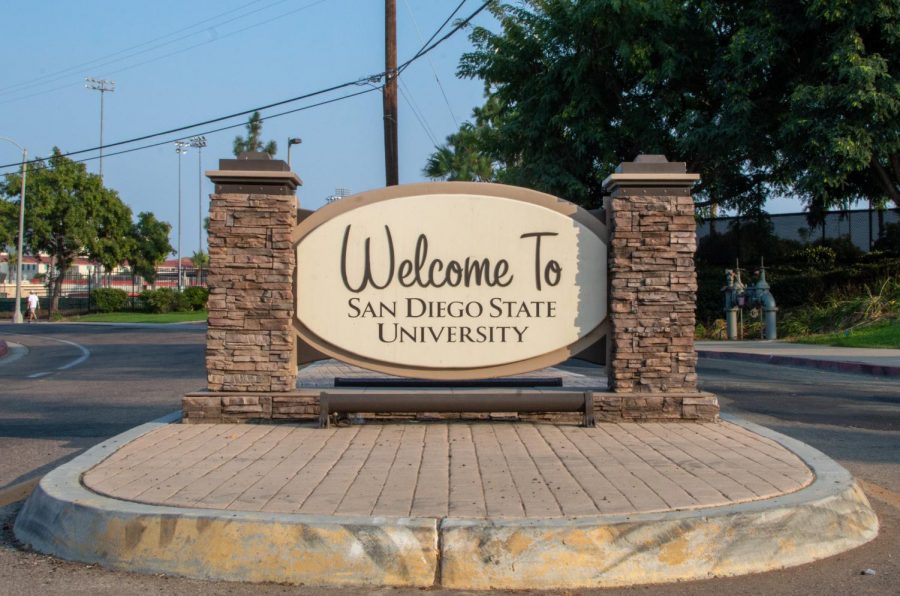 This sign is one of many markers that separates campus from College Area neighborhoods where SDSU students that make up the majority of positive cases associated with the university live.

On Wednesday, San Diego State reported 37 newly confirmed cases of COVID-19 among students and 9 new probable cases. Since Aug. 24 there have been 722 confirmed and probable cases associated with SDSU.

The increase in cases has thrust the university further in the middle of what could become a standoff between San Diego County and California state officials over whether the university’s COVID-19 cases should factor into the county’s overall case rate.

SDSU is bearing the brunt of the blame for San Diego County’s 7.9 case rate – a rate that if maintained for another week will make the county the first in California to regress in the state’s Blueprint for A Safer Economy reopening plan.

If bumped back to tier one, restaurants, churches, movie theaters, museums and gyms in San Diego County will again have to cease indoor operations, a prospect which many business owners have voiced serious concerns over, and the county is working hard to prevent.

To determine the county’s case rate the state used data from the seven-day period starting on Aug. 30 and ending Sept. 5. In that time, SDSU reported 436 positive cases among students. Based on county data, if these cases were excluded San Diego County’s case rate would be calculated at 6.0, safely within the 4.0 to 7.0 range required to remain in tier 2.

In a press conference Tuesday Gov. Newsom said, in no uncertain terms, he would not grant the county’s request.

“You can’t isolate, as if it’s on an island, a campus community that is part of a larger community,” Newsom said. “The answer is no.”

Despite Gov. Newsom’s apparent verdict, San Diego County Board of Supervisors Chairman Greg Cox sent a letter to the governor asking him to reconsider, and the board will meet in a closed session Thursday to discuss the county’s options.

In the letter, Cox wrote that basing the case rate on the SDSU numbers is not representative of the county and will “jeopardize the public’s continued compliance” with public health guidelines.

“The repeated opening and closing of businesses is devastating our local economy, and when we cannot tie our current case numbers to businesses reopening at reduced capacity, we are left to explain to the public an action not based on representative data,” Cox wrote.

Earlier, Cox said the state shares some of the blame by allowing colleges and universities to reopen at reduced capacity in the first place.

“It was the state of California that basically gave the green light to reopen universities, and we don’t think it’s right to have those numbers included with the balance of cases that we’re seeing in this region,” he said.

University officials have maintained that SDSU has taken every measure within its jurisdiction to slow the spread of COVID-19 on campus and in the College Area and that its SDSU Flex plan followed state and county guidance.

A stay at home order was implemented for on-campus residents, a COVID-19 advisory was issued for students living in neighboring communities and SDSU hired a private security firm to patrol the College Area and report any violations of health guidelines and university policies.  Most recently, SDSU announced it would be testing all on-campus residents and conducting a surveillance testing program.

Of the cases reported among SDSU students, 75% represent students living off-campus outside the university’s direct control.

McDonald also said the county is currently investigating 4 community outbreaks linked to SDSU. All are residential and there have been no outbreaks associated with SDSU students at restaurants or businesses.

On-campus, where SDSU has the most control, students are largely following COVID-19 guidance and university officials have taken many opportunities to praise students for doing so.

As of Sept. 15, SDSU reported that 62 students were in isolation housing provided by the university, and 156 were quarantined in their on-campus residences.

According to SDSU all of the cases reported to the university or identified by SDSU have resulted in recoveries, or are students who are currently in isolation and recovering well.