“All In: The Fight for Democracy” sheds light on voter suppression tactics 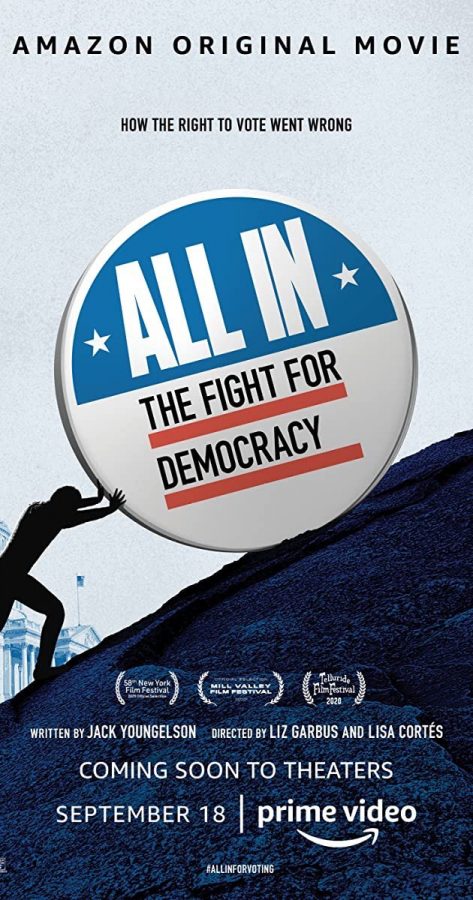 "All In: The Fight for Democracy" highlights the history of voter suppression in America and how voting barriers affect people in different communities.

Amazon Studios’ latest documentary film “All In: The Fight for Democracy,” directed by Lisa Cortes and Liz Garbus, dives into the history of voter suppression and addresses the barriers affecting people today.

The film uses the 2018 Georgia Gubernatorial election between Democrat and former Minority Leader of the Georgia House of Representatives Stacey Abrams, and Republican and former Secretary of State Brian Kemp, as a way to illustrate and expose how the use of voter suppression tactics caused Abrams to lose the election.

As people from certain communities continue to be limited from elections which affect the outcome, as seen with Abrams and the 2018 election, the film analyzes these voter suppression tactics and asks why certain people are restricted from voting.

It then begs the question, ‘does democracy exist in America?’ as America makes it difficult for people to participate in elections.

In a Sept. 24 Amazon Studios’ college roundtable discussion with both directors, Cortes said the 2018 election in Georgia was part of the foundation for the film.

“We always saw the 2018 election in Georgia as part of the spine that would then allow us to explore the historical precedents,” Cortes said.

The historical precedents relate to the first voting conditions or barriers imposed on people, which date back to the Reconstruction Period.

Literacy tests, poll taxes and Grandfather clauses were some of the societally imposed conditions denying people proper access to cast their ballots.

“Liz and I are always amazed at the reconfiguration of the tactics,” Cortes said. “How the tactics are morphing through history, I think, is always part of an interesting examination.”

While the film addresses the various ways certain communities and people are limited in their ability to vote, it also urges people to not be intimidated by these tactics and continue to exercise their voting rights.

Garbus said although some people may feel like voting doesn’t enact any real change, the actions of doing so and electing new officials serve as “building blocks.”

She further explained and said, “Every election is a chance to expand the dialogue to include the needs of folks who haven’t been showing up at the polls.”

Both Cortes and Garbus acknowledged young people have a strong influence on the voting process.

Garbus said power is in numbers, and if younger voters showed up at the polls the same way the oldest voters do, America could see a different kind of government–  reflecting all ages and genders.

“I think our government should be more reflective of our population in terms of age, in terms of race, in terms of gender, and when young folks show up [at the polls] they have the power to make that so,” Garbus said.

Ultimately, voter suppression stems from changing demographics and government officials’ fear of what the larger vote could mean.

Abrams, a strong advocate for voting rights, says in the film the best remedy for voter suppression is voter turnout and making sure those who can vote, do so.

Making sure to plan out how you’re going to turn in your ballot, checking voter registration, voting early and not leaving polling lines until your ballot is cast are ways to ensure your vote will not go unnoticed.

Every single vote matters and with a critical presidential election coming up, “All In: The Fight for Democracy” encourages people to be committed to voting and show up at the polls on Nov. 3 and beyond.

For more information about the film, voting rights, how to register to vote and how to check your voter registration status, visit allinforvoting.com.