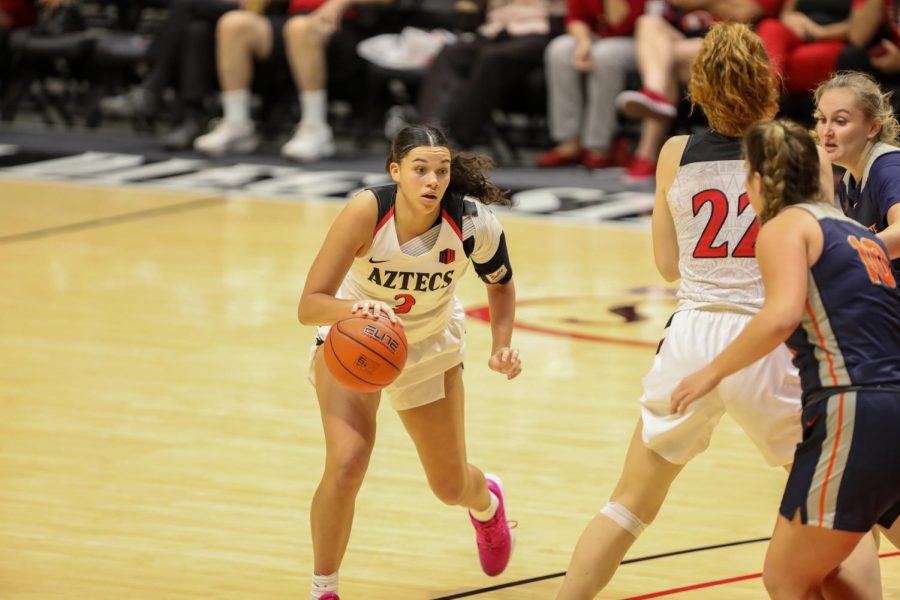 Sophomore guard/forward Mallory Adams dribbles near the top of the key during the Aztecs’ 55-45 win over Cal State Fullerton on Nov. 17, 2019 at Viejas Arena.

After months of uncertainty, the NCAA announced Nov. 25 will be the official start date for the women and men’s basketball 2020-21 season.

San Diego State women’s basketball head coach Stacie Terry-Hutson said she had been hopeful about having a season.

The season will start around the Thanksgiving holiday, when most college campuses will be at a low capacity.

“What I like about the Nov. 25 start date, I like the thought process of starting to play those games when we have less students on campus only because the (COVID-19) transmission rate gets lower,” Terry-Hutson said.

Junior guard Jayden Perez said she was both excited and surprised to hear about the start date.

“I think we are all just super excited that we have a date to look forward to now and something to move forward to instead of being out in limbo, so it was super exciting,” Perez said.

The NCAA announced the season will be played with a reduced number of games. Each team will play a minimum of 13 games and have a maximum limit of 27 games.

Perez said the team will have to make the most out of the circumstances.

Terry-Huston said she was not bothered by the limited number of games and the main priority is the health and safety of the team.

“I don’t mind the reduction of games because I think it is for the betterment of our student-athletes,” Terry-Hutson said.

Redshirt junior forward Mallory Adams said she was frustrated by the limited number of games, but she will approach the season “one game at a time” and is excited to be back on the court.

“It’s upsetting just because, of course, you want to have the most opportunities to play,” Adams said. “But I think the strategy for the most part stays the same because we don’t really need to get ahead of ourselves. When we do that we aren’t as successful.”

During the 2019-20 basketball season, Adams only appeared in six games before suffering an ACL tear and was out for the remainder of the year.

Adams said she is recovering well from her knee surgery and is nearing the end of her physical therapy.

“I think we’re getting closer to the end of all the physical therapy,” Adams said. “Thank goodness, I’m sick of it. I’m ready to play some basketball.”

The official start date for full practices is Oct. 14, but until then, the team is allowed 12 hours of practice time a week.

“Now that (the practice start dates are) being said we are working with a different set of rules obviously with the virus,” Terry-Hutson said. “So just making sure we are bringing our kids back in a timeline that’s obviously helpful for us to compete at the highest level, but most importantly, to make sure our student athletes are safe.”

With the summer lost and fall just beginning, the team has missed out a lot of pre-season training. Terry-Hutson, however, said the team will have plenty of time to prepare for competition.

“For the most part, we are just going to go back to the old school way of doing things,” Terry-Hutson said. “Back when I played many, many years ago, we started practice on Oct. 16 — there was no spring, summer, fall workouts.”

Amidst the twists and turns of the global pandemic, Terry-Hutson said she is proud of her team’s resilience.

“What I do know and what I’m most proud of our student athletes is they’ve been so flexible with not only the pandemic hitting, and then going online within a day and then managing staying healthy— both mentally and physically— during this time,” Terry Hutson said. “So I’ve been really really proud of how flexible and adaptive they’ve been to everything we’ve thrown at them.”

Adams said she and her teammates are looking forward to building chemistry on the court, and are eager to compete together this season.

“We are excited to get on the court together because that is obviously where chemistry is best built,” Adams said.