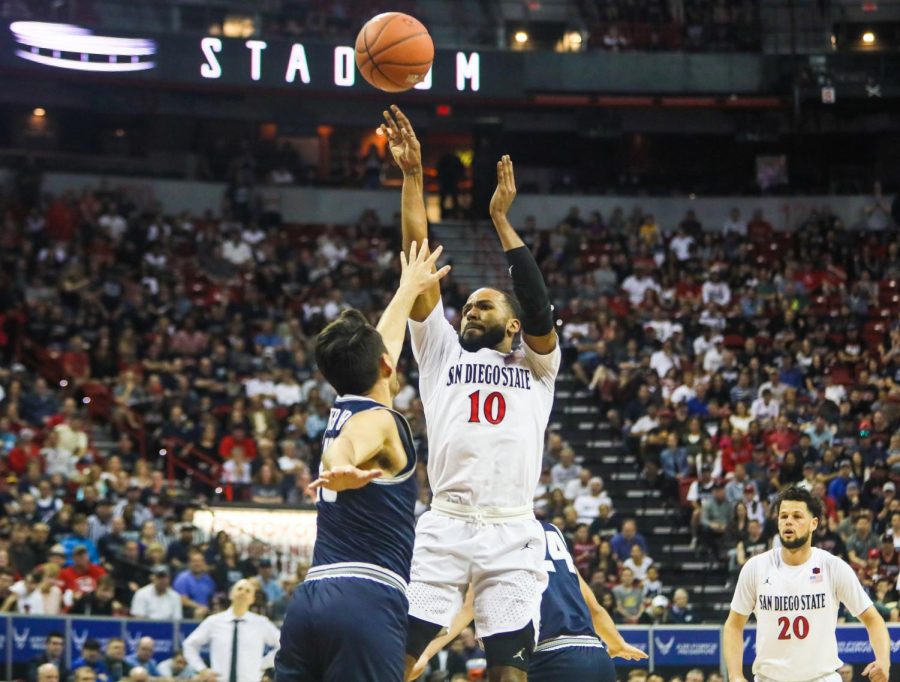 Then-senior guard KJ Feagin attempts a shot during the Aztecs’ 59-56 loss against Utah State at the Thomas and Mack Center on March 7.

After the 2020 NCAA Tournament was canceled due to the COVID-19 pandemic, Feagin’s time on The Mesa was done after one season as a graduate transfer. He had to look ahead to his future career.

In a live Q&A chat from The Athletic on April 3, the 6-foot-1 guard said he was open to playing basketball professionally, but was in no rush to make any decisions.

“I have talked to a couple of agents but I’m not in a rush to commit or make any permanent decisions,” Feagin told The Athletic.

Now, he is committed to playing basketball in Germany.

Feagin is expected to sign with Reisen Ludwigsburg, according to international basketball news site Sportando. He joins a team that made it to the finals in one of Germany’s top divisions, the Basketball Bundesliga (BBL), last spring.

One of the tuffest goodbyes I’ve ever had to do…Moms said it’s time to fly on my own now. If I fall they there to catch me. Here’s to the start of a new journey!

The Long Beach, California native enters another chapter in his basketball career after closing a special one on the Mesa. During his lone senior season with Aztecs, Feagin started all 32 games, averaging 9.1 points per game with three assists and 3.3 rebounds.

As he heads to Europe, Feagin won’t be alone in his journey. In fact, he’ll even get the chance to play with one of his college teammates.

With Feagin and Wetzell on this same team, the two former Aztecs will be able to play together professionally for the first time. They both came to SDSU as grad transfers, and now are taking the same step to the pros.

Feagin’s decision was met with nothing but praise from his former teammates.

Goodluck out there 10 I’ll be watching closely 🙏🏼 https://t.co/2WAEW6ijtq

Feagin is set to play for Riesen Ludwigsburg this upcoming BBL season, starting this November and ending in June.