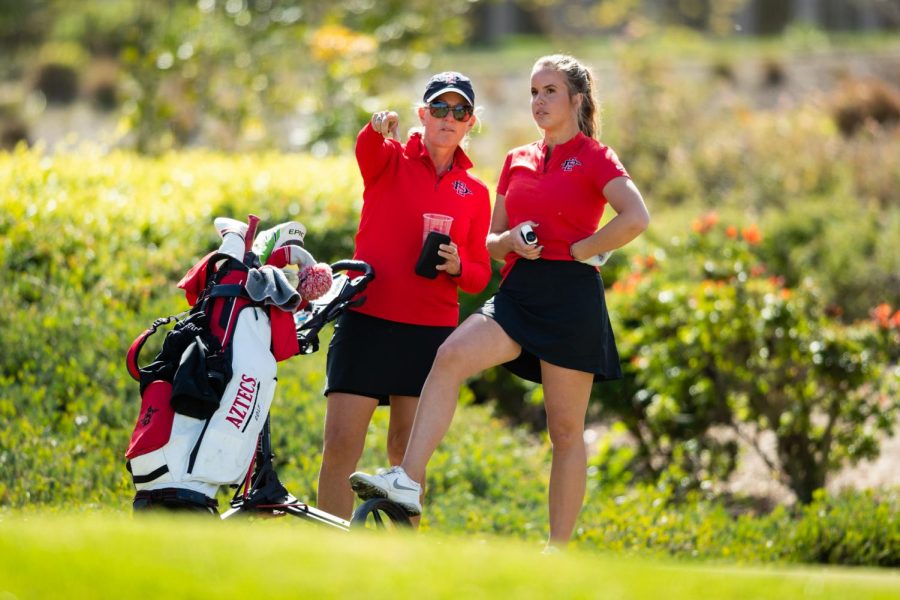 San Diego State women’s golf continues to be the reigning Mountain West Conference Champions since they did not have the chance to defend the crown back in April.

Normally, the Aztecs would be competing this fall, but due to the coronavirus pandemic, the Mountain West Conference canceled all fall competition on Aug. 5.

The season cancellation makes the situation even more difficult because they have a diverse team with a handful of players from different countries outside North America.

The Daily Aztec caught up with head coach Leslie Spalding to see how her players are doing around the world and what it is like to have international talent in the program.

The Daily Aztec: How are you and the program doing right now?

Leslie Spalding: “I’m doing well. The program is crawling at a snail’s pace right now but we’ve had two practices and we have three that are opting out because the restrictions don’t fit. It’s very restrictive in terms of how we can practice so I’m supportive of my athletes and what they need to do.”

DA: Do you think you can have a season with both the PGA and the LPGA playing for a few months now?

LS: “Not in California, I don’t. Yeah, it might be possible right now, but I’m hoping in the spring, we can. With our restrictions right now in California, I think it is very difficult. Right now we’re in phase one of our plan and we’re allowed to play nine holes but not 18. I am hopeful for the future we can get through and into different phases rather than the one we are in and we can go forward where we can actually get out of this.”

DA: What does it mean to the women’s golf game at the college level, including your program that recruiting does not just take nationally, but internationally?

LS: “It’s really interesting because in recruiting, we talk to players from all over the world in different countries and we’ve had a great experience in the spring of talking to players and learning how every country is handling (the pandemic). We’re such an international team. (Junior Sara Kjellker) from Sweden, they had no restrictions and she had quarantined for two days and said ‘I’m done with this’ and she practiced all the time and they lived life as if it is normal. Then we have the Phillipines, who closed their borders immediately and (sophomore Bernice Olivarez Ilas) was not allowed out of her for two months, maybe more. They were very restricted in terms of movement because they were worried about getting the virus because they don’t have the infrastructure to handle it. Coming back this fall, having a Swedish person come back to restrictions, quarantines and all that, I understand her point of view, but at the same time, she has not been here so it’s very difficult for her to accept.”

DA: What is the chemistry like for the team to mix in players from all over the world rather than just have players from the U.S.?

LS: “I think I would like to have an American team and I think in our future we will have a lot more California players which I’m looking forward to. But having that international scope really shows what other countries in the world are doing for their sports programs. I have an Australian, who are leaders in sports science and I have Sweden and Switzerland, where they have national teams and they travel them all year where they don’t have to pay out of pocket for expenses. Then, for Americans, it’s all up to the families to provide for that stuff. In terms of chemistry, it’s an interesting dynamic because it’s friends for a lifetime where they learn from each other and I love the diversity I’ve had on this team for the past nine years. I think it is really cool for our student-athletes to experience.”

DA: How much more time do you have for recruiting since no competitions are not being held?

LS: “We completed 2022 in July and we can’t do 2023 and we can’t go watch. I have plenty of time, but there’s really not much I can do. I don’t really know the 2023 class and the only way I can know that is by going out and watching and I can’t communicate with them, so not doing a lot of recruiting right now. But we have our commitments for 2021 and 2022.”

DA: Looking back, in four of the last five seasons (2015-2019), you have had a conference championship in either individual or team competition. How does that speak to the success of the program?

LS: “There are so many great athletes out there and it’s finding the right ones that can help you grow a program and help build on that success. It’s hard if you’re unsuccessful, to all of a sudden get a really good player. But when you get a really good team and you get known for having a good team, people want to be a part of it and I think that has been the really fun part of it. Being in the best city in America with the best climate in America along with our home course (The Farms) is fantastic. We’re a very desirable place to be and I love that. It means we can be a little picky in who we are going after and what we’re looking for. We have definitely defined that and I think the future looks really good in terms of players who are passionate about the sport, who have huge desires to achieve big goals and that is what you really want – someone with heart that wants to succeed and be a proud Aztec. I believe our future is a group of proud Aztecs. Right now, we have a player that is No. 73 in the World Amateur Golf Rankings in Kjellker and is somebody who is out there practicing 16 hours a day and she has huge goals and huge dreams, but she is also extremely passionate and motivated, so it is going to be really fun to get back to some sense of normalcy and hopefully have a successful spring season.”

DA: How have you and the team been keeping in contact with all of the different times?

LS: “The only time of day that it works for us is 3 p.m., which is 6 a.m. in the Philippines and 11 p.m. in Sweden. It was very difficult to have a team meeting and we didn’t have that many because it was so difficult. I am keeping in contact with the players individually. We have a player who is in Germany, the Philippines and Australia. They’re living their life as they normally would and they’re in a much better place than being here because they are able to work out, practice, do everything without restrictions. Communicating is a little tricky when you try to get a world on the dang schedule. It is very interesting.