Conference play will begin Dec. 29 and continue through March 10-13, concluding with the conference tournament. 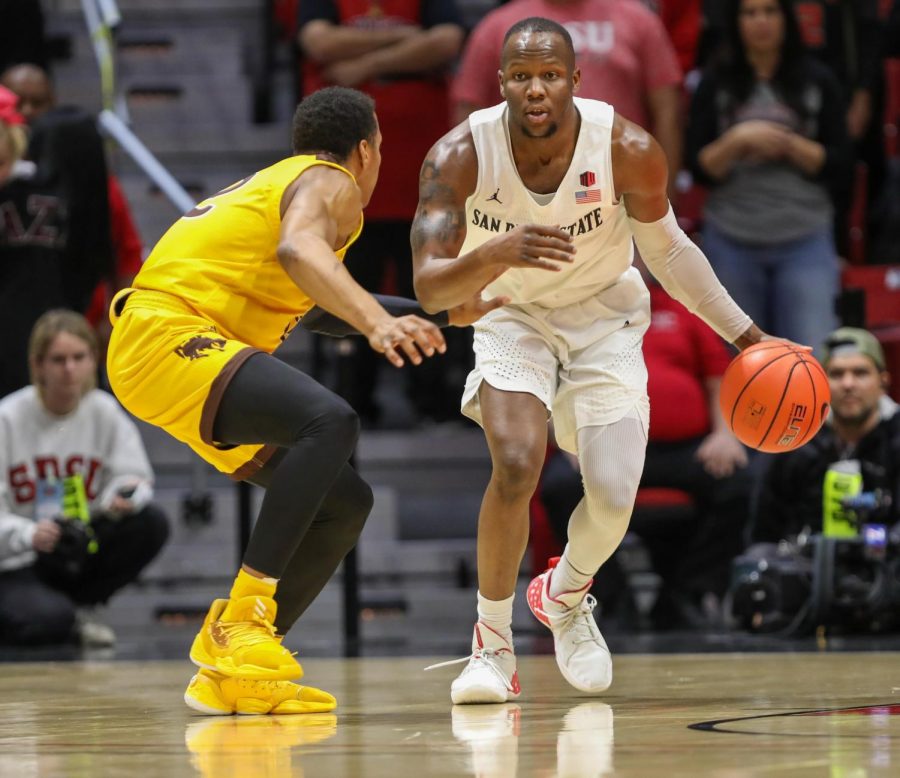 Then-sophomore guard Adam Seiko looks to dribble past a Wyoming defender during the Aztecs' 72-55 win over the Cowboys on Jan. 21 at Viejas Arena.

The Mountain West Conference announced a tentative 18-game schedule for 11 men’s basketball programs, including San Diego State men’s basketball, according to a press release on Oct. 9.

The initial schedule’s format is how it was in the past in terms of conference play: 18 total conference games with 16 scheduled to be a part of home-and-home series.

Wyoming and Colorado State will be the only conference team the Aztecs play once. SDSU will take on the Cowboys on the road on Jan. 12 and will host the Rams on Feb. 13.

The Scarlet and Black is set to open conference play at home against the Lobos on Dec. 29. The last time the two teams played was Feb. 11, when the Aztecs lifted the outright regular season conference trophy with four games remaining after defeating the Lobos 82-59.

SDSU will end its regular season in Reno against Nevada on March 6.

Conference competition will wrap up shortly after on March 10-13 for the Mountain West Tournament at the Thomas & Mack Center in Las Vegas.

January 20 and March 2 are the only two bye dates on SDSU’s schedule, but that does not leave enough time for make-up games to be played in case COVID-19 cases are confirmed among student-athletes or staff.

Some games nationally broadcasted on CBS Sports and Fox Sports will be changed from Tuesday to Saturday for TV reasons. Those changes are expected to be made in the coming weeks.

The Aztecs now wait for their schedule to be completed with non-conference opponents. Those games are scheduled to begin Nov. 25, the official start date for the 2020-21 men’s basketball season.

SDSU is looking to improve upon a 30-2 record the team achieved last season, including a 17-1 record in conference play and automatic berth to the NCAA Tournament.