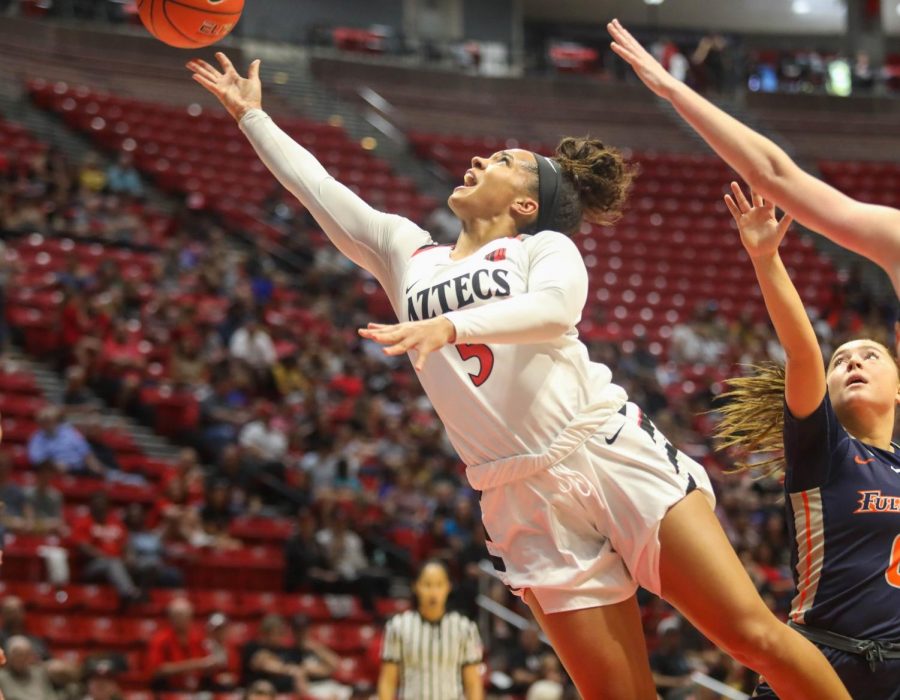 Then-sophomore guard Téa Adams drives to the hoop for a contested layup during the Aztecs' 55-45 win over Cal State Fullerton on Nov. 17, 2019 at Viejas Arena.

San Diego State begins the conference slate with four of their first five games at Viejas Arena, beginning with Air Force on New Year’s Eve. The lone road matchup is against San José State on Jan. 6.

Following the home game against Nevada on Jan. 13, the team will hit the road and travel to Albuquerque, New Mexico and Colorado Springs, Colo., respectively, to face the New Mexico Lobos on Jan. 16 and Air Force Falcons on Jan. 18.

The Aztecs will end the first month of the new year by taking a short trip to Las Vegas to take on the UNLV Rebels on Jan. 30.

The month of February begins with a difficult stretch with a home game against Fresno State on Feb. 3, followed by three consecutive road matches against the Nevada Wolf Pack on Feb. 6, Colorado State on Feb. 11 and Wyoming two days later.

Because of the two bye spots in conference play, the Aztecs will not play Boise State at home nor will they travel to Logan, Utah to face Utah State. SDSU goes to Boise on Feb. 24 and the Aggies come to San Diego a week prior on Feb. 17.

Senior Night is scheduled for Feb. 27 against San José State followed by their final game of the regular season on March 2 at Fresno State.

The Aztecs will look to improve off their early exit from the MWC Tournament this year when the team lost in overtime to Utah State in heartbreaking fashion in March.