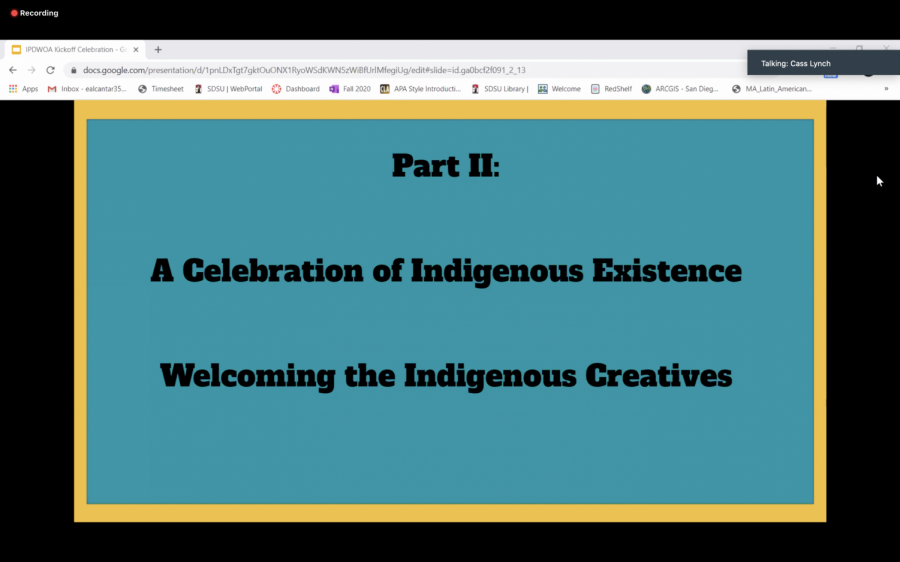 The Indigenous People's Day Kickoff Celebration was held as part of the Native Resource Center's "Week of Action" from Oct. 12-16.

For Monday’s event, American Indian Studies professor Cassady Lynch spoke on recognizing and giving back to the Indigenous community, anti-racism, and inclusivity. Along with Lynch’s lecture, a visual art show offered students the chance to perform poetry and showcase their art pieces.

Prior to the event, NRC Director Chris Medellin said the center’s virtual lounge hours still offer students the chance to socialize and ask questions, ensuring students are accommodated no matter where they’re living.

Medellin wants to forge the connection they’d usually have in-person and make sure first-year students feel like they’re not far from campus, which is why these events are so crucial.

In their presentation, Lynch explained the importance of an intersectional education filled with many perspectives speaking on social issues to avoid a white-dominated narrative. Since the idea of Native conquest is constantly reinforced in American education and culture, and Natives are often viewed as relics of the past versus living, breathing people, it’s done to help students feel comfortable.

“The challenge for any educator who is working with Indigenous populations is trying to figure out how to counter a lifetime’s worth of this constant barrage of anti-indigeneity that exists in the United States,” Lynch said.

Much of Lynch’s talk focused on the concepts of survivance and rhetorical sovereignty, which they believe should become normal building blocks of the American education system.

Survivance is focused on listening to Indigenous stories to carry on cultural traditions and determine if society is balancing historical representations with current representations to measure progress. While the idea of rhetorical sovereignty is to remind instructors that students represent separate nations of distinct cultures and these cultures should not be pitted against each other, by instead using “culturally responsive teaching.”

With these methods of instruction, students of all backgrounds would be accepted into a more inclusive environment where sticking to rigid traditions isn’t strictly enforced.

To Lynch, the problem with most archetypal representations of Native Americans is that they are often frozen in time.

To demonstrate an example of this, Lynch showed a clip from a “Family Guy” episode where the characters perpetuated common Native American stereotypes and reinforced dangerous ideas about white saviors and the white gaze. When the scene finished, Lynch asked a simple but significant question.

“What exactly is funny here, what are we meant to laugh at?” Lynch said.

This brief visual proved how rampant these harmful ideas are which paired perfectly with Lynch’s topic of proper representation.

To wrap up the event, a few students shared their poetry, drawings, and artistic passions. This included heartfelt poems inspired by real-life struggles, a detailed sketch of Cookie Monster with an inspirational quote, and a student explaining their blossoming new print business.

Medellin said he hoped people would leave the event with some tangible items they can accomplish such as donating to a certain cause, sharing educational information given during the session, or whatever else is connected to the day’s theme.

“The goal of each event that we have this week will be to make sure everyone knows something they can do,” Medellin said.

During the event, it was mentioned that the SDSU’s University Senate recently passed a resolution stating the university will mandate all course syllabi to include the official SDSU Land Acknowledgement statement.

Noting that SDSU resides on Kumeyaay land, Medellin stressed the importance of leading tough conversations centered on SDSU’s controversial past decisions such as employing mission-style architecture and the infamous Aztec mascot.

Also, with Native American students making up less than 1% of the campus population and a small portion of the faculty staff, it’s important for the university to promote spaces for the Native population on top of the recent land acknowledgment.

The next event in the Indigenous Peoples’ Day Week of Action will be the Community Check-in on Tuesday, Oct. 14 from 4 to 5:15 p.m. over Zoom.