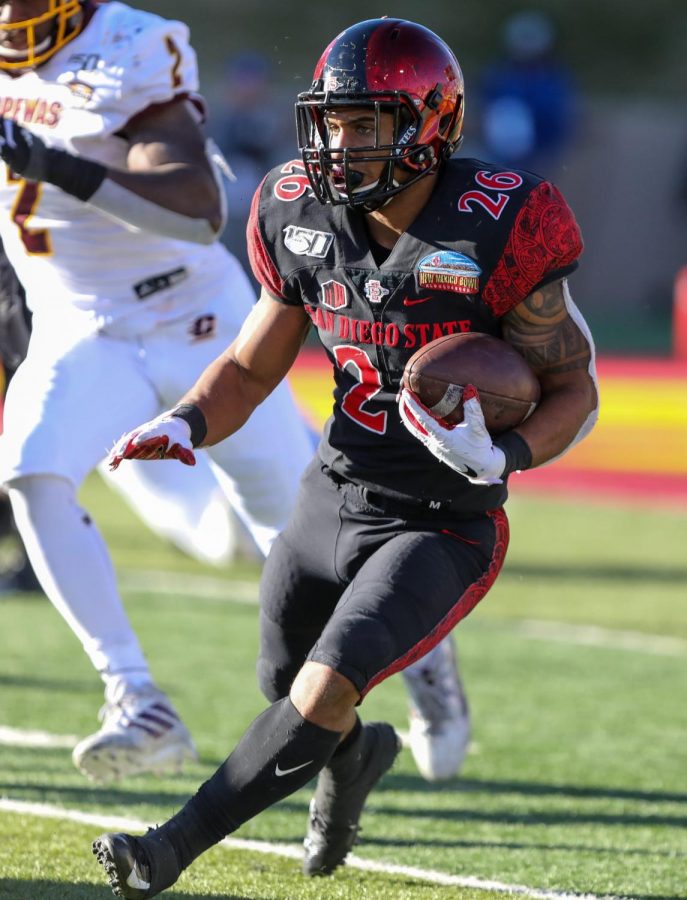 Then-sophomore running back Kaegun Williams carries the ball during the Aztecs' 48-11 win over Central Michigan on Dec. 21, 2019 at the New Mexico Bowl in Albuquerque, New Mexico.

Jeff Hecklinski, who has over 20 years of collegiate coaching experience — including being part of head coach Brady Hoke’s first SDSU staff during the 2009-10 seasons — returns to coach SDSU’s offense and the quarterbacks.

The benefit of having RPO plays is the difference of a pass catcher getting a touchdown or the ball not being caught. By faking the handoff to the running back, it catches the defense off guard and that time to recover goes to the advantage of the offense. In terms of the ground game, RPOs also have the same influence but rather pose the threat of the pass.

Baker, who went to local Helix High School, has one collegiate start under his belt. That was in the final regular season game last year when the Aztecs beat BYU 13-3 at SDCCU Stadium. Baker completed 19 passes on 24 attempts for 172 yards and a touchdown.

The native San Diegan said his goal in his second year is to control the offense and put his teammates in favorable situations.

“I’m just going to be a distributor this year and really get the ball in our playmakers’ hands,” Baker said. “They can make plays in space. Think I’m an accurate quarterback, so we’ll see what happens.”

Behind Baker on the depth is junior quarterback Lucas Johnson, who transferred from Georgia Tech earlier this year.

Hoke said having both playcallers gives the team strength and depth to play in situations that could fit best for Baker or Johnson.

“Having the opportunity to have both of them, there’s no doubt that there’s a package that would be for Lucas and a package within the game plan for Carson,” Hoke said.

Following Baker and Johnson on the depth chart are junior quarterbacks Jordan Brookshire and Mark Salazar. Brookshire was the only backup to make an appearance behind center last season.

Baker said the quarterback room gave him competition for the starting spot because of their diligence.

“I mean, our quarterback room is a great group of guys,” Baker said. “A lot of great quarterbacks, guys that competed hard. We all competed hard for the spot. We all worked our butts off. So hats off to those guys. And we have a really great room.”

Aztec fans were even able to catch a sneak peek of Baker leading the offense in a video showing SDSU participating in a closed scrimmage on Oct. 10 at Dignity Health Sports Park in Carson, Calif.

On the outsides, juniors Kobe Smith, Ethan Dedeaux and Isaiah Richardson along with sophomore Jesse Matthews are the top receivers to catch Baker’s passes.

With a new offense in place, Hoke said they will need to rely on experience and be able to put players in opportunities to be successful on the field.

“We’ve still got to clean things up all the time,” Hoke said. “But a new offense, we’ve got to get through some of the things with that. And as coordinators on both sides, it’s not what we know, but it’s what they know and where we can play physical and fast.”

Physicality and speed will also be crucial in the trenches, as the Aztecs look for leadership from senior offensive tackles Kyle Spalding and Zach Thomas.

Hoke said the offensive line has come into extended fall camp with motivation from Spalding and Thomas along with senior center Dominic Gudino.

“I think they’re playing very, I would say inspired,” Hoke said. “I like the leadership that Kyle Spalding and Zach have come and given to us every day. I know Dom being there everyday, I think it’s all been very good for us.”

Establishing the run is crucial through the play of the offensive line. Entering fall camp, the Aztecs had multiple running backs vying for the starting job.

Senior running back Chase Jasmin has been with the team the longest, but senior Greg Bell, a local product, is also set to make his SDSU debut after transferring from Nebraska last year.

As a Cornhusker, Bell carried the ball 35 times for 173 yards in four games.

“He’s kind of an unknown coming in to us a little bit,” Hoke said of Bell. “But he’s had a really good fall, and he’s a guy that can make you miss and run over you at the same time.”

Besides Jasmin and Bell, juniors Chance Bell, Kaegun Williams and Jordan Byrd look to get the majority of touches.

Hoke said playing time at the running back position could be based on a committee depending on the game situation.

“They all have strengths and weaknesses, and it’s our job to make sure we have the right guy in the play at the right time,” Hoke said. “Whether it’s Byrd and getting the ball to him on the perimeter, whether it’s Chance or Kaegun being more physical with it. Jasmin, he has a tremendous ability to make a guy miss in the hole.”

Byrd and Chance Bell are listed as the top two backs in the week one depth chart, but Williams and Jasmin are right behind them. Don’t be surprised if Byrd also occasionally lines up in the slot or out wide due to his speed and versatility.

With up to six running backs potentially rotating in, that could also take some pressure off of Baker as he gets accustomed to being the centerpiece of the offense.