In accordance with NCAA, SDSU gets Election Day off to encourage student-athletes to vote 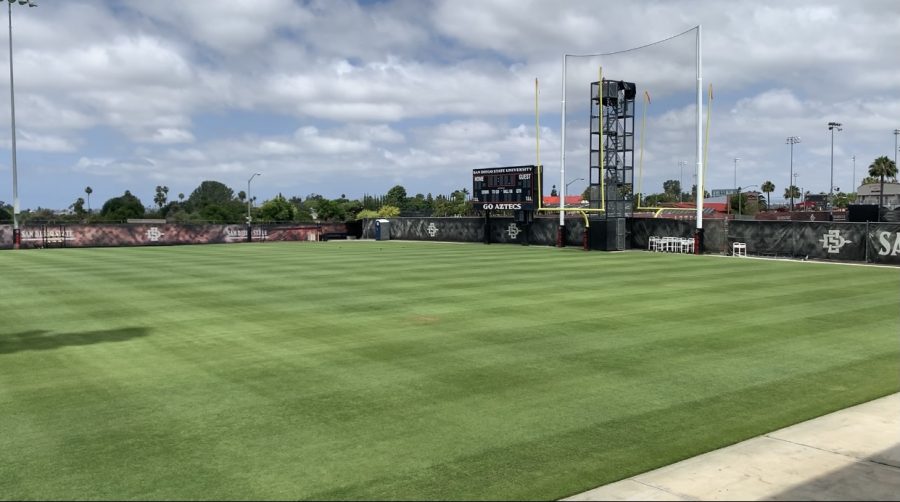 The San Diego State football practice field next to the SDSU Sports Deck was empty on June 7 due to the COVID-19 pandemic. Although football is back, the practice field will be empty yet again on Nov. 3 as student-athletes are encouraged by the NCAA and SDSU to exercise their right to vote.

In June, the NCAA announced the first Tuesday in November will be a day off so athletes can vote in the upcoming election.

As a result, San Diego State athletic fields, gymnasiums and practice facilities will be closed on Nov. 3.

Since the NCAA’s announcement to encourage voting, SDSU Athletics has been pushing all of its teams to go out and vote on Election Day.

Aztec women’s volleyball Head Coach Brent Hilliard said he appreciates the NCAA’s decision because it gives the athletes the opportunity to exercise their civic duty and spread the word.

“I like it,” Hilliard said. “That’s one area that is non-controversial. There are so many areas that are sensitive right now and it’s hard to take a side as far as what your true beliefs are. When it comes to voting, that’s the easiest one that the (NCAA) has given us. These girls have been asked to let their voices be heard.”

On Oct. 19, the volleyball team announced via Twitter every athlete is registered to vote.

Volleyball sophomore outside hitter Nya Blair said it is important for everyone to vote and said it is gratifying for the NCAA to encourage others to exercise their responsibility as a citizen.

“At the end of the day, it is our civil duty to vote,” Blair said. “Sometimes we get so busy and wrapped up in our schedules that we forget to do simple things such as register to vote. I think it is a great thing that they’re doing it and I feel that it was needed because now there is more influence civil wise. It helps us pertain to our duty as a civilian.”

Football senior left tackle Kyle Spalding said it is valuable for all of his teammates to vote in the November election despite being in the middle of the season.

“That’s been a big process these last couple of weeks, we’ve been working with every student, making sure that they can find the time to register to vote,” Spalding said in a press conference. “It’s very important to pause things on election day to give people the time they need to vote, especially with everything going on today. It’s been a big deal and it’s very important for us.”

Head Coach Brady Hoke said Election Day changes the practice schedule by two days from a regular week, but he recognizes the importance.

“It’s kind of funny because we get back from Utah State, and that will probably be at night, obviously, probably early Sunday morning,” Hoke said in a press conference. “Then we play on a Friday. So on (Nov. 3), obviously it’s important for our guys to get out and vote, and we believe in that. So it’ll be a short week, but it’s worth it and we’ll be in good shape.”

For the first time in seven months, men’s basketball practiced at full speed. It is another program that will miss next Tuesday’s practice in order for players to exercise their right to vote.

SDSU women’s soccer has been doing team workouts five days a week despite the cancellation of their fall season. With this day off, they will be missing workouts to send in their ballots.

“Our coach initially was like, ‘We need to make sure we’re all registered to vote,’” she said. “I was pretty surprised he did that, but I was also like, ‘Wow, that’s really awesome.’”

With the entire team now registered to vote, Girman has pushed her teammates to not only get registered but to vote and do it early.

“I’m very vocal about exercising voting rights, and I have other teammates that are very vocal too,” she said. “We all came together and got registered to vote pretty early because we all realized that we need to.”

She wants student-athletes not just on-campus, but all across the country to use this opportunity to make their voices heard.

“I’m really grateful that the NCAA gave us this opportunity, and I hope all the student-athletes across the whole country take advantage of that and vote because it’s a serious one,” Girman said.

Update: 463 student-athletes, including the entirety of 18 of the 19 SDSU athletic teams, have registered to vote, which is 99.6% of the eligible athletes.