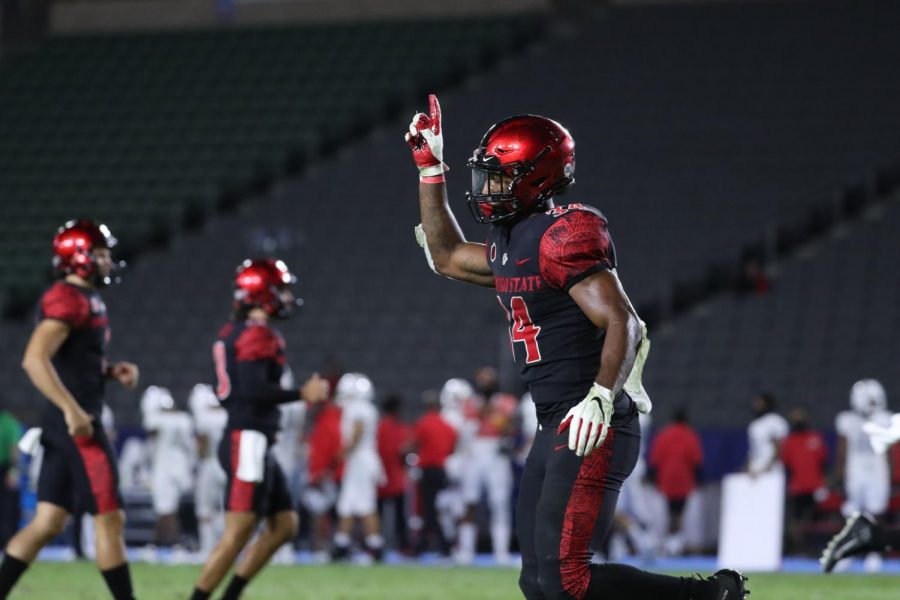 Senior running back Greg Bell points his finger to the sky after scoring a touchdown during the Aztecs' 34-6 win over UNLV on Oct. 24 at Dignity Health Sports Park in Carson, Calif. Bell finished the game with 111 rushing yards and a touchdown.

In San Diego State’s 34-6 victory against UNLV on Saturday night, one thing was made very clear: the offense is not messing around.

The team’s season opener debuted a new offensive scheme under new offensive coordinator Jeff Hecklinski. The plan was to get more creative in the way the team runs the ball. With four strong, savvy running backs, the Aztecs were able to bring the momentum they were hoping for.

“I think the guys did a great job preparing,” head coach Brady Hoke said. “I thought we came out there with a lot of energy. I think they were excited to go out and play. We were playing as a team.”

The strength of the Aztecs’ ground game allowed them to start the game by making a statement. The Aztecs second possession of the night went like this: Senior running back Greg Bell rushes for 10 yards, junior running back Jordan Byrd runs for 32 yards, Bell runs the ball successfully a few more times to get to UNLV’s 4 yard line and sophomore quarterback Carson Baker passes to junior wide receiver Ethan Dedeaux for the Aztecs’ first touchdown. In the first half alone, the Aztecs put 27 points on the board.

The Aztecs’ offense has scored 34-plus points for the second straight game in a row. In last season’s New Mexico Bowl against Central Michigan, the Aztecs scored a season-high 48 points.

This past weekend, the Scarlet and Black put up a total of 434 yards and rushed for 287.  Baker threw for 137 yards and one touchdown.

In previous seasons, the Aztecs’ weapons have been versatile running backs like Rashaad Penny and Donnel Pumphrey. Penny led college football in rushing yards during the 2017 season with 2,248 yards. He has gone on to prove his value in the NFL with the Seattle Seahawks despite injury troubles. Pumphrey holds the status as the all-time NCAA Division 1 FBS leading rusher during the regular season with 6,405 yards throughout his four-year college career.

After a promising game one, it seems as if the Aztecs are on track to have this season’s strength circulate around the ground game.

“It felt good to have four or five running backs out there, all contributing and doing good,” senior running back Greg Bell said in the postgame press conference. “It took the load off everybody and everybody contributed well and it worked out good tonight.”

Greg Bell was the breakout star of Saturday night’s game ending the night with 19 carries for 111 yards with one touchdown.

“I was just going out there trying to run the hardest I can,” he said. “My (offensive) line opened up a lot of holes for me, the coaches called very good plays and everything worked out well.”

Greg Bell became the Aztecs’ 80th different 100-yard rusher in program history. This was Bell’s second career 100-yard game but his first as an Aztec. The last time Bell had a 100-yard game was on Sept. 8, 2018 playing for Nebraska.

This past weekend, Bell made his first career start as an Aztec after not having played a football game since 2018.

Bell transferred to SDSU after playing four games with the Cornhuskers during the 2018 season. He sat out last season with the Aztecs after an eye injury caused him to miss the 2019 season.

Despite time spent away from the football field, Hoke said he knew Bell would step up to the plate after showing promising traits during the team’s unconventional fall camp.

“It’s been 25 months since Greg has played so I know how excited he was to get out there,” Hoke said. “He had shown us some things during fall camp, if you want to call it. (He showed) that he was going to be one of the guys that we wanted to get the ball to.”

Playing football for the first time in two years was an opportunity for Bell to prove himself. And indeed he did. Bell was a key component in helping the Aztecs’ running game emerge.

Moving forward this season, Aztec fans should expect to see the offense continue to make big plays and put numbers on the scoreboard that haven’t been seen since 2017.

In the week leading up to the season opener, Chance Bell expressed that the team is confident they will be scoring a lot of points this season.