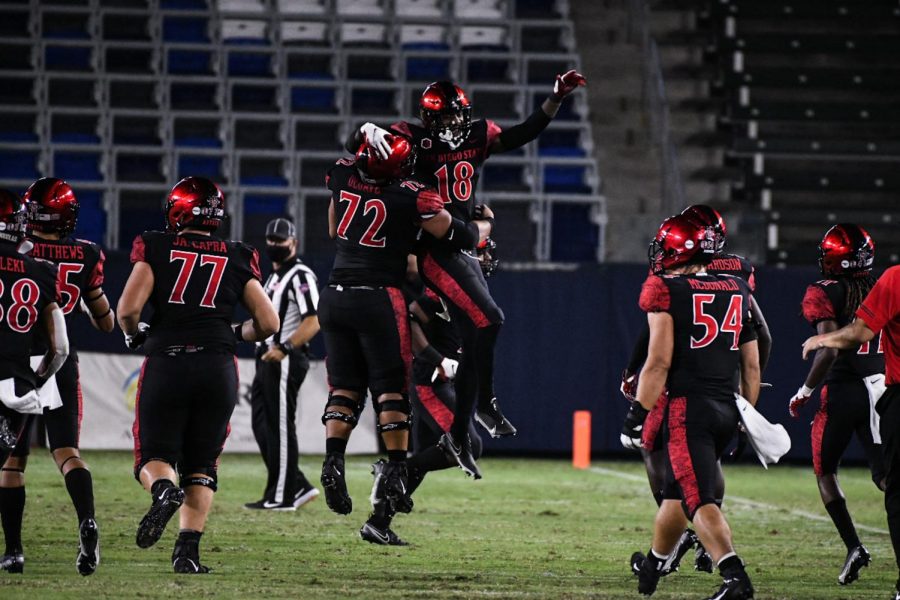 Senior safety Trenton Thompson (#18) celebrates with his teammates after blocking a punt during the Aztecs' 34-6 win over UNLV on Oct. 24 at Dignity Health Sports Park in Carson, Calif.

Last week, San Diego State football was distraught they gave up six points and 186 yards in the victory over UNLV last Saturday at Dignity Health Sports Park in Carson, California.

It was the fewest points allowed in a conference game since 2016 when SDSU shut out Hawaii 52-0.

The team’s goal is to give up no points and no yards.

First-year defensive coordinator Kurt Mattix said having the mentality to shut out its opponents weekly is due to the foundation of a strong defense dating back to head coach Brady Hoke’s first go-around at the helm.

“That’s the one credit to coach Hoke 10 years ago and then coach (Rocky) Long creating a culture of expectation on defense,” Mattix said in a press conference Monday. “That’s what we’re trying to do each and every day we get an opportunity to take the field representing San Diego State. The defense, itself, has a standard.”

This is coming from a defense that gave up 12 points a game, which ranked fourth-best in the country last year behind Clemson, Georgia and Ohio State, respectively.

The Aztecs lost two starters, including linebacker Kyahva Tezino, who had 3.5 sacks and 99 tackles a year ago.

Taking Tezino’s place on the field in 2020 is junior linebacker Caden McDonald and already one week into the shortened season, McDonald received Mountain West Conference Defensive Player of the Week honors.

The 6-foot-3 linebacker had 2.5 sacks and eight tackles against UNLV on Oct. 24 en route to receiving the weekly award.

McDonald said the honor is because of what his teammates were able to do.

“Overall, it is a team thing,” McDonald said. “I can’t do anything without the (defensive) line doing their job, the safeties holding it down on their spot and the other linebackers doing their thing. I’m blessed just to get the opportunity to make the plays that I got to make.”

Hoke said no matter what time of year it is, McDonald is getting better both on and off the field.

“Caden is one of those guys who works his tail off,” Hoke said. “He loves the game. He loves to get better every day, whether it is during winter conditioning, the weight room or on the practice field. He’s very dedicated, a good leader on our team by example. Really happy for him and how he played.”

The Aztec defense had five sacks for a total loss of 30 yards against the Runnin’ Rebels.

After watching the film from Saturday’s matchup, Hoke said the Aztecs defense will have to continue to press for the entirety of the game.

“From a defensive side of it, we have to make sure we’re leveraging the ball,” Hoke said. “Being very sound and detailed in what we’re trying to do. Our physicalness and the speed we played within the first half was really good. I think in the third quarter we didn’t play with that intent. We’ve got to make sure we do that for 60 minutes.”

Minor miscues and adjustments continued on special teams against UNLV.

Sophomore kicker Matt Araiza has improved his punting skills as he fulfills kickoff, field goal and now punting duties in 2020.

Hoke said Araiza is working hard and the entire special teams corps is focusing on the next play.

“I think it is obviously something Matt has done before in his kicking life,” Hoke said. “He’s got to make a couple of adjustments. His net 47 was good, some of that is a little bit skewed. He had a couple coming off his foot but then a nice job rolling. He continues to compete and get better at it. The other thing in the special teams, we had the one punt that we fumbled. It was great to see Jordan (Byrd) get back in there.”

Now, SDSU heads to Logan, Utah to face the Utah State Aggies, where the Aztecs look to capitalize on their miscues from last week on Saturday at 6:30 p.m. PT.