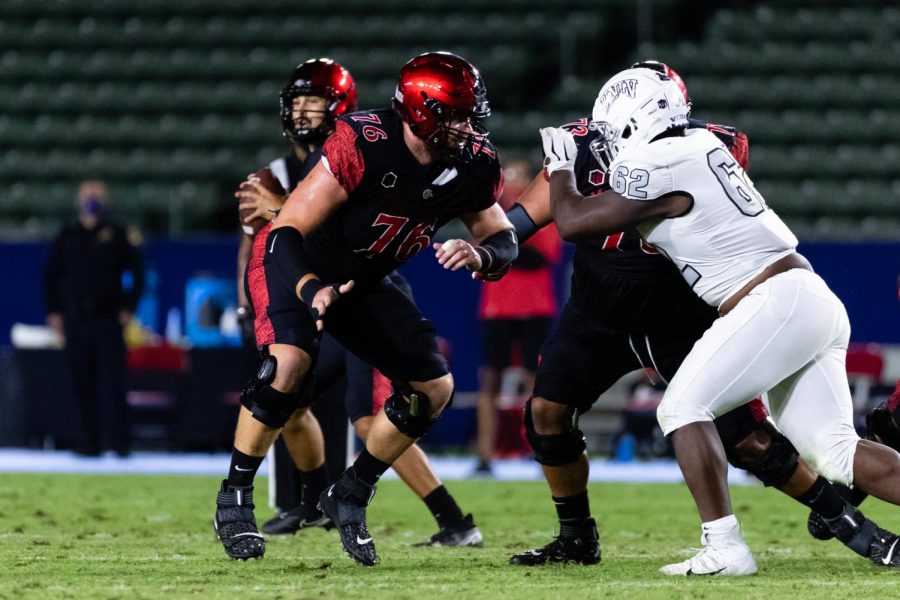 After a 38-7 victory against Utah State on Oct. 31, San Diego State football is starting to gain national recognition for their offensive performances this season.

Head coach Brady Hoke said despite being a defensive line coach by trade, the offensive line is his favorite group on the entire team.

“The guys on the offensive line, they never get talked about,” Hoke said. “hey never get, you know, all the awards. I love those guys because we’ll be a good football team if we’re good up front, and that’s on both sides of the ball.”

“I’m really happy with how Zach (Thomas) and Kyle Spalding have gone to work every day.”

Thomas and Spalding were a part of an offensive line that allowed six running backs to rush for a season-high 417 yards against Utah State and 287 against UNLV this season.

Also, the Aztecs’ offensive line led the nation with the highest-graded offensive line for week nine in college football according to PFF, finishing with a grade of 92.3 — eight points higher than second-place Iowa.

Senior running back Greg Bell, who is third in the conference in rushing yards (268) and scored a touchdown with 161 rushing yards against Utah State, said the success of the entire offense revolves around the performance of the offensive line.

“We thank them a lot,” he said. “Without them, (the offense) can’t get the ball moving or get the passes off. Without them, there’s no running, so without them working hard in practice every day, we (running backs) wouldn’t be able to do what we do.

Capra transferred to the Aztecs from Oregon last season. He started at left tackle for four games and right tackle for two games in 2019 but transitioned to guard this offseason.

Since changing positions, Capra has been able to find success within the group at left guard.

Despite each lineman receiving accolades, Thomas and Spalding remain committed to their work, as they were part of the first group of student-athletes doing outdoor lifting sessions on Nov. 2 at 6:00 a.m.

“Seeing (Kyle) Spaulding and Zach (Thomas) out there, how they went about their business on a short week, I was really excited,” Hoke said.

Spalding, Thomas and Capra look to continue their offensive success this Friday, as the Aztecs will face the undefeated San Jose State Spartans at Dignity Health Sports Park at 6 p.m.