How Rock the Vote registered thousands of people online 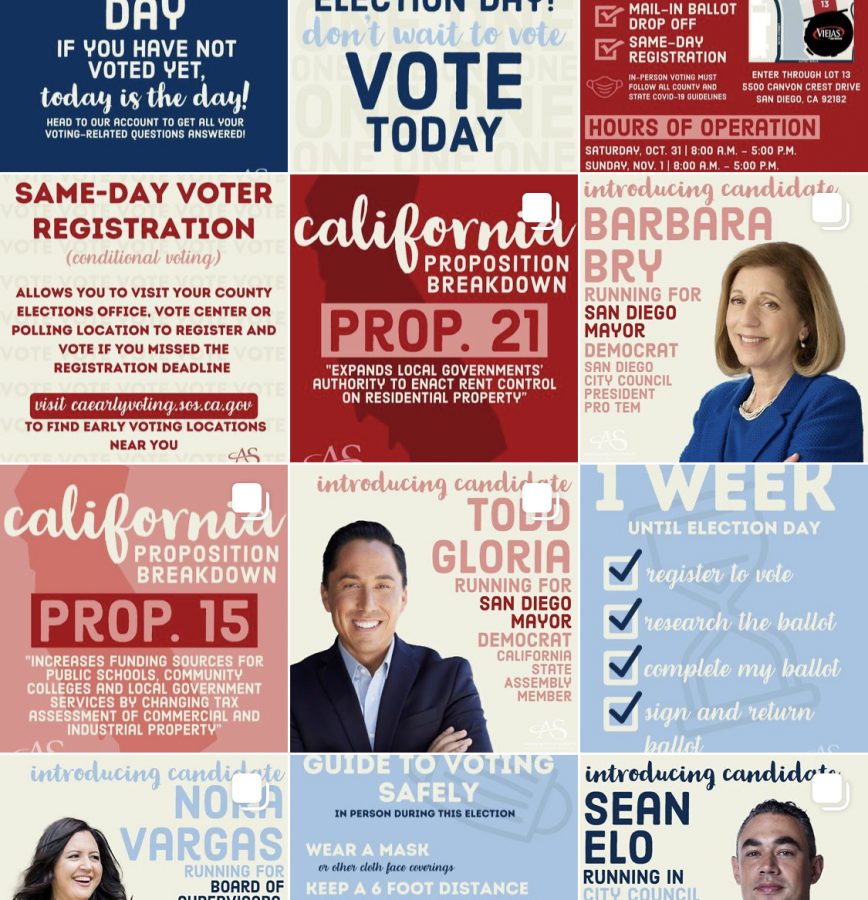 Before every election, Associated Students hosts a Rock the Vote campaign to register as many students as possible to vote and make sure they know how to cast their ballot. This year, the campaign registered nearly 1,400 people.

While mass outreach to students is difficult in normal circumstances, running this campaign during the COVID-19 pandemic has been especially challenging. Due to state and county public health guidance, the university does not allow in-person events, so gone are the days of setting up tables to try and encourage people to register.

“I think the most challenging part of adapting (Rock the Vote) is the fact that we can’t have in-person registration,” said SDSU Rock the Vote Chair Armando Sepulveda II. “We would have had more in-person events.”

Instead, Rock the Vote had to rely heavily on social media outreach. Instagram was its platform of choice, with the official @sdsurockthevote account posting multiple times each week informing voters of what’s on the ballot and reminding them to register. The account even offered weekly “Civic Tours,” or one-on-one sessions with voter registration experts who students could ask any questions they had about voting.

In addition to outreach on Instagram, the Rock the Vote website provided links to register online in every single state, as well as the deadlines to register. It even included info on every single proposition on the ballot in California and most candidates in San Diego County.

All of this information came together thanks to a fairly small team of volunteers.

The education team consisted of a few SDSU students who worked with other small teams like the social media team and the events planning team to coordinate this massive effort to get people registered to vote.

And it certainly was massive, as one of their biggest challenges during this pandemic was the fact that many SDSU students are attending classes virtually and out of state, meaning unlike in previous years, the teams needed to have knowledge about every state in the country.

“I think it was super exciting that we were able to provide information for all 50 states plus DC,” Voter Registration Coordinator Emily Mickelson said. “Just because in the past we’ve only registered people from California, and since we’re in this pandemic and doing school online, students are more likely to be living at home in their home states.”

A large part of this effort was the Rock The Vote website. Working to ensure that all of the information was accurate and presented well was a challenge for the three A.S. staff members working on graphics and website requests.

“The thing I’m most pleased with is the educational aspect that we’ve taken and the emphasis we’ve put on with having accurate information that’s easy to digest for students on the page.”

Social Media and Marketing Lead Beth Bridges said. “The most challenging part has been staying nonpartisan in such a contentious election, and with so much emotion going on in the world right now.”

Aware of the stakes, the social media team worked hard to remain nonpartisan in social media posts, carefully considering elements from the wording to the color of candidates’ names.

Bridges said the Instagram account followed a specific design philosophy alternating between red and blue. But, as she pointed out, “red is associated with Republican, and blue is Democrat.” Therefore, there was a lot of conflict with what color goes to which name, especially in races like California’s 53rd Congressional District, where both candidates are Democrats.

“The fear was that the candidate would be mad if we used the wrong color,” Bridges said. “The compromise we made was making the word ‘Democrat’ big and prominently placed, despite it being in red.”

Despite all these hurdles, however, this year’s Rock the Vote campaign managed to register 1,397 students in just a month and a half—the tenth most out of every California university. The campaign was so successful, in fact, that A.S. is considering keeping the Rock the Vote Instagram page as a permanent fixture of the university, something that has not been done before.

“It was a team effort, it wasn’t just one person,” Sepulveda said. “It wasn’t a one-man game, it was looking at what ideas the team had in mind and implementing them. Did all of them work? Not always. But when we pushed for registration where it mattered, we got the results that we wanted to see.”

Sepulveda hopes that even past this election, Rock the Vote will continue being influential in getting students more involved with politics at SDSU, and says the teams may even reconvene if a special election occurs.

Eligible California residents who missed the Oct. 19 deadline to register to vote online can register in person on Election Day, Nov. 3.

Editor’s Note: Patrick Doyle is the Education Lead for SDSU Rock the Vote.