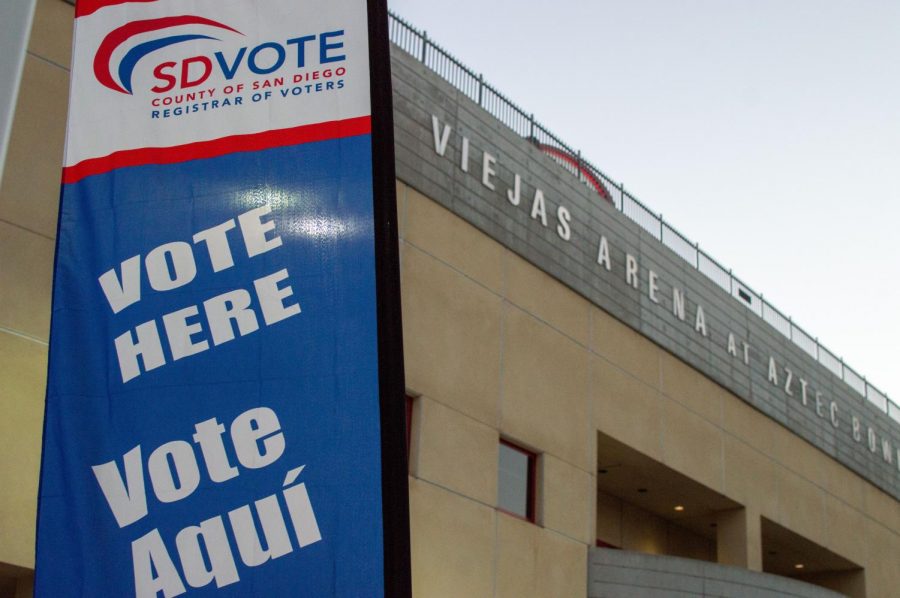 Viejas Arena was one of many super poll sites operated by the county.

by Katelynn Robinson and Jeanette Giovanniello

Students and members of the San Diego community were invited to vote in-person at Viejas Arena located on San Diego State’s campus from Oct. 31 to Nov. 3.

Voting has never been more accessible in United States history. With four days of open polls, mail-in ballot drop stations, and handicap accessible electronic voting more people have the tools they need to exercise their voting rights during the global pandemic.

Voters had the opportunity to register to vote, turn in mail-in ballots, and vote in person at SDSU’s super poll. A super poll allows for same-day registration and conditional voting.

Business sophomore and first-time voter, Riley Murdock, said she is scared for the outcome of the election. Murdock voted in person because she missed the registration deadline.

“I’m scared,” Murdock said. “And I’m scared about mail-in ballots, I’m scared that Trump is going to say it’s a fraud or whatever.”

Voters have the option to drive up to the entrance of Viejas Arena and leave their mail-in ballot with a volunteer poll worker, without leaving their vehicle. The poll workers collect the ballots outside the arena, the voter places their ballot in a locked and serialized yellow bag, and then the ballots are delivered to the registrar of voters that night.

This year, voters who are unable to leave their cars can vote on an electronic device from the comfort of their car. The poll workers accommodate them by bringing a roll out polling station to their vehicle.

“The registrar of the county, they want to make it easy for anyone and everyone to vote,” a poll worker said.

People who lost their mail-in ballots, or lived in surrounding areas including Chula Vista and La Mesa were able to go to Viejas Arena and vote on items specific to their place of residence.

First-time voter and psychology sophomore, Mecca Herron, lost her ballot in the mail so she had to vote in-person. Herron said that her vote feels “safer” since it was done at the polls.

“If my ballot got lost in the mail and it wasn’t even filled out, imagine if I filled it with my vote and sent it. I don’t trust that,” Herron said.

During the first three days of voting, short lines developed, and a small but steady stream of people cast their votes. Nov. 3 had the largest voter turnout; a long socially distanced line developed outside the arena and kept its length throughout the duration of the day.

Alyssa Dodson, a sophomore kinesiology major, and first-time voter received her ballot in the mail, and cast it in-person.

“Either way it goes, there’s going to be civil unrest,” Dodson said. “It’s gonna get crazy, I’m just hoping it’s nothing too drastic.”

Dodson said she thinks there will be a large voter turnout among the SDSU community.

“One of the main things we were pushing at those protests was ‘We’re doing all this right now, but we have to go out and vote to keep that going.’ So I think that definitely helped the turnout,” Dodson said.