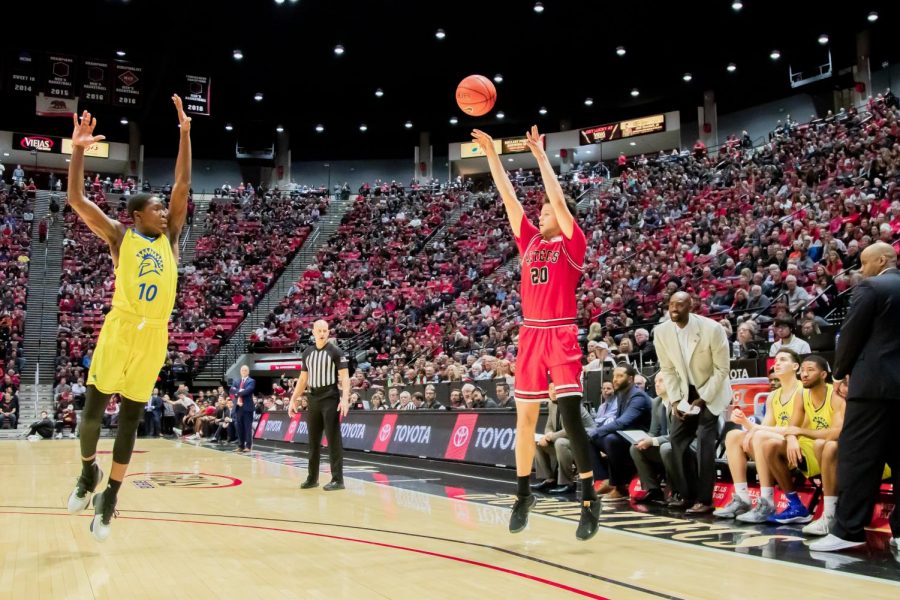 Then-junior Jordan Schakel shoots a 3-pointer during the Aztecs' 59-57 win over San José State on Dec. 8, 2019 at Viejas Arena.

The Aztecs’ first game of the event, and their season, will come against UCLA on Nov. 25. SDSU will conclude the event with a game against UC Irvine on Nov. 27.

SDSU head coach Brian Dutcher was lit up with joy at a press conference following the official announcement.

“It seems hard to believe, but we’re going to have a basketball season starting Nov. 25 against UCLA here in Viejas and that’s really exciting,” Dutcher said.

With the team’s non-conference schedule initially up in the air due to cancellations and concerns due to the COVID-19 pandemic, the program decided to take it upon themselves to get games scheduled.

SDSU was originally scheduled to take part in a non-conference bubble even in Orlando at ESPN’s Wide World of Sports complex, but the event was canceled due to differences over health and safety protocols.

Dutcher was among those with differences but still wanted to play because he felt it was the best way to build a quality non-conference schedule.

“I was never 100% sold that Orlando was a great option for us but I had to get quality games,” Dutcher said. “The only way it looked like I could get Power Five schools to play me was to go to Orlando. I always wanted to stay closer to home.”

Following that cancellation, Dutcher had a preference not to travel by plane for any non-conference games. Dutcher went to SDSU athletic director John David Wicker to see if SDSU could simply host an event themselves.

“I went to John David Wicker right away and said, ‘Can we host one? Are we able to do that?’ And he told me, ‘Absolutely we can host one.’”

“I feel like we have five games locked in,” Dutcher said. “We have a Division II opponent, maybe another Division One we’re waiting on and we’re not going to do anything until we see what the Mountain West does with our schedule. Then, maybe we’ll fit a D2 around there (or) NAIA team that will come in (and) play us here as kind of a game that will fit.”