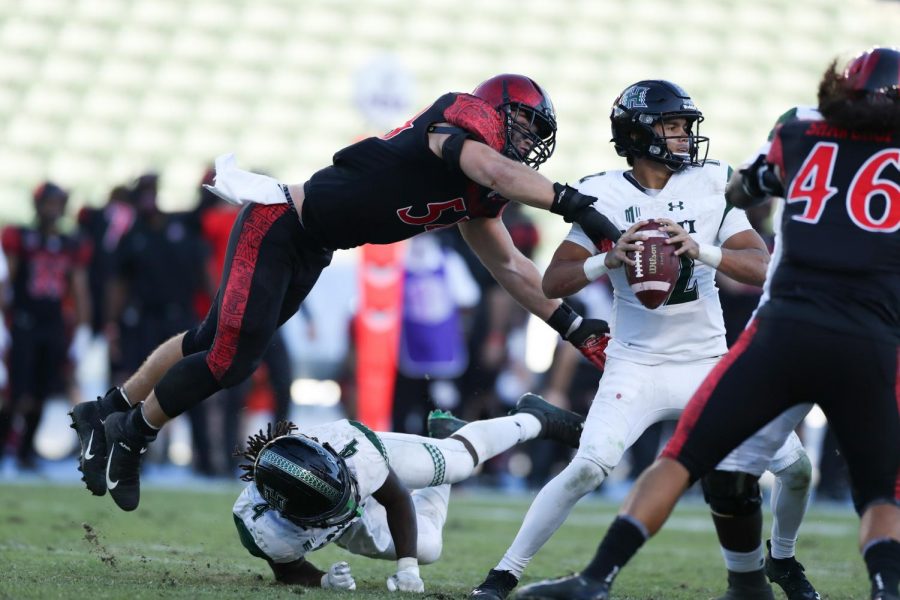 With another 100+ yard performance from senior running back Greg Bell, the Aztecs (3-1) broke away for a 28-0 halftime advantage and led comfortably the rest of the game.

The Aztecs started the game on offense with three straight punts. The only notable play that happened during those drives was a 40-yard run from Bell.

Junior running back Jordan Byrd kept the momentum going during the Aztecs’ fourth drive, scoring the first touchdown of the game with a 51-yard run.

Before the Aztecs’ next drive, Bell told Byrd he wanted a touchdown of his own.

“We’re chasing each other,” Bell said of competition within the running back room. “Jordan breaks a long one, I come to the sideline, tell him I’m going to get mine. If I break a long one (and one of the other running backs comes) to the sideline, (I) tell them to go get theirs. We just try to match each other’s intensity and it worked out well today.”

Bell would end up scoring a 62-yard scamper on the first play of the next SDSU series, extending the Aztecs’ lead to 14-0 near the end of the first quarter.

But for Bell, things didn’t stop there.

The Nebraska transfer scored another touchdown from three yards out to build upon the Aztecs’ already-commanding lead before halftime.

A weak spot in the offense was sophomore quarterback Carson Baker, who only completed four passes on 13 attempts with 30 yards and two interceptions. Only one of those completed passes found the hands of an SDSU wide receiver.

Bell said it was important to produce on the ground while the passing offense was struggling.

Johnson provided a spark on the ground during “garbage time,” collecting 47 yards on four carries. That drive culminated in a 36-yard sophomore kicker Matt Araiza field goal to bring the score to 34-10.

Hoke did not necessarily rule out the possibility of Johnson competing for the starting quarterback job during the postgame press conference.

“I think this: we evaluate the guys on everything,” Hoke said. “We’ll go back tonight, obviously, and take a good look at the film, see where we’re at, see who gives us the best chance to be successful and we’ll go from there.”

The Aztecs gave up 28 points last week against San José State after only allowing 13 combined points in the team’s first two games.

Against Hawaii, SDSU’s defense held its ground. The Rainbow Warriors only managed to put up 10 points — all in the second half.

One play that preserved the first half shutout was a pick-six from senior linebacker Segun Olubi. Not only did it give the Aztecs a 28-point lead, but it was the first interception of Olubi’s collegiate career.

Junior linebacker Caden McDonald also assembled another strong defensive showing. He tied for a team-high seven tackles, including three for a loss, two sacks and a forced fumble. Through four weeks, he leads SDSU in sacks (4.5).

Last weekend, the Aztecs were prepared to face San José State graduate senior quarterback Nick Starkel but he was injured during the first drive of the game. The Aztecs then faced a dual-threat quarterback in sophomore Nick Nash, who ran for 53 yards and a touchdown while handing SDSU its first loss of the season.

McDonald said facing a run threat like Nash and having a full week of preparation had the defense ready for mobile Hawaii sophomore quarterback Chevan Cordeiro.

With Saturday’s win, the Aztecs improve to a 3-1 overall record at the halfway point of the regular season. It’s the third-straight year SDSU has started its season 3-1.

Since the Mountain West Conference announced the eight-game regular season, each game holds importance — especially with the lingering possibility of a COVID-19-related game cancellation.

McDonald said he was happy the team was able to perform well against the Rainbow Warriors after last weekend’s double-digit loss.

“It was really nice,” McDonald said. “We worked real hard all week long just to get better and improve from last week and have a performance that we did today. We still need to get better.”

Despite having a positive record, Hoke said he’s not satisfied with where the team is at.

Up next is Nevada, who is one of the top teams in the conference so far this season. Led by sophomore quarterback Carson Strong, the Wolf Pack (4-0) have wins against Wyoming, Nevada, UNLV and most recently New Mexico.