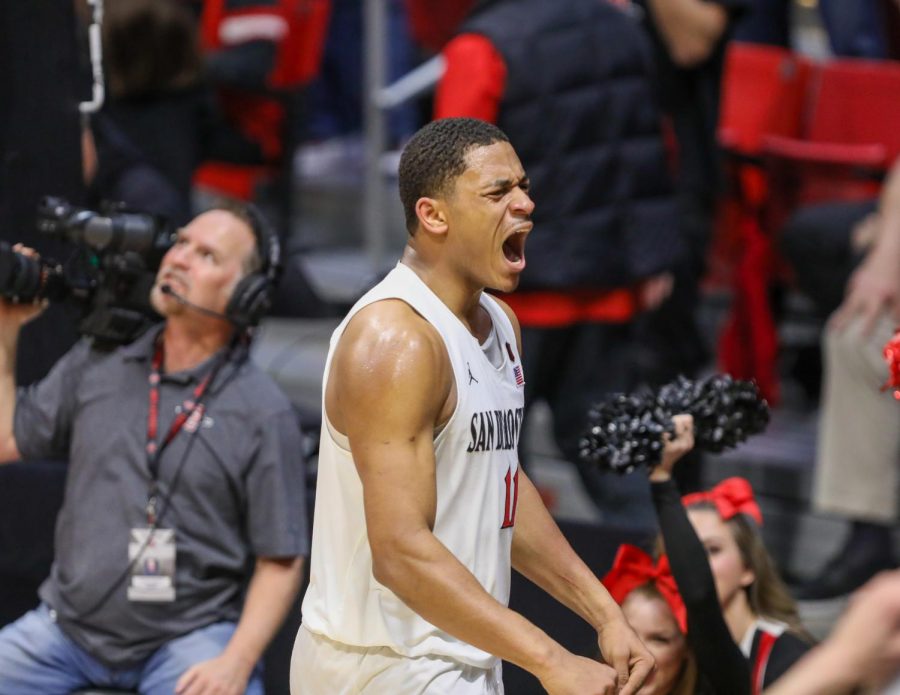 Then-junior forward Matt Mitchell celebrates after a play during the Aztecs' 82-59 win over New Mexico on Feb. 11 at Viejas Arena.

An initial conference-based schedule was announced on Oct. 9 but was changed a month later due to challenges posed by COVID-19. The new schedule reduces travel between conference opponents and adds flexibility if a coronavirus outbreak were to occur.

“This is probably the toughest schedule that we’ve played in my 20 years here,” Head Coach Brian Dutcher said after the revised schedule was announced. “We’re going to be challenged right away and I told the team that we have to be at our best early in the season.”

The updated schedule includes non-conference games. SDSU will participate in a multi-team event starting Nov. 25 with the Aztecs facing UCLA at Viejas Arena. The Scarlet and Black will then host UC Irvine in the team’s second and final game of the MTE on Nov. 27.

Following the MTE will be the first set of in-conference games. The Aztecs will host Colorado State on Dec. 3 and Dec. 5.

The Aztecs will return to non-conference action after that series and travel to face Arizona State on Dec. 10.

Shortly thereafter, SDSU will return to Viejas to play its longtime rival, BYU, on Dec. 18.

The Aztecs’ only scheduled neutral site game will take place against St. Mary’s at Cal Poly in San Luis Obispo, California on Dec. 22.

From that point on, the Aztecs are set to play conference opponents to close out the team’s regular season.

In-conference play resumes right before the beginning of the new year when the Aztecs will travel to Las Vegas and face UNLV on Dec. 31 and Jan. 2.

On Jan. 28 and Jan. 30, the Aztecs will take on Wyoming at Viejas Arena before hitting the road once again to face New Mexico (Feb. 3 and Feb. 5).

Following the series against the Lobos, SDSU is scheduled to come back to America’s Finest City to play San Jose State on Feb. 8 and Feb. 10.

The Aztecs will play their last road games against Fresno State (Feb. 18 and Feb. 20) before wrapping up the regular season at home against Boise State (Feb. 25 and Feb. 27).

Dutcher said he thinks the conference scheduled each matchup to be as fair as possible.

“I think the Mountain West did a good job trying to look at what they felt were the top teams in the league and make sure none of those top teams had a go all those hard games on the road,” Dutcher said. “I don’t know if anyone feels slighted, we certainly don’t. I think the schedule is fair and balanced and we look forward to playing it.”

College athletics are still shrouded in uncertainties as the coronavirus creates the very real risk of a series getting canceled. Although, there’s a little padding in SDSU’s schedule to make up for lost games if the need arises.

Currently, the Aztecs are scheduled to play 25 games but the NCAA permits up to 27 contests this season.

Dutcher said the program could add a Division II or NAIA team to its schedule. USD or UCSD are also possible local opponents that could be added to SDSU’s non-conference slate if a game gets canceled.

“We’re looking at a non-Division I team or two that we can fill in where we think we need game action,” Dutcher said. “If we get a game or two canceled, maybe we’ll look up and be playing one of those local teams if they get a game canceled. You have to be flexible in everything you’re doing, so even though they’re not on the schedule, there’s always a chance somewhere over the course of this season we could play one of them if we both get games canceled.”