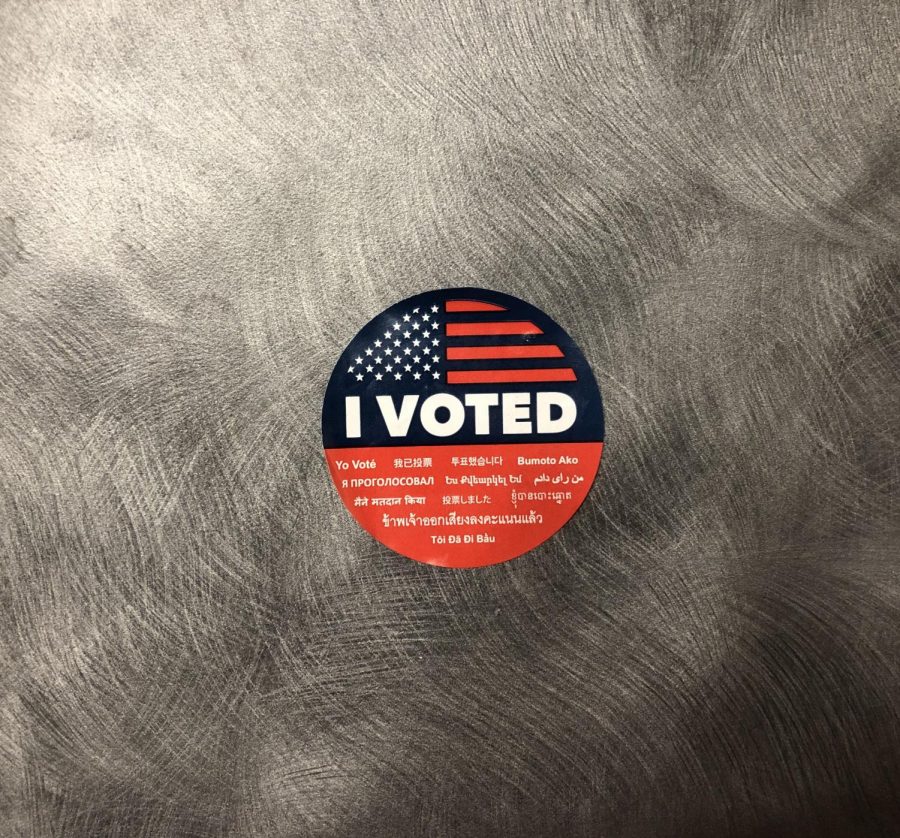 In the United States, Election Day is seen as the peak of democracy, as citizens far and wide 18 years and older cast their vote for president and other various high-ranking offices.

As part of the 2020 election cycle, Joe Biden’s decisive presidential victory led to celebrations across the nation as people took to the streets to express their relief and excitement. However, once the confetti is swept and the celebrating stops we must ask ourselves as a nation, who is left out of this vital decision-making?

Currently, a group of approximately 3.3 million people who were born on American soil are ineligible to vote. These disenfranchised people are the residents of U.S. territories.

There are 16 U.S. territories, five of which are permanently inhabited (Guam, Puerto Rico, American Samoa, U.S. Virgin Islands, Northern Mariana Islands). Each territory has its own government, legislature, and governor, but lacks complete autonomy from the American mainland.

Each of the five territories has a representative in the U.S. House of Representatives, however, they are all non-voting members and can only sit by in silence during most congressional deliberations. There are delegates who are elected every two years (in every territory except Puerto Rico) and a resident commissioner elected every four years by Puerto Ricans.

Now you might be asking, what’s the difference between a colony and territory? Good question. Overall, “territory” is a fancy denomination for a modern-day colony, but Americans likely use this word to make the situation sound less atrocious and more cooperative.

Puerto Rico and Guam have been under American control the longest. Both were purchased in 1898. Guam, in particular, represents one of the more interesting cases of American colonization as it exists in the messy gray area between state and colony and has a complex history with the U.S. Military.

Guam has solely been a U.S. territory since being acquired from Spain following the Spanish-American War, aside from a brief occupation by the Japanese during World War II when American troops abandoned the island. Residents have held U.S. citizenship since 1950 and the island’s governor has been democratically elected since 1968. Previously, the island was under the jurisdiction of the U.S. Navy, and the effects of the American military-industrial complex are still on display throughout the island.

During the navy government’s rule of Guam, they instilled racist westernization tactics and saw the Chamorro people as “[a] population so abused and oppressed over the centuries, so disease-infested, so isolated from the world, so haunted by superstition.” Naval reports from the island painted the Chamorro as uncivilized and defenseless to campaign for further military involvement on the island.

In this period, Chamorro culture was seen as “detrimental” to the population’s advancement and much of it was subsequently wiped forever in favor of Americanization and forced patriotism. By requiring the indigenous Chamorro population to learn English to gain employment, the U.S. looked to bolster their armed forces with Chamorros while paying them less than white sailors and subjecting them to harsh treatment under pre-civil rights era laws.

Since the American occupation took hold, Guam has maintained a long-standing tradition of military involvement and has the highest enlistment rate of any U.S. territory or state. This military spirit includes the Chamorro demographic who make up 37% of the island’s population.

As a strategic island in Oceania, Guam is home to two American military bases and the Department of Defense controls just below 30% of the island, a percentage that is likely only to rise in the coming years. The military involvement on the island is divisive, as some appreciate the military occupancy while others despise it.

Outside of the restrictive military presence, Guam is well known for its tourism industry, which took a massive hit once COVID-19 reached the island. However, much of the COVID-19 spread can be attributed to the irresponsibility of the U.S. military.

In March, the U.S.S. Theodore Roosevelt aircraft carrier arrived in Guam with a COVID-19 outbreak on board. When they arrived, there were less than 100 cases, but over a month later more than 1,000 sailors had tested positive and over 4,000 members of the crew were removed from the ship and quarantined on the island. Soon, the military base’s hospital facilities on the island were overwhelmed and infected sailors were put up in hotels, putting over 160,000 Guam residents and the island’s minimal healthcare resources at significant risk due to their inability to quarantine properly.

Acknowledging the COVID-19 debacle and the stifling military presence, one thing is clear: the U.S. uses Guam and the other territories as leverage. Similar to the longstanding colonial system developed by European nations throughout the last millennium, in addition to the infringement of human rights, location and patriotism play a monumental role in mobilizing these territories.

Over the years, Guam’s population has expressed interest in commonwealth status, or another freer form of self-determination, but the U.S. government has made these circumstances far more difficult and has the final say of approval. The United Nations’ Special Committee on Decolonization classifies Guam as a non-self-governing territory and has worked with Guam to expand its options to achieve greater liberation.

Besides Guam, the remaining four populated territories have wrestled with the consequences of their American classification.

When Hurricane Maria hit Puerto Rico in 2017, hundreds of Puerto Ricans died from the disaster itself, and many more suffered from the resulting damage. Besides the death and despair, certain areas of the island lost power for over a year, making it the worst electrical blackout in U.S. history.

Unsurprisingly, the federal government has left Puerto Rico out to dry and their weak attempts to help only extended the crisis further. The extent of the American relief effort can be summed up by President Trump idiotically shooting paper towel rolls with the inaccuracy of Kyle Kuzma at a crowd of people when he visited a week following the hurricane.

Residents born on American Samoa don’t have automatic citizenship and are U.S. nationals, meaning they are protected by the U.S. government but lack formal rights given to natural U.S. citizens. The government of American Samoa has opposed automatic citizenship for its residents, but in a recent Utah court case the American Samoan plaintiffs say the denomination of Samoans as U.S. Nationals help maintain an “American caste system”. This sentiment is shared by some of the population, but not all, making it hard to find a fair compromise.

Like Puerto Rico, the Northern Mariana Islands are a commonwealth and continue to be influenced by centuries of Spanish rule. Similar to Guam, Chamorros are native to the Commonwealth of the Northern Mariana Islands, and most of the Chamorro land is owned by America’s military. Recently, the military has tried to establish firing ranges on the islands of Tinian and Pagan on land currently occupied by Chamorro residents, leading to significant backlash. However, with the power of Congress, courts and outdated territorial legislature on their side, the military doesn’t have to answer to the residents, no matter how hard they protest and how justified their reasoning is.

Meanwhile, Hurricane Maria also affected the U.S. Virgin Islands in 2017, and the territory took significant damage. However, their economy is currently what’s most at risk. The territorial legislature of the islands with the United States has put the government’s employee pensions in serious trouble and the territory desperately needs to restore the funds. Without U.S. approval, the Virgin Islands won’t be able to access the resources needed to alleviate the situation, meaning they are in danger of falling into massive debt and sacrificing 25% of their GDP by 2024. With the future of thousands of people hanging in the balance, Congress is in full control, and yet they sit thousands of miles away, blissfully disconnected from these people’s lives.

Though the U.S. Congress decides on the livelihood of territories there is little diplomatic presence outside of the self-government structures installed. Puerto Rico is the only territory to receive official presidential visits that aren’t just brief pit stops on the way to another destination. Even so, Puerto Rico has hosted just 10 presidential visits since 1898, despite sitting only 1,000 miles off the coast of Miami.

So, if the federal government doesn’t care enough to include the territories in U.S. relations unless it involves military bases or anything else convenient, why should they be the ones to determine the rights of people living halfway across the world? And why can’t citizens in the territories vote for the positions which get to determine their status?

In the case of Guam, thousands of homes are being threatened by a plan to move the U.S. Marine base in Okinawa, Japan to Guam by 2022. These plans also include bulldozing acres of forest and significant indigenous sites, ultimately placing the ecological future of Guam in danger. Further action must be taken to prevent full-blown military domination of the island and the erasure of years of settlement and culture. If not, Guam will just end up being yet another settlement that the U.S. Military used, abused and overtook to attain their goals. Don’t let that happen.

In this matter, there is no public input. No democratic process is in place to ensure the will of the people is considered. The military and Congress can move forward unchecked. That needs to change.

The most integral step in fixing this situation is to ensure residents living in the territories are heard. Whether the territory population wants statehood, unionization with other American settlements, full autonomy, or commonwealth status, it should be their decision. Who the hell cares if we add a 51st star to the flag, it’s an ugly flag anyway. In addition, it’s significant the indigenous population whose history is rooted in the islands get a loud voice, instead of imperialists looking to “save” islanders from themselves — I’m looking at you, U.S. Navy.

This process begins with granting residents in the territories the right to vote. If America really sees itself as a beacon of representative democracy, the federal government should at least function like it and issue this simple request.