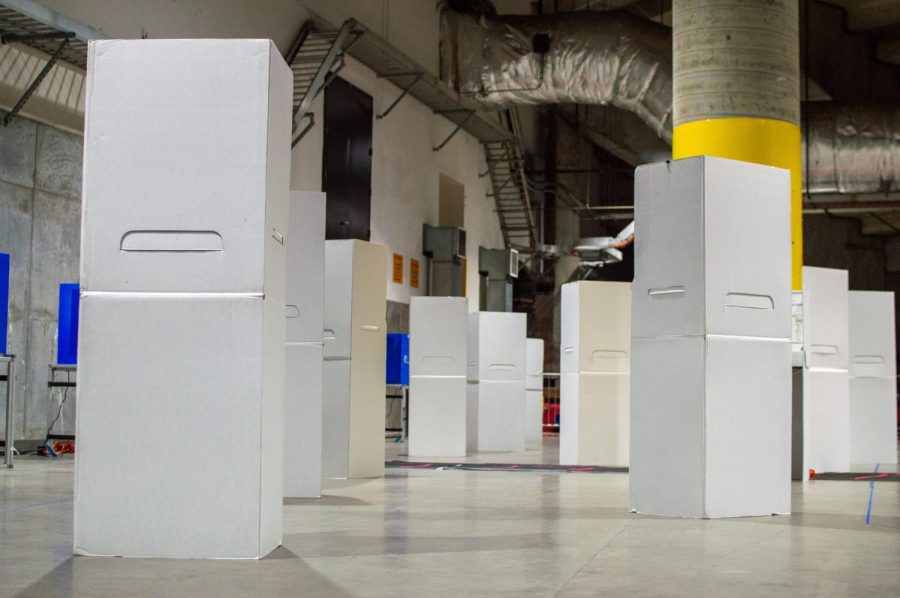 Viejas Arena (pictured here) served as one of many polling sites where voters could decide on one of the 15 measures on the ballot in California.

Earlier this month, California voters passed five of the propositions on the ballot and rejected seven.

Proposition 17, which allows state parolees to vote in California, passed with support from about 59% of voters, according to the Associated Press.

“I just think that it was a step in the right direction, and it’s going to give people a voice who have always felt speechless before and like their voice never mattered,” San Diego State senior and parolee Sarah Norris said. “It’s a generational feeling. It’s a lot on our generation to educate those who can vote now.”

About 50,000 new voters will be eligible to vote in future elections, thanks to Proposition 17.

“There’s a huge population of people who are on paperwork who do want to vote,” SDSU alumnus and former parolee Moises Garcia-Perez said. “They have a political opinion that they feel towards their government, and they want their voice to be heard.”

While the passage of Proposition 17 seems to be an indicator that Californians want to reform the state’s criminal justice system, other propositions that would do just that failed to garner voters’ support.

Proposition 25 looked to replace cash bail with a system based on public safety and flight risk, among other misdemeanor changes.

Norris said she wasn’t surprised that Proposition 25 didn’t pass because lots of money is made through the bail industry and the prison industrial complex.

“I think (passing it) would make it more equitable for everybody when they are arrested because as it is now, the only people who can make bail are people who have the money or their parents or family have that money,” Norris said. “That means it’s more of an upper-class, middle-class privilege.”

Heavy hitters in the bail industry threw more than $11 million behind campaigns opposing Proposition 25, according to CalMatters.

On the other hand, Garcia-Perez said he is in favor of keeping a cash bail in place.

“If I wouldn’t have been able to get bailed out, I probably wouldn’t have finished school on time, and it would’ve just backtracked me for my education,” he said. “I was already behind, and I just feel like people should be able to bail themselves out.”

Garcia-Perez said his mom refused to pay for his bail, and he got another person to pay it.

He also said people who get bailed out don’t go out and commit crimes immediately after being released.

Another proposition that failed to pass was Proposition 20, which aimed to toughen sentencing in criminal cases and reduce the number of prison inmates eligible for early parole.

Norris also said she believes many people think their vote doesn’t matter to the point where people who have always had that right still don’t exercise it.

“I feel like (in) this election, a lot of people suffered from nihilism because they were like ‘oh, why does my vote matter,’” Norris said. “If collectively, people think it doesn’t matter, then it won’t matter.”

Norris is excited about being able to vote, but she said she struggles to decide which party she identifies with.

Norris said her dad is a “die-hard Republican,” but she doesn’t agree with all Republican views. Republicans aren’t in favor of restoring rights to felons or rehabilitating them in most, if not all, ways.

In 2019, Florida’s Republican-controlled state legislature and Governor Ron DeSantis severely limited a voter-approved amendment to the state’s constitution, allowing an estimated 1.5 million former felons to vote. The legislation requires formerly incarcerated individuals to pay all court and administrative fines before registering to vote.

“How can I associate with a party when I know they are against me?” Norris said.

Garcia-Perez said he’s also happy Proposition 17 passed, and he recalls his experience during the end of election week.

He said he was shocked former Vice President Joe Biden won since he thought President Donald Trump would use his money and influence to win again.

These propositions or ones with similar changes may show up on the ballot again during the midterm election in 2022. Now that state parolees can vote, more criminal justice reform measures may pass in California.