With the 2020 election over, SDSU Democrats, Republicans and political scientists see polarization rising 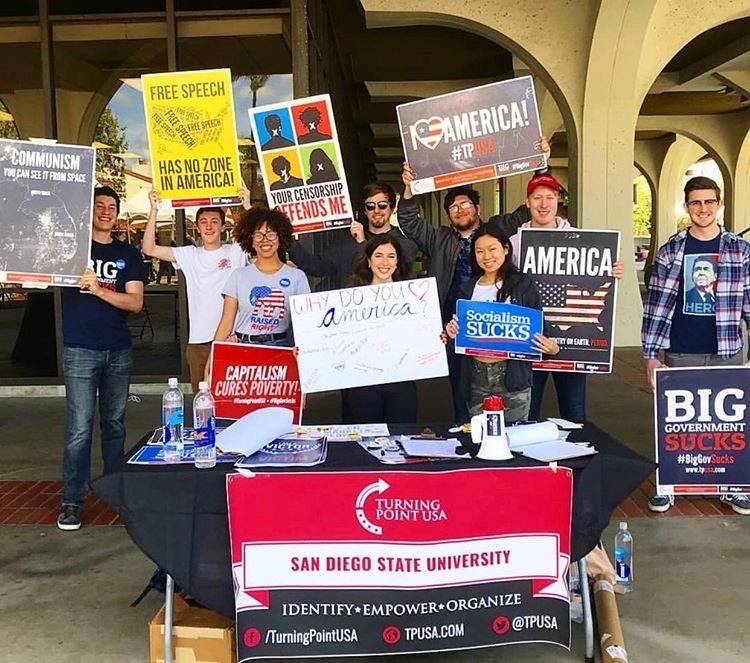 Turning Point USA at SDSU, a student political organization on campus, agrees that polarization has been prominent in politics, especially following the 2020 election.

If one were to observe Newton’s cradle, they may notice the outer spheres are creating the continual momentum, and the ones in the middle remain still. Like Newton’s cradle, the 2020 Presidential Election had its fringe groups who created the most noise, and the moderates who absorbed the brunt of the impact, causing party allegiance and polarization.

After President-elect Joe Biden’s victory, polarization amongst supporters on all ends of the political spectrum grows, as accusations of “voter fraud,” “stopping the count” and others have been spewed out on social media.

Despite the amount of noise extreme activists make, and attention they draw, the perception of polarization is different among average Americans and political scientists.

As a result, King believes the average voter has been slightly pulled towards the margins and Americans dislike the other party more than they like their own.

Dylan Meisner, member of SDSU Democrats, attributes the polarization mostly to President Donald Trump. However, he believes this trend started before Trump got into office.

“I think, for Democrats and liberals, broadly, this election is extremely existential because many of us perceive Donald Trump to be a threat to America as we know it, and obviously we’re going to react that way,” Meisner said.

He believes Trump’s assault on immigration, attack on the press and foreign policy are why Democrats see him as an existential threat.

King is convinced Trump has hinted at authoritarian nationalism by his denunciation of Democrats, reliance on executive orders, attacks on the press and his turning of political opponents into enemies, but does not believe this route is likely.

“I do not believe that Trump is going to emerge as a full-fledged authoritarian nationalist, but is there a route for him to move that way?,” King said. “At this point, given his denial of electoral defeat – yes, it is possible; unlikely, but possible [and] it would be very, very, very disturbing if he does.”

He only won in the eyes of the FAKE NEWS MEDIA. I concede NOTHING! We have a long way to go. This was a RIGGED ELECTION!

According to a study by Pew Research Center, a majority of Trump supporters have similar attitudes about President-elect Joe Biden.

Meisner has been a proponent of Biden’s throughout much of the primary because he believes Biden has been a voice against the far left Democratic supporters, whom Meisner is not a fan of and believes they have contributed to the divide as well.

Meisner also works for the Lincoln Project, a political action committee he says is meant to form a bipartisan coalition with ex-republicans and current republicans to vote Trump out of office. They are notorious for advertisements targeting the Trump administration.

This one claims Trump has loyalty problems with the individuals around him.

Although Meisner thinks the Lincoln Project is doing good work, he admits it’s equivalent to what Trump does on a daily basis.

“Absolutely we’re mean, and that’s because we’re meeting Donald Trump on the level that he chooses to play by,” Meisner said.

Although Meisner places the blame for polarization mostly on Trump, Republican voters have a different scapegoat.

“I think a lot of it comes from the major news media outlets, they’re so quick to put out a lot of information so quickly, and there’s not very much contesting what they put out,” Mapp said.

She believes portrayals of Trump supporters as racists, xenophobes and homophobes – without evidence to back up those claims – is information put out by the media, which she says is easy for impressionable college students to latch onto.

Turning Point USA is a non-profit organization that educates and promotes ideas of limited government and free markets to students across the country, and they are opposed to socialism.

Trump has also claimed Biden wants to turn America into a socialist country.

This election is a choice between the AMERICAN DREAM and a SOCIALIST NIGHTMARE. Our opponents want to turn America into Communist Cuba or Socialist Venezuela. As long as I am President, America will NEVER be a socialist Country! https://t.co/gsFSgh2KPc

Cam Soutter, vice president of Turning Point USA at SDSU, disagrees with the tactics used by Turning Point and other conservatives who paint the Biden administration as socialists.

“That entire movement, kind of centralized about making socialism like the boogeyman in this election is incredibly misleading,” Soutter said. “I think that people are being very deliberately deceitful about that.”

However, Soutter believes a reasonable concern which anti-socialists could have is the more progressive members of the Democrat party having an influence on the administration. Soutter is a registered independent, but leans conservative, and thinks the MAGA crowd, as well as far left Democrats, have both contributed to polarization online.

King also thinks painting Biden as a socialist is misleading because he has no incentive to become one.

“Politically, he must negotiate with a, most probably, Republican Senate, which will shift him toward the center.” King said.

Through all the victimization of political parties, King believes retrospective voting and race are the factors to observe in this year’s election.

Retrospective voting is “how citizens evaluate and act on their perceptions of government performance,” according to the Annual Review of Political Science.

This phenomenon is studied heavily when natural disasters occur because people’s welfare is at stake, and the incumbent president usually takes the blame for the events and is voted out. This year, that disaster was the COVID-19 pandemic.

Through King’s analysis of the current exit polls and tight election race, the retrospective effect was much less than he was anticipating, and he credits this to party allegiance and political polarization.

In regard to polarization, King believes race is the strongest factor when looking at why people stay or leave their political parties.

“The Democratic Party intentionally has made appeals to people of color and minorities over the last 30-40 years, increasingly so,” King said. “On the other side, the Republican Party started in the late 1970s with something called the Southern strategy, intending to get Southern whites to vote Republican.”

A majority of people of color voted for Democrats in this election and a majority of white people voted for Republicans, according to an Edison Research exit poll. However, there were some slight changes in the voting demographics for this year.

A 15,590 respondent exit poll conducted by Edison Research showed that the Democrat minus Republican voter margins from 2016 to 2020 decreased for each race listed. The white voter margin dropped by 3%, which means Trump received less white votes. Democrats received less votes from Black, Latino or Hispanic and Asian voters, with the margins decreasing respectively by 6%, 5% and 11%, according to the Edison Research exit polls.

This racial polarization among voters is nothing new, and King, although he wishes it were not true, places part of the blame on ethnic antagonism instigated by Republicans.

In a study done by the Proceedings of the National Academy of Sciences, where 1,151 Republican and Republican-leaning Independents responded to a survey on YouGov about offenses of different democratic principles, researchers found ethnic antagonism to be the strongest indicator of deviating from democratic norms.

This included “concerns about the political power and claims on government resources of immigrants, African-Americans, and Latinos.”

King believes although people are not making these decisions as consciously as we think, it has caused a large percentage of non-college educated white men to gravitate towards the Republican party.

Although the study of ethnic antagonism points towards racial and partisan polarization, the data is not consistent because Trump received slightly more votes from people of color this year, as previously mentioned, according to the Edison Research exit polls .

Mapp, the President of Turning Point USA at SDSU, is Black, and she says she has been antagonized for being a woman of color who happens to be conservative.

While at a Turning Point event on campus, a professor approached Mapp and mocked her for supporting capitalism. Mapp said she was trying to make the point on how the economic system helps lift people out of poverty, and the professor attempted to rebut Mapp’s points by saying “they” were murdering and raping her community and Mapp was brainwashed by white people. Soutter was also at the event and witnessed the professor speaking to Mapp in that manner.

“What she said to me … only affirmed [to] me in choosing to be on the right,” Mapp said.

The antagonization by extreme activists will continue to be the outer spheres in ‘America’s’ cradle. This gives individuals who already identify with a particular party no choice but to stick with them. The constant demonization of average Americans for their political beliefs, and painting them as if a majority of these individuals have values aligning with these extreme activists is irresponsible and divisive. Thus, the polarization continues.

“The fact that it was so close is the story of this election, and at the core of that story is intensifying party allegiance,” King said.