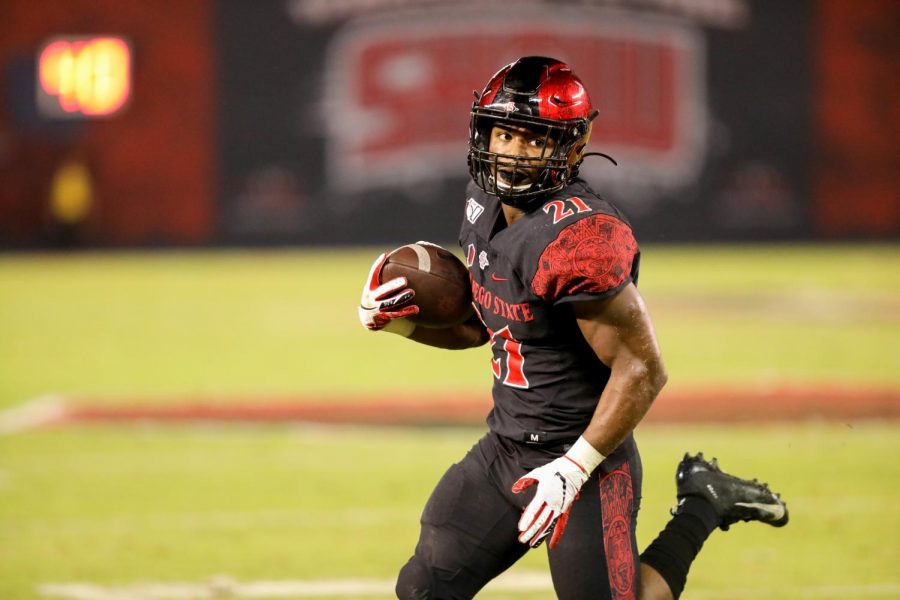 Then-sophomore running back Chance Bell carries the ball during the Aztecs’ 17-13 loss to the Wolf Pack on Nov. 9, 2019 at SDCCU Stadium.

San Diego State football lost to the Nevada Wolf Pack 26-21 on Saturday afternoon. The Aztecs have (3-2) now lost two of their last three games and are now sitting at fifth in the Mountain West standings with just three games left this season.

The Aztecs got off to a great start, with the offense putting up 21 points in the first half. However, once the second half began, things could not have gone worse for the SDSU offense.

Head coach Brady Hoke’s offense struggled to get anything going out of the locker room, collecting five straight three-and-outs that eventually cost them the game.

Here are three takeaways from the loss.

Hoke kept it under wraps for the entire week, but right before kickoff, he revealed Georgia Tech transfer and junior graduate quarterback Lucas Johnson would get the start over former starter and sophomore quarterback Carson Baker.

Johnson started off quickly with three consecutive passes to get to about the 50 yard line before a failed lateral pass to senior running back Greg Bell resulted in a fumble recovered by Nevada.

His next drive, however, is what the Aztecs signed up for when they brought in Johnson. Johnson completed a 35-yard pass that was hauled in via a diving catch from sophomore wide receiver Jesse Matthews.

Johnson followed it with a 35-yard rushing touchdown on the following play for the first score of his Aztec career.

Johnson was able to go for 69 yards passing in just the first two drives of the game. Compared to the 30 total passing yards the offense amassed last week against Hawaii, the offensive gameplan appeared much different than what we’ve seen through the first four weeks of the season.

Hoke said he liked what he saw from Johnson in the first half.

“I thought he was doing a great job with the offense,” Hoke said. “I think taking some shots early, some play action, RPOs. I thought he did a nice job and obviously, we were rolling decently and had some good things going.”

Then, the second half began.

SDSU began the second half with five consecutive three-and-outs and struggled to get anything going offensively.

Johnson left the game in the third and fourth quarters after dealing with hamstring issues. That left Baker to return to the field for two series on two different occasions. He was also unsuccessful in generating any production on offense.

Johnson, however, would eventually return, this time with a chance to erase the offense’s second half struggles if he could lead his team to a touchdown with just over three minutes remaining.

Unfortunately for SDSU, the drive ended with a turnover-on-downs that gave the ball back to Nevada, who finished the game in victory formation.

Hoke said Johnson’s second-half struggles were no doubt because of his injuries, but he also gave credit to Nevada’s defense.

“I think, obviously, his ability to make some plays with his feet (was affected),” Hoke said. He was doing a good job throwing the football and I think our receivers went and got a couple of very nice (plays). I think overall, it was one of those things (in which) they started playing pretty well.

2. A top defense versus a top offense

Going into this game, one of the main storylines was the matchup between the Mountain West’s top defense in SDSU facing the conference’s top offense in Nevada.

That matchup just might have lived up to the hype. The Aztecs’ defense didn’t shut down the Wolf Pack by any means, but they got stops when they needed it. In the first half, SDSU held Nevada to three field goals following drives that got them to the red zone. The defensive line was also able to get persistent pressure on Nevada sophomore quarterback Carson Strong numerous times.

One matchup that stood out was the deep-ball battle between SDSU junior cornerback Darren Hall and Nevada junior wide receiver Romeo Doubs.

Doubs had his moments, including a 50-yard touchdown reception in the third quarter, but so did Hall, covering and forcing an incompletion from Doubs during a pivotal third down in the fourth quarter. Nevada would send out its kicking unit, and Nevada kicker Brandon Talton missed the kick, giving the Aztecs’ offense another chance.

While the Aztecs couldn’t get anything going offensively on the ensuing drive, Hall came up with the defensive play of the game.

With 3:23 left in the fourth, Hall caught a pass that was initially tipped by Doubs for an interception, setting the SDSU offense up in prime field position.

Johnson would come back into the game with a chance to win it, but in a game where it was the Aztecs’ defense that garnered so much attention, it was the Wolf Pack’s defense who ended up sealing the victory.

While SDSU’s defense certainly wasn’t the reason the Scarlet and Black lost, junior linebacker Caden McDonald said there were errors that gave Nevada chances to capitalize on.

“We should have made better stops, we had two dropped interceptions that could have given the ball back to our offense to give them more chances to score where we don’t even put our offense in that situation.

3) An unusual day for run game

In the Aztecs’ first four games, the offense was able to put up an average of 246 rushing yards per game.

On Saturday, however, SDSU was only able to put up 109 yards — much different from what the team is used to from the running backs.

An ankle injury to senior running back Greg Bell, who totaled 45 yards and a touchdown on the day, played a major part in why the Aztecs struggled to get their ground game going. Hoke said Bell has played through injury before, but today was a challenge for him regardless.

“It was one of those things where he just wasn’t 100%,” Hoke said. “He’s played not being 100% before. I’ve noticed his toughness, so this is something that definitely, as time wore on, became a little bit more problemsome for him.”

What is particularly head-scratching, however, is SDSU’s other running backs, juniors Chance Bell and Jordan Byrd, only totaled 45 and eight yards on the day, respectively.

Hoke noticed these issues as well and said some changes may need to be implemented going forward.

“I think, obviously, when guys get dinged up a little bit, Greg’s a pretty special talent,” Hoke said. “I think, also, we’ve got to evaluate how we handle the line of scrimmage. I think we did in the first half, not so much in the second half. And as we look at (the film), we’ll go back and see if there’s some things that maybe we need to tweak.”

Senior offensive lineman Zachary Thomas said while having Greg Bell would have helped, his team didn’t stick to what they prepared for.

“I thought Nevada had a good defensive front,” Thomas said. I mean it would have helped to have Greg, but we have a bunch of great (running) backs. We could have gotten it done with any one of them. We just needed to stick to the game plan and execute that better in my opinion.”

The Aztecs are scheduled to play their next game on Friday, Nov. 27 on the road against Fresno State, but COVID-19 issues could potentially put that game in jeopardy.