Aztecs-Bulldogs canceled due to COVID-19 concerns 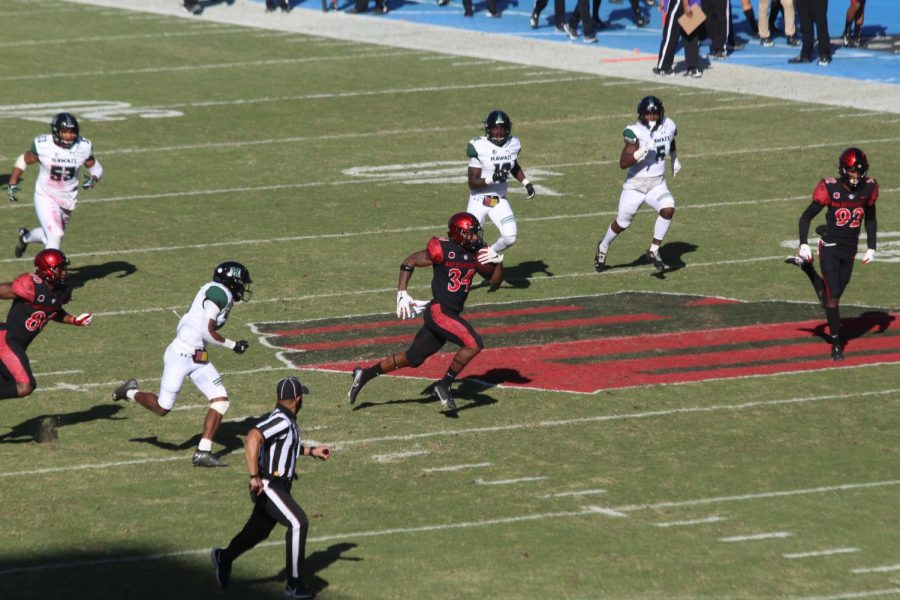 Senior running back Greg Bell rushes for a touchdown during the Aztecs’ 34-10 win over Hawaii on Nov. 14 at Dignity Health Sports Park in Carson, Calif.

The next chapter to the Battle for the Oil Can Trophy will have to wait for now.

This is the second consecutive game Fresno State has cancelled because of potential positive coronavirus tests. The Bulldogs were supposed to play San Jose State on Nov. 21.

This game will be considered as a “no contest with no plans to reschedule the game.”

The Aztecs, who are coming off a loss at Nevada on Nov. 21, are still looking to play this week, even if it means playing an opponent  outside the MWC, according to Director of Athletics J.D. Wicker.

“We are disappointed about the game on Friday being canceled due to COVID issues but the health and safety of our student-athletes is most important,” Wicker said in a news release. “We will actively search for a game this weekend because our coaches, student-athletes and staff want to play. We have reached out to the conference office and the Pac-12 that we are actively looking for a game. We will have to see how testing goes this week for all of the schools in our conference and the Pac-12.”

There are now several possibilities at play with the Aztecs having an open week.

In the Pac-12, two games were canceled this past weekend with Arizona State at Colorado and Washington State at Stanford.

If ASU and WSU continue to have positive tests this week, it could open the schedule for SDSU to play California (who plays Stanford Nov. 27) or Washington (who plays Washington State Nov. 27)

Another possibility is Brigham Young University, who is supposed to play the Scarlet and Black on Dec. 12. That game could now be moved up.

The final possibility is the Aztecs playing another MWC team if a second game in the conference gets canceled.

SDSU is slated to play Colorado State on Dec. 5 at Dignity Health Sports Park in Carson, California at 7:30 p.m.