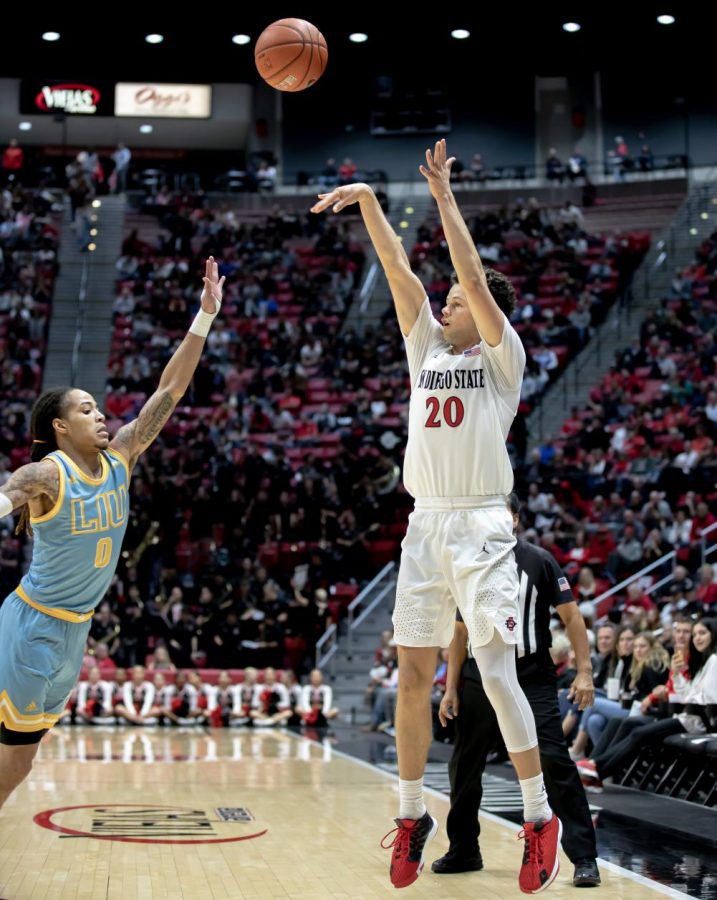 Then-junior guard Jordan Schakel shoots a 3-point shot over a Long Island defender during the Aztecs’ 81-64 win over the Sharks on Nov. 22 at Viejas Arena.

As the 100th season of San Diego State men’s basketball begins on Nov. 25 against UCLA, the Aztecs are coming off of what some consider to be the best season in program history.

The 2019-20 team finished with a 30-2 record, winning a school record 26-straight games, ranked as high as No. 4 in the AP Top 25 and clinching another Mountain West Conference regular season title.

One of the main reasons behind the Aztecs’ record-setting success last season was their versatility on offense. Malachi Flynn and Yanni Wetzell operating a ball screen. K.J. Feagin attacking the lane and shooting off the dribble.

Last year’s team had the ability to attack teams in a variety of ways. From free throws, to inside the paint and beyond the arc, it was difficult for opponents to defend the Aztecs on a nightly basis.

Now, with Flynn, Feagin, Wetzell and others gone, head coach Brian Dutcher will have to figure out how to replace their scoring and impact on the team.

However the cupboard isn’t completely bare.

In fact, it has been infused with a mix of experienced returning players, graduate transfers and a highly-regarded freshman class.

Here’s a look at what to expect from SDSU on offense this upcoming season.

Elevated roles ahead for Matt Mitchell, Jordan Schakel and others

Every season, as one player or more leaves the team for graduation or professional leagues, another one has stepped up to fill in the void.

Senior forward Matt Mitchell and senior guard Jordan Schakel are the two most experienced players on the roster, each entering their fourth season on the Mesa.

With their experience and veteran leadership, Dutcher expects Mitchell and Schakel to go through an adjustment phase toward becoming the go-to guys on offense.

“Jordan (Schakel) and Matt (Mitchell) are both capable of stepping their games up, but with that said, they’re going to have to adjust to defenses gearing toward them specifically, so we’ve worked on that,” he said. “They’re going to have to make plays for themselves and their teammates, and that’s the challenge.”

Schakel said he along with other veterans on the roster feel prepared to step into the leadership role.

“We want a player-driven team,” he said. “A lot of the older guys can hold the younger guys accountable and make sure that’s how we (as a team) want it at all times.”

Senior guard Trey Pulliam will be filling in the starting spot at point guard, taking over the main ball-handling duties on offense alongside Cal State Northridge grad transfer and senior guard Terrell Gomez.

Last season, the Aztecs were 13th in the nation in three-point field goal percentage, hitting 38% from beyond the arc. A majority of those shots would come off of a Flynn ball screen.

Even with Flynn gone, expect to see more of the same philosophy from the Aztecs this year.

As players shift into new roles this season, Dutcher said it will take time to truly figure out the overall identity of the team. However on offense, the principles he preaches everyday in practice will continue.

“On the offensive end, (we want to) share the ball, make timely plays and play with great confidence and swagger,” he said.

This past offseason, SDSU got older once again.

Gomez and senior forward Joshua Tomaić from Maryland transferred to the Mesa for their final season.

Their addition provides vital depth and experience to an already talented roster, which in college basketball is huge for a program like SDSU.

Having veteran leaders on the roster, who have been through the journey of a full season in competitive conferences such as the Big West and Big Ten, adds leadership to help players in critical late-game situations.

Similar to Flynn, Gomez is small but plays with a big mentality. The Los Angeles native led the nation in free throw percentage and finished top ten in made 3-point shots, 3-point attempts per game and 3-point field goal percentage.

Like Wetzell, Tomaić brings offensive versatility to the Aztecs. He can score through post-ups, layups and also adds the ability to shoot from mid-range and beyond-the-arc.

Having a forward who can stretch the floor with outside shooting puts pressure on opposing defenses to prepare for it – making the Aztecs even more dangerous on the offensive end.

When junior center Nathan Mensah walks out onto the court during the Aztecs’ season opener, it will be the first time he’s played basketball for the Aztecs in ten months.

He last played on Dec. 28 against Cal Poly, missing the second half as he felt unwell.

It turns out Mensah developed a blood clot that became a pulmonary embolism.

This injury ended his 2019-20 season prematurely, and forced him into months of rehab on blood thinners and solo workouts.

Now, Mensah is fully recovered, and looking to make up for lost time.

One area where Mensah improved as a player this offseason has been on offense. Schakel has easily seen a major difference so far in practice.

“His aggressiveness and confidence is the main thing that’s made the huge jump,” Schakel said. “When your confidence is high, you just play better, you look better, you’re faster, you’re stronger. You just seem to have things rolling and I think that’s where (Mensah) is at right now.”

The Aztecs welcome seven freshmen to the Mesa this season. There’s no doubt that these players will serve a critical role in the offensive success.

One player mentioned most by players and coaches has been freshman guard Lamont Butler. The Moreno Valley, Calif. product has caught the eyes of coaches and veteran teammates during practice.

“I like Lamont’s game,” Schakel said. “He’s just tough, he’s gritty and he’s strong. He’s got a good build for a freshman and has been playing well.”

Another freshman guard, Keith Dinwiddie, has been revered by Dutcher for his ability to score the ball during practice.

“Keith Dinwiddie is going to be an elite scorer,” Dutcher said. “He can score now, he scores in practice everyday.”

The one challenge facing these freshman players: simply getting minutes on the floor.

“I like all of my freshman (players),” Dutcher said. “It’s just going to be tough for them to carve out minutes with all of the veterans I have back.”

Talent is evident in each of these players, but like all freshmen in college basketball, there will be a fair share of highs and lows. The important aspect to observe is how they respond to those low moments, and that will come as the season goes along.

Nobody has any idea how the 2020-21 season will go for Dutcher’s Aztecs. Because of the nature of COVID-19, everything can go south at any moment.

The one constant thing remaining heading into the home opener against UCLA and the season is this – the offensive talent amongst this Aztec team is plentiful. Points will be scored. Will it lead to another Mountain West title? It remains to be seen.

All we can do is sit back and watch.