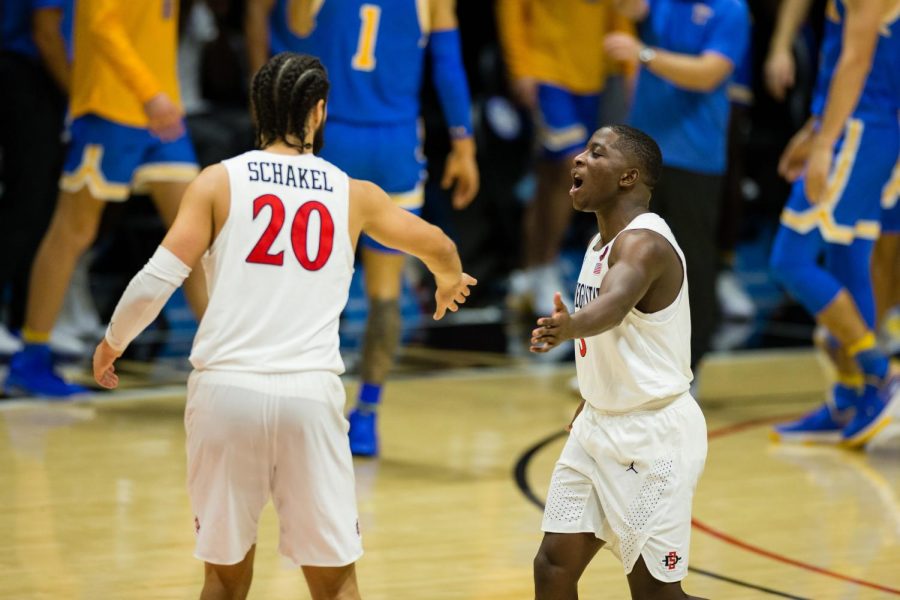 The Aztecs did not earn a spot in the AP Preseason Top 25 poll, but showed their stripes with an emphatic second-half performance. The Bruins (0-1) are now the only ranked team in the country with a loss attached to their name.

It was also the first time UCLA lost a season-opening game in nine years.

Head coach Brian Dutcher said he expects the Aztecs to beat teams no matter their ranking.

“We expect to win, and that’s no disrespect to UCLA, but coach (Steve) Fisher said a long time ago we’re not a one-hit wonder, we built a program,” Dutcher said. “We add pieces, we develop players and we expect to win. Does that mean we win all the time? No, but our expectation is to win every game we play.”

Senior guard Jordan Schakel and senior forward Matt Mitchell scored 15 points each to lead the Aztecs to their first win of the season.

1. Defense propels the Aztecs yet again

During Monday’s press conference, Dutcher said he wanted the team to rely on defense as its “trademark.”

The Aztecs did just that Wednesday, forcing the Bruins to commit 15 turnovers — 10 of which came in the first half. SDSU capitalized on the Bruins’ miscues, scoring 14 total points off turnovers on the night.

The Bruins got off to a hot start, shooting 73% from the field in the first eight minutes of the game, but later cooled down.

UCLA was only able to sink three out of its next 11 shots, and the Aztecs were able to capitalize by going on a 8-0 run that spanned just over four minutes. By halftime, the Aztecs had a six-point advantage — its biggest of the night until that point.

“We played pretty good defense the first half,” Dutcher said. “Even though they shot 50%, we were able to force them into 10 turnovers and that was a huge part of it because they were scoring when they got shots.”

The Aztecs’ defensive prowess even improved coming out of the locker room.

Mitchell said the team made adjustments at halftime in order to limit the Bruins’ scoring opportunities.

“We were a little bit unstable to start and they got off to a hot start,” Mitchell said. “It just took us coming in (to halftime) and coming together and telling each other that we just needed to stick to it, play hard, move back up on the basketball and play tighter defense, as we do in practice. So I felt like we were able to play a little bit more aggressive and play our game, and the game flowed our way.”

2. SDSU wins battle under the basket

In his return from injury, junior forward Nathan Mensah played 19 minutes, putting up four points, seven rebounds, one assist, one block and a steal.

Mensah was instrumental in the Aztecs winning the rebounding battle 34-28 (12-7 on the offensive end).

Dutcher said crashing the boards was of the utmost importance entering the game.

“We thought the key to the game was gonna be rebounding, and we did a really good job on the glass,” Dutcher said.

Another forward who earned playing time was former Maryland transfer senior forward Joshua Tomaić. Tomaić tied for third on the team in rebounds (3), but the Aztecs also had an edge scoring points in the paint (24-12) thanks to his nine points.

As a team, the Aztecs were efficient in the post, scoring 10 layups on 15 attempts compared to the Bruins’ three on eight tries.

The Bruins were without two starters due to injury. Junior forward Jalen Hill did not play due to a reported knee issue, while Kentucky transfer sophomore guard Johnny Juzang was out due to a stress reaction in his foot.

Dutcher said the absence of Hill was an advantage for the Aztecs in the paint.

“Hill is a tremendous rebounder,” Dutcher said. “He was number one on our board — his rebounding ability. So not having him helped us a lot… but like I said, we can’t control who doesn’t play for them. All we can control is our energy and our effort and I thought we came out and played with both great energy and effort the entire game.”

Tomaić was not the only Aztec to make his debut on Wednesday night.

Gomez proved to be the most active bench player, scoring 10 points (including two 3-pointers), one rebound, two assists and a steal in 20 minutes of game time.

With the exception of Butler (two first-half minutes), no bench player was on the floor for less than 13 minutes against UCLA.

Dutcher said the team’s depth should continue to pay dividends as the season goes on.

“I just think we have great depth,” Dutcher said. “We used a lot of guys, 10 guys, and we don’t drop off much. This might be as deep a team as we’ve ever had.”

The Aztecs bench not only played significant minutes but put up a significant statistic: points scored. SDSU’s nonstarters outscored UCLA’s, 21-6.

Schakel said the bench was able to provide a rotational spark.

“A lot of guys played really well tonight, came out with great energy, rebounded, got a lot of tip-ins and just (were) aggressive,” Schakel said. “We’re really grateful for our bench.”

SDSU will take on UC Irvine on Nov. 27 at 4:00 p.m. in the second matchup of the Aztecs’ multi-team event schedule.