SDSU football announces it will play Colorado on Nov. 28

The Buffaloes replace Fresno State, who had to cancel its matchup versus the Aztecs due to COVID-19 contact tracing. 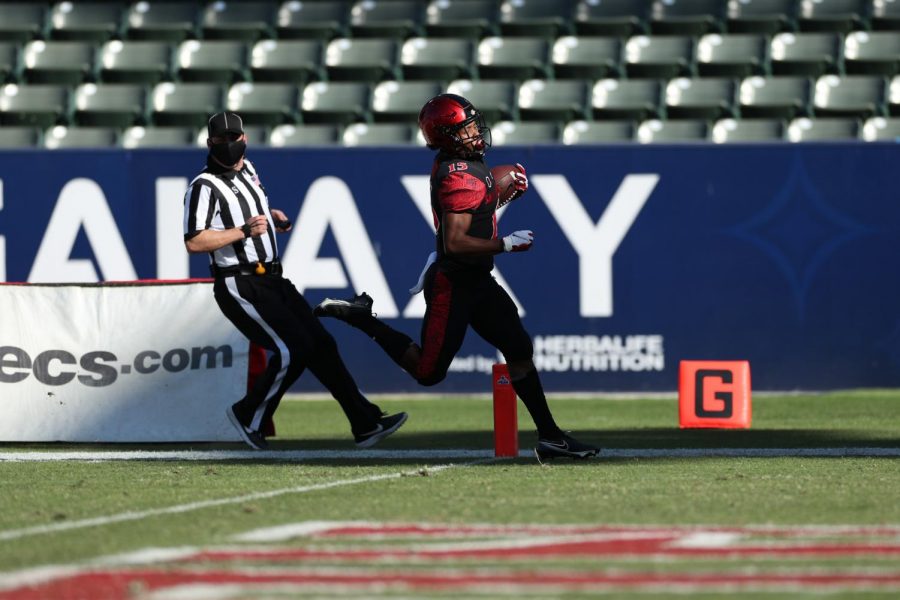 Then-junior running back Jordan Byrd rushes for a touchdown during the Aztecs’ 34-10 win over the Rainbow Warriors at Dignity Health Sports Park in Carson, Calif. on Nov. 14.

San Diego State football will face Colorado on Nov. 28 in Boulder, Colorado, replacing the Aztecs’ initially-scheduled game against Fresno State. The Mountain West Conference declared Aztecs-Bulldogs a no-contest due to contact tracing within the Fresno State football program on Nov. 22.

Colorado was initially scheduled to play USC this weekend, but positive COVID-19 cases within the Trojans’ program forced the game to be canceled.

The Buffaloes (2-0) edged UCLA and Stanford in the team’s first two games before having games versus Arizona State (Nov. 21) and USC (Nov. 28) canceled.

One of the biggest question marks entering the week was SDSU’s quarterback situation.

In the Aztecs’ last game against Nevada on Nov. 21, graduate transfer quarterback Lucas Johnson earned the start over sophomore Carson Baker. Johnson passed 14-for-24 with 184 yards, a touchdown and a 35-yard rushing touchdown.

A lingering hamstring injury hindered Johnson from appearing in two second-half drives, but he still finished the Aztecs’ last offensive possession of the game.

“I think as the week progresses, they’ll both (Johnson and Baker) be taking opportunities, but right now he’s our starter,” Hoke said.