Football takes on first non-conference opponent of season in Colorado 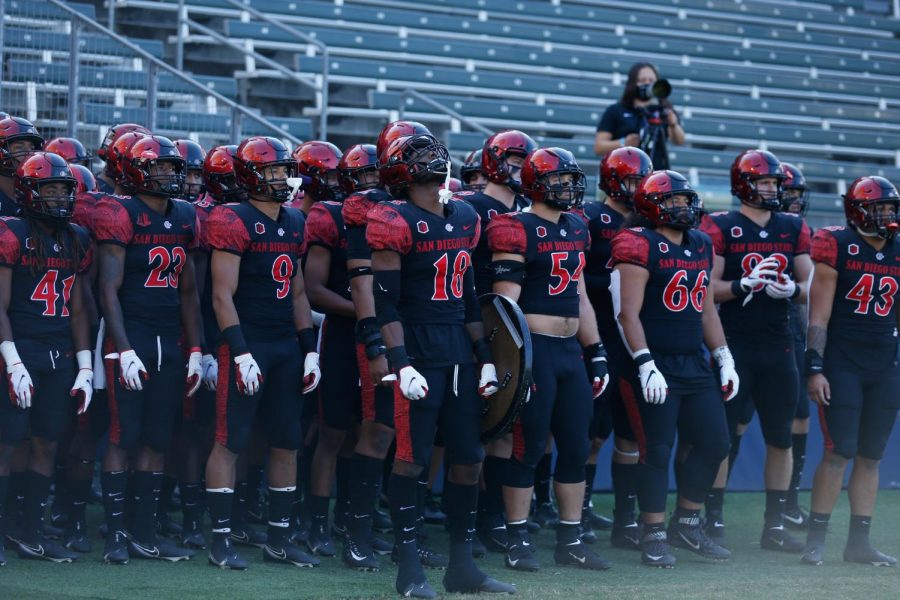 The SDSU football team looks to take the field before the Aztecs’ 34-10 win over Hawaii on Nov. 14 at Dignity Health Sports Park in Carson, Calif.

After its game against Fresno State got canceled, San Diego State football searched for an opponent throughout the week to fill the schedule spot. It was announced on Thursday SDSU will travel to Boulder, Colo. to take on the Colorado Buffaloes on Saturday, Nov. 28.

The Buffaloes (2-0) are the first team the Aztecs (3-2) will face outside of the Mountain West Conference. Reigning from the Pac-12, the last time Colorado faced SDSU football was on Sept. 7, 2002. The Buffaloes were the 17th-ranked team in the country at the time and SDSU began their season with five-straight losses in the midst of its early 2000s rebuild.

The 2020 Aztecs are no longer the rebuilding team they were in 2002, but Colorado still poses as a formidable opponent. Aztecs head coach Brady Hoke was eager to jump at the opportunity to play a non-conference foe. When he was asked about the potential of facing another Pac-12 opponent — Washington — Hoke said he’d do it in a heartbeat.

“We don’t care who we play, but we want to play football.” Hoke said.

Under their third coach in three years in Karl Dorrell, the Buffaloes kicked off their season with two one-possession wins against other conference opponents, beating UCLA 48-42 and Stanford 35-32. With their scheduled game against Arizona State getting canceled, the Scarlet and Black will be Colorado’s first non-conference opponent of the season.

Colorado possesses a tough rushing offense that has scored 41.5 points per game through two games. The team’s play calling shows that running the ball is its goal with a 65-to-35% run to pass ratio.

The Buffaloes have run four offensive sets this season and showed to change their sets from week-to-week. Against UCLA, Colorado mostly ran a two-tight end set — one of them as a wing with two wide receivers and a tailback.

The team would also option to run a three receiver set with a tight end━ with two of the three receivers on the strong side. The Buffaloes would sometimes run a four wideout set as well.

The Buffaloes’ run game has produced 441 yards on 104 attempts, averaging 4.2 yards per carry. The bellcow for Colorado is sophomore running back Jarek Broussard, who is third in the Pac-12 in rushing yards. He leads the team with 58 rushes for 308 yards and three touchdowns, and has run 56% of his teams’ carries in Colorado’s first two games.

The next highest rusher, senior quarterback San Noyer, has only 20% of the team’s carries with 21 rushes for 100 yards and 3 touchdowns. His rushes come often when Colorado is running their run-pass option offense.

Another notable rusher for the Buffaloes is sophomore running back Jaren Mangham who serves as a short yardage back with 17 carries for 24 yards and two touchdowns.

The Buffaloes aren’t particularly a pass-heavy team, but they are efficient when throwing the ball. Noyer leads the team with 35 completions for 510 yards, three touchdowns and one interception. Through two games this season, Noyer averages a 63.5% completion percentage and 256 yards per game.

His top target is sophomore wide receiver Dimirti Stanley, who has 12 catches for 192 yards and one of Noyers’ three touchdowns. Last week versus Stanford, Stanley had six catches for 126 yards and his lone touchdown on the season with a long of 55 yards — Colorado’s longest completion of the season.

Broussard and the rest of the backfield are used lightly in the passing game, as running backs have combined for four catches for 32 yards.

Colorado’s defense appears to be the soft spot of its team, giving up point totals of 42 and 32 in its two games this season. The Buffaloes mainly run a 4-3-4 defense, but they also run a 4-4-3 and will run man coverage out of both with cover-1 and cover-2 looks. When they blitz, they will fill the box with six defenders with one of them in press-coverage on the tight end.

Through the air, the Buffaloes have given up 51 catches for 630 yards. Man defense for Colorado has produced just one interception while giving up 12.3 yards per catch.  Opposing quarterbacks have only been sacked twice all season and both have put up over 300 yards on the Buffaloes.

Senior linebacker Nate Landman leads the Buffaloes in tackles with 20, but it’s been junior linebacker Carson Wells who has been most destructive with nine tackles — one going for a sack, and the team’s lone interception. Colorado has forced four fumbles on the season and has recovered two of them.

The Buffaloes have relied on scoring a lot of points every week to win their games. In both of those games, they took early leads and never looked back despite opposing teams closing the gap late in games. In the first half of games this season, Colorado outscored their opponents 49-23. In the second half, however, teams have outscored the Buffaloes 51-34. In back-to-back weeks, opposing teams have outperformed Colorado in the second half. UCLA was down 35-7 with just over five minutes left in the second quarter and almost game back to win.

With how successful Colorado has been in the first half of games this season, it’s worth worrying if the Aztecs are capable of digging themselves out of a hole in the second half if they were to find themselves in that situation. The Scarlet and Black have scored just 13 points in the second half in the last three games combined.

“The second half seems to be a little bit of an issue with us right now from an offensive standpoint.” Hoke said. “He (junior graduate quarterback Lucas Johnson) slowed down a bit in the second half, and we’ve got to overcome that offensively.”

Similar to last week versus Nevada, the Aztecs’ defense will have to be up to the task of stopping a high-motor offense. This time, however, they’ll have to slow down Broussard behind a big Pac-12 offensive line. On offense, if the Aztecs can utilize their quarterback in the run game and beat the man defense like teams previous have done, they should have no problem moving the ball.

With this being a non-conference game, both teams have nothing to lose. But with the series between these teams being in favor of the Buffaloes, expect the Aztecs to be hungry to even the series.