Column: Three reasons why Toronto is the ideal fit for Malachi Flynn 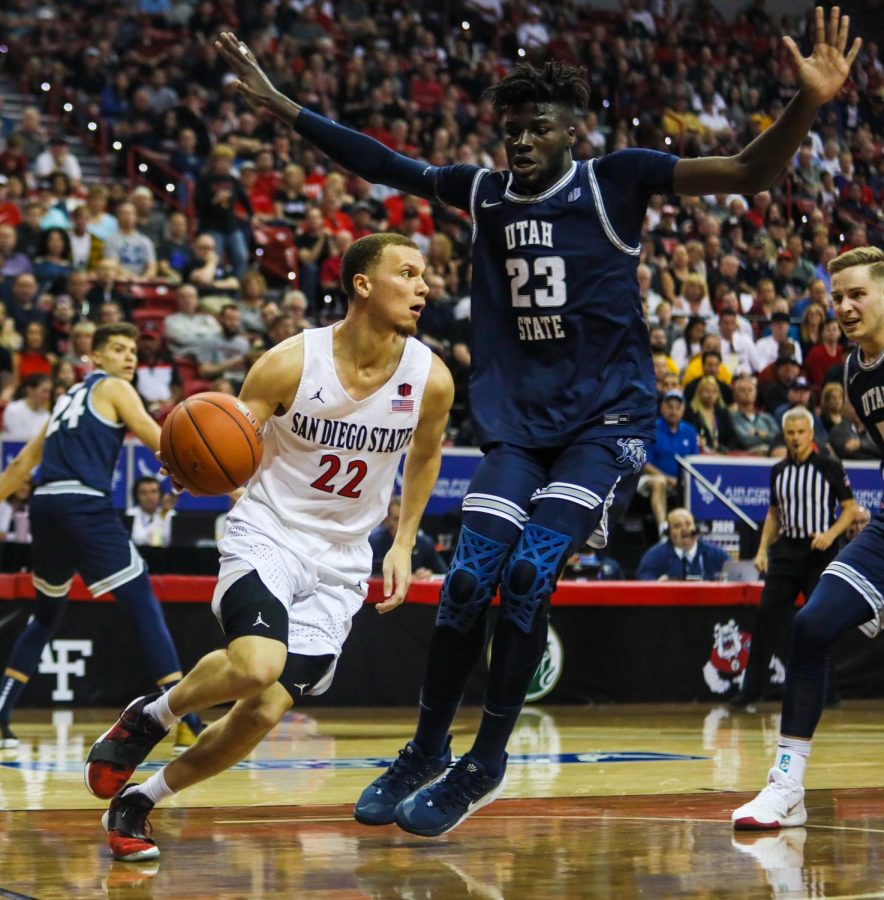 It was a night where dreams came true and for the young, talented collegiate and young professional stars who were able to have their name called, signaling the next phase of their basketball journey. With no fans in attendance, the 2020 NBA Draft didn’t give us the same flashy presentation we have become accustomed to.

However, it did deliver the same overwhelming emotion as the budding basketball stars realized their dedication to the game had finally paid off. The same is to be said for San Diego State standout junior guard, Malachi Flynn.

After drawing rave reviews over his workout sessions in Las Vegas, Flynn quickly became a late first-round draft selection, overtaking the early second-round projection he had for most of the offseason.

Right on cue came the 29th overall pick and the Toronto Raptors were on the clock. Minutes passed, the countdown hit double zero, and with that, NBA commissioner Adam Silver announced Flynn as the newest addition of the Raptors.

Flynn became just the third Aztec in school history to be taken in the first round of the NBA Draft, joining forwards Kawhi Leonard (2011) and Michael Cage (1984). Having achieved Mountain West Conference Player of the Year as well as a spot on the John R. Wooden Award All-American Team, Flynn proved he can contribute at an elite level.

In just a brief two-season tenure as head coach of the Toronto Raptors, Nick Nurse has shown why he belongs in the upper echelon of NBA head coaches. After delivering a longly-awaited NBA Championship to Toronto during his inaugural season in 2019,  Nurse was able to showcase the value he brings as a head coach.  His encore season included him achieving NBA Coach of the Year honors in addition to the Raptors attaining the No. 2 seed in the Eastern Conference playoffs.

With his previous experience as both a head coach in the G-League and coaching teams overseas, Nurse has shown a propensity of developing players regardless of their skill level. This includes generational talents such as former SDSU stalwart Kawhi Leonard, all the way down to undrafted free agents such as Raptors guard Fred VanVleet.

Nurse is able to accomplish this by placing players in the best position to succeed. Whether it is tirelessly game-planning for teams or deciphering roles for every player on the roster, Nurse understands how to get the most out of his personnel, regardless of the particular skill set that they bring to the table.

This includes Raptors forward Pascal Siakam, who was selected in a similar draft spot to Flynn at 27th overall in the 2016 NBA Draft. He has since developed into an all-star caliber talent. This ascension to stardom for Siakam largely began when Nurse took over the reins as head coach during his third season. His numbers across the board skyrocketed and it became evidently clear that Siakam had taken his game to the next level.

Siakam’s improved play would not go unnoticed, as he earned the NBA’s Most Improved Player Award for his efforts during the 2018-19 season and would become a pivotal player during the Raptors’ championship run.

With Nurse’s expanded rotation, Flynn will have the chance to establish a role from the jump. This will allow for Flynn to gain a feel for the NBA early on and begin building a rapport and chemistry with his new team. Gaining this experience will be critical in laying the groundwork for a long and prosperous career for Flynn.

Unlike many other NBA teams, Toronto isn’t an organization that revolves around one or two superstar talents commanding most of the attention; rather, more so the way the Raptors win games is predicated on team basketball and many players contributing to the final product. This includes active ball movement on offense and full engagement on the defensive end. This style of basketball lends itself to every player on the court having a palpable impact on the outcome of games.

Without a superstar demanding a high workload, opportunities will be available for Flynn on the offensive end. Fresh off his junior season in which he produced 17.6 points and 5.1 assists per game, Flynn proved he’s more than capable enough to be the focal point of the Aztec’s offense. With Fred VanVleet now locked in for the foreseeable future on a four-year deal, Flynn will have to make the transition towards a reserve role.  Coming off the bench may require an adjustment period, but inheriting a stable role along with consistent minutes will advance Flynn’s game on the offensive end.

Moreover, with the strong depth, the Raptors have at their disposal, Flynn will continually be surrounded by plenty of talent. With this abundance, Flynn will be able to play free and focus on sustaining the high level of efficiency he had while playing for the Aztecs.

Having an elite defense has become a staple for the Toronto Raptors.  Last season, the Raptors were 2nd in defensive rating and allowed a league-low 106.3 points per game to opponents.  Despite Flynn’s excellence on offense, defense has proven to be his bread and butter.  His efforts on defense last season culminated in him earning an MWC Defensive Player of the Year Award, making the Raptors the perfect culture fit for Flynn.  Flynn’s dedication to defense and the polished skill set he provides on offense will boost the Raptors’ fortunes for next season.

3. Playing for a competitive organization

In recent seasons, the Raptors have not only earned multiple playoff berths but have shown a knack for being in the mix for a potential NBA Finals appearance.

Two seasons ago, the Raptors made team history when Kawhi Leonard led them to an NBA Championship and since then, the franchise has shown a dedication to winning.  Despite losing Kawhi Leonard the following offseason, the Raptors have since done their due diligence in signing Siakam and VanVleet to lucrative deals.

Flynn isn’t going to be entering an organization that is in any sort of competitive limbo, but more so a team that is determined to lift banners.

Raptors president Masai Ujiri continues to be a highly sought-after executive in the league — and for good reason. He’s assembled a Raptors team that has a unique blend of veteran talent along with young players Flynn can grow with. Raptors guard Kyle Lowry may warrant hall of fame consideration once he decides to call it a career. Having Lowry as not just a teammate, but somebody Flynn can learn off of is invaluable to his development.

Furthermore, being guaranteed the opportunity to play alongside Norman Powell, Siakam, and VanVleet for at least the next couple of seasons will ensure team continuity and a ceaseless killer instinct for winning.

All this combines to make a playoff berth more of a foregone conclusion rather than a question mark. Although Flynn wasn’t given a chance to play in the NCAA  tournament in March, having the opportunity to compete in the NBA Playoffs will be momentous in his quest to earn a second NBA contract.