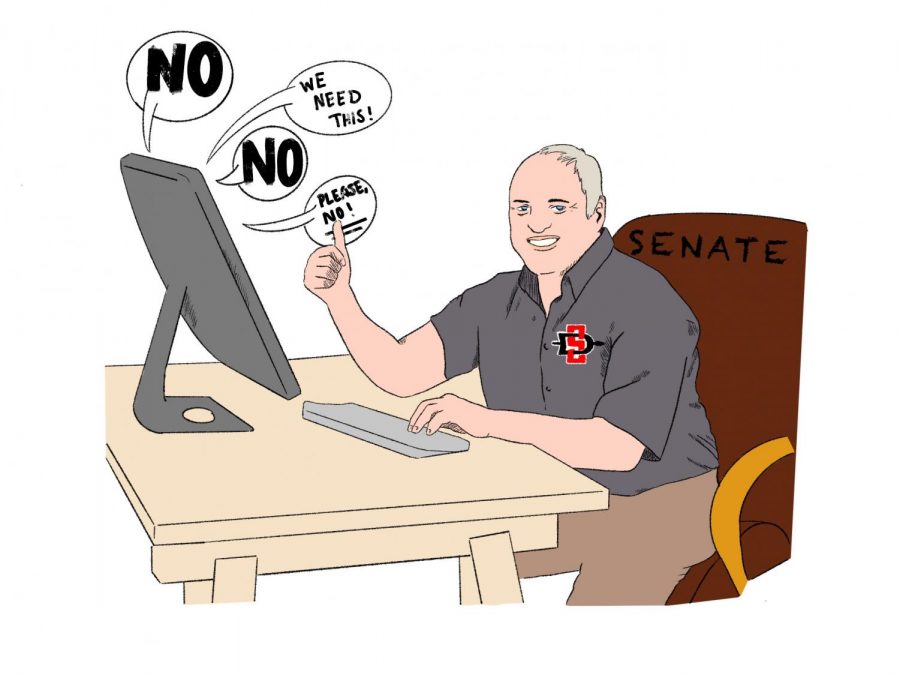 The University Senate did not listen to the cries of students who strongly opposed eliminating the traditional Spring Break.

Maybe we’re just naive. Or, maybe we just wish San Diego State would do the right thing by students for once. But the decision made at the University Senate meeting yesterday regarding Spring Break is yet another example of the university blatantly ignoring its students.

Yesterday, our fellow students were silenced in an open forum, and countless other community members weren’t given a seat at the table. This is unacceptable. What’s more, it’s reprehensible.

Former Senate Chair Mark Wheeler said at the beginning of the meeting that shared governance at San Diego State was “alive and well.” He spoke too soon.

For a deliberative body that espouses the virtues of shared governance and reaffirms its commitment to this practice every time it meets, the University Senate provided a textbook example of what shared governance is not. The fact that the final vote to eliminate Spring Break occurred essentially behind closed doors on a separate, regulated Zoom call is evidence of that.

Tuesday’s Senate meeting was a colossal disappointment. The process failed students and left them feeling betrayed and dismissed. It also failed faculty, and that’s saying something given that they out-represent students in the Senate 100 to 5.

Even more disappointing was the decision of 44 senators to disregard the very legitimate and serious concerns prominently brought forward by their fellow faculty, student leaders and hundreds of students themselves.

As approved, the plan to replace the traditional nine-day Spring Break with four separate non-instructional days (five if you include Cesar Chavez Day, which is already a contractually mandated day off) is inadequate and quite honestly insulting. It also offers no respite to students who already don’t have class on the scheduled “recovery days.” Not to mention, there are no guarantees work will not be assigned immediately following the days off, therefore defeating the purpose of them altogether.

The pandemic has taken its toll on people’s mental health, and students and faculty alike have been forced to adapt to new and often uncomfortable ways of learning and teaching. Anyone who thinks virtual instruction is equivalent to learning in a classroom is lying to themselves. This semester has been far from easy.

A traditional Spring Break is like an oasis in the middle of a 16-week desert for students and faculty. It can be life-saving and regenerative.

Students need a break. Many work on top of going to school full-time. Others take care of families and have responsibilities beyond those at SDSU. Two three-day weekends and a couple of random days off in the middle of the week do nothing to relieve the stresses and anxieties brought on by this reality.

Faculty also deserve time off. Spring Break offers them the opportunity to focus on research that they push to the side. You’d think as an academic institution dedicated to innovation, SDSU would want to facilitate this.

We understand that circumstances surrounding the pandemic required a change to be made. This editorial board has not held back when demanding students take personal responsibility to safeguard public health.

We’ve also withheld judgment on the university’s response to the growing number of COVID-19 cases among students because we believe public health experts should have the last word. However, it’s become abundantly clear that SDSU’s response was far from adequate.

UC San Diego is a shining example of what an effective, competent and empathetic response to COVID-19 looks like on a university campus.

It’s regrettable that veiled behind a concerted and well-placed effort to contain the virus’s spread are SDSU’s attempts to save face and mend a damaged reputation.

Students and faculty should not have to pay for administrators’ mistakes in August and September. It’s not too late for Senators to reconsider and find a compromise that aims to strengthen public health while restoring a necessary break for students and faculty.

We’ll be waiting, but we aren’t holding our breath.

Correction: An earlier version of this editorial misattributed a paraphrased quote to Senate Chair Wil Weston. The statement was made by former Senate Chair Mark Wheeler, and the article now reflects this. The Daily Aztec regrets this error.