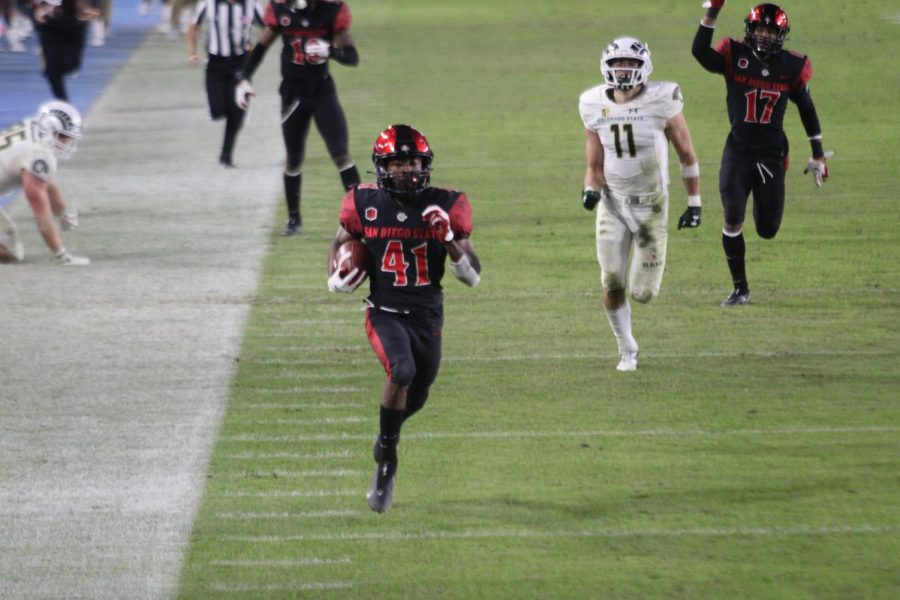 Junior wide receiver BJ Busbee returns a punt for a touchdown during the Aztecs' 29-17 win against Colorado State on Dec. 5 at Dignity Health Sports Park.

SDSU junior quarterback Jordon Brookshire earned his first-career collegiate start, throwing for 14-for-24 for 130 yards, one touchdown and taking 23 carries for 38 yards.

The Aztecs have dealt with special teams issues — primarily muffed punts — throughout much of the 2020-21 season.

In the first half, special teams made up for many of the points conceded by the Aztecs’ defense.

Following a CSU field goal, junior running back Jordan Byrd took off for a 93-yard kickoff return with 11:54 left in the second quarter.

Junior wide receiver BJ Busbee took a punt 90 yards to the house after the next CSU drive (which resulted in a three-and-out).

Hoke credited special teams coordinator Doug Deakin after the game and said he was happy with the performance on special teams.

“(Deakin) is probably one of the better guys in this country as a special teams coordinator, but that group did a nice job,” Hoke said. “When you’ve got some guys that can do a great job getting north and south, that’s what you want to get and we blocked it all up pretty well.”

Byrd and Busbee weren’t the only Aztecs to get involved on special teams, however.

Sophomore kicker Matt Araiza missed a PAT attempt after Busbee’s score, but he made up for it by knocking through three field goals on three attempts. His makes came from distances of 40, 21 and 38 yards, respectively.

“He bounced back from last week and it was great to see him come out there and have confidence and it really looked like he had more confidence,” Hoke said. “Good snaps, good holds and a good job kicking the football.”

17 points allowed in the first half.

Zero in the second.

105 rushing yards in the first half.

…You get the point.

“If they can’t score, they can’t win,” was Hoke’s message to the defense at halftime. “(105 rushing yards at halftime is) not good enough for San Diego State.”

The Aztecs were lights out in the second half — not only by shutting the Rams out, but also by creating turnovers.

Senior cornerback Tayler Hawkins also got a piece of the pie later in the quarter, grabbing an interception that gave the Aztecs possession. That marked the first interception of his career.

Senior defensive back Dwayne Johnson Jr. said the defense knew it needed to put together a strong second-half performance.

“We needed to get back to playing Aztec football which was physical, be tough and stop the run,” Johnson Jr. said. “So coming out at half we knew we had one job and that was to keep them out of the end zone.”

Prior to Saturday’s game, 19 SDSU football student-athletes were honored as part of the team’s Senior Night festivities.

Each senior ran onto the field before the game as their name was called by the PA announcer. Even though it was an uncanny Senior Night, Hoke said the players were still able to celebrate with their families virtually Friday night.

“We’re honoring their families and so they mean an awful lot to us as a staff — me personally,” Hoke said. “I always think that your seniors are the guys that you coach for and you play for.”

The COVID-19 pandemic has affected a lot of people, and the SDSU football team is no exception. They’ve spent the whole season abiding by strict protocols to have the opportunity to play.

Spalding said he’s pleased with the way his fellow seniors were able to show the underclassmen the ranks.

“I was proud of our team for what we did,” Spalding said. “What it means to me is not only ending it the right way but showing the underclassmen the way that it needs to be done and creating a legacy for them and showing them Aztec football because they’re the ones that take it.”

One senior who was limited in game action was senior running back Greg Bell. He missed last week’s game against Colorado with an injury, and those woes continued Saturday.

After halftime, Bell was announced questionable to return with an ankle issue. Bell took one first-half carry for four yards but did not receive any other touches.

“He’s not as healthy as he’d like to be or we would like him to be,” Hoke said. “That one carry was about it.”

The Aztecs wrap up their regular season on the road against No. 13 BYU on Saturday, Dec. 12. The Cougars (9-1) suffered their first loss of the season Saturday, falling to No. 18 Coastal Carolina 22-17.