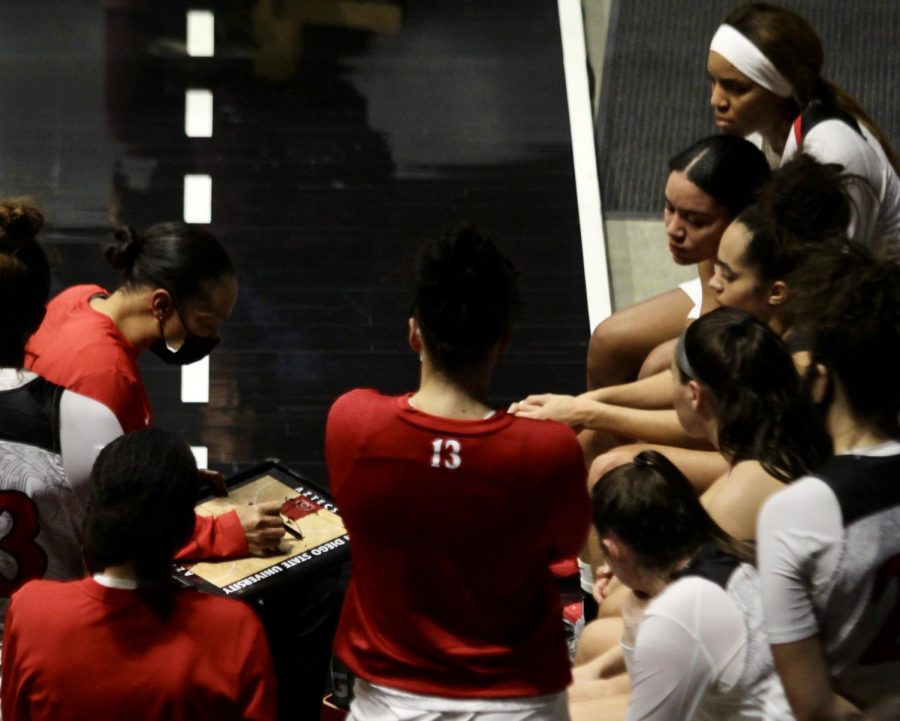 San Diego State women's basketball head coach Stacy Terry-Hutson (left) draws up a play near the end of the Aztecs' 75-71 loss to Cal Baptist on Dec. 2 at Viejas Arena.

In a news release, San Diego State women’s basketball announced its game against St. Katherine on Dec. 13 is canceled due to a positive coronavirus test coming from the Firebirds’ program.

Sunday’s game will not be rescheduled and will not count toward either team’s records.

The Aztecs are coming off a victory over cross-town rival University of San Diego on Saturday, winning 64-56.

SDSU jumped out to a 20-6 lead after the first quarter and held on for the victory at Jenny Craig Pavilion.

Senior guard Téa Adams led the way for SDSU (2-2), scoring 19 points on 9-of-10 shooting to go with two assists and two steals.

In addition to Adams, junior guard Sophia Ramos recorded her second double-double of the season, posting 15 points and 10 rebounds to go with four assists and a perfect 5-for-5 at the charity stripe.

The Scarlet and Black had a third scorer in double figures in junior guard Mercedes Staples, who had 12 points and seven rebounds.

Although the Aztecs do not play on Sunday, SDSU will gear up to take on Colorado State in Fort Collins, Colo. for its first of two games in the Rocky Mountain State on Dec. 8 and 10.

It will be the Scarlet and Black’s first two Mountain West Conference games before coming home to play UC Irvine on Dec. 19 at 4 p.m. and Cal Poly on Dec. 21 at 2 p.m.