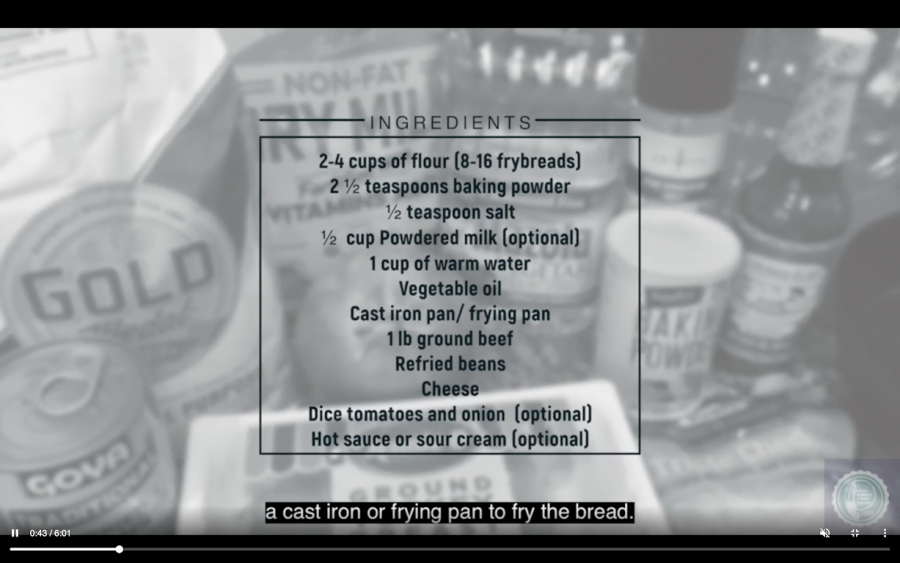 A set of instructions for how to make Native Frybread.

Looking for a tasty traditional meal? Or a savory dessert to warm you up as the days get colder? Well, look no further than to Native frybread.

Following videos with Tijuana Home Build and AB Samahan, this is yet another collaboration with a cultural organization on campus, as A.S. looks to bring fun videos to SDSU students wherever they’re residing. Though Cooking with Chefs was a long-standing tradition on campus before the pandemic, A.S. is using clubs to introduce authentic regional foods for people to cook anywhere from gourmet kitchens to their apartment stove.

NASA Chair Kenedi Kraten participated in the video and spoke about the history of the dish while providing an easy list of ingredients to make it.

Kraten said A.S. reached out to the alliance to make a video for their series and they happily accepted.

“I’m glad I was able to share the frybread recipe, making the video was a really fun experience,” Kraten said.

Frybread is a versatile dish. It can be eaten alone, as a meat-based meal or with sweet toppings to make it a delicious dessert.

The dessert version is Kraten’s favorite and she enjoys putting powdered sugar, honey or chocolate sauce on top.

“I have been making and eating frybread since I was a little kid. Frybread is a staple dish in many indigenous households, which is why I wanted to share the dish,” she said.

According to Kraten, frybread was created by the Apache and Navajo people in 1863 and is now a staple dish in many native households nationwide. Though there are several different names for this dish, each version uses all the same ingredients. It requires only around ten ingredients to make and less than an hour of cook and prep time.

Like many student organizations on campus, NASA had to transition online for the fall semester. Though there have been varying degrees of success for each club, NASA has been able to maintain much of their reach, even with the tumultuous switch to digital interaction.

“NASA has adjusted well to being all virtual,” Kraten said. “Sometimes [it has] been tough trying to navigate the new virtual world, yet we have still managed to remain an active presence on social media, even hosting and co-hosted several zoom events.”

November is Native American Heritage Month and with collaboration from the Native Resource Center, SDSU American Indian Studies Department, and others, NASA is planning on holding numerous events for students to come together, learn and celebrate the indigenous community, while also acknowledging the importance of our studies on Kumeyaay land.

Kraten named some upcoming events that all students are welcome to join in.