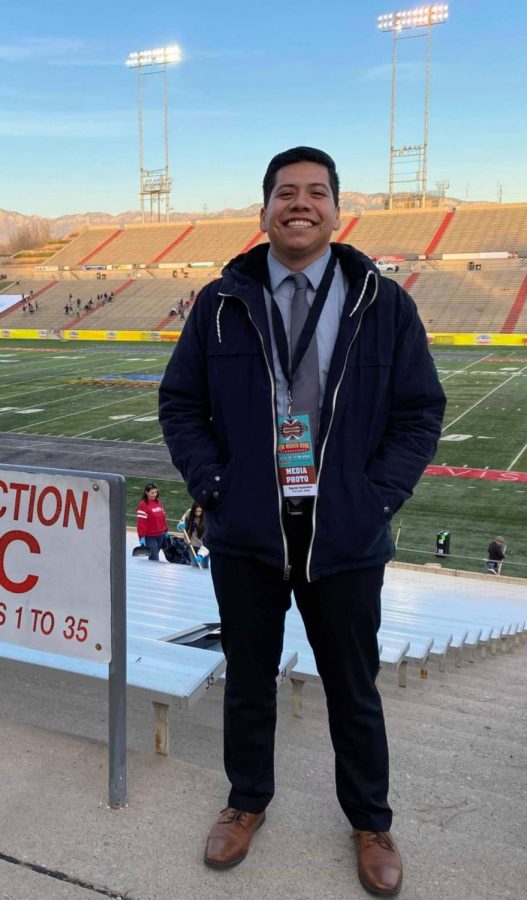 A photo of Daniel Guerrero from the 2019 New Mexico Bowl in Albuquerque.

There’s so much I’m going to remember from my two and a half years at San Diego State, but none of it will be from my classes or from SDSU itself.

All of it will be from my time at The Daily Aztec.

I never thought that The DA would be the best thing to happen to me in my professional, academic and personal life, but it was.

The DA provides an opportunity for students who want to pursue a career in media, but you have to work for it.

I was able to build myself up to earn internships at great places where I met even greater people. The DA helped me join the National Association of Hispanic Journalists where I have been able to meet journalists from around the nation.

When you read my biography on my DA author profile, it says my career goal is to be an MLB baseball writer – which is something that still holds true among other goals and aspirations I have for myself.

The DA gave a sample of that as I covered SDSU baseball and became the resident “baseball insider” in our newsroom.

Most of all that I’ll forever cherish about my time at the Daily Aztec will be the people I met inside the newsroom and the memories that came with the new connections.

I made friends that I’ll have for life and that I know I’ll cross paths with professionally down the line.

I never really lived the “college life” at a school that’s seemingly only known for partying.

While some students were living it up on the weekends, I was living it up inside the Ron Fowler Press Box at Tony Gwynn Stadium and at the SDSU Sports Deck.

When students traveled for winter break, I was driving at 5 a.m. to Albuquerque with my two best friends on our way to cover SDSU football’s New Mexico Bowl game in what is undoubtedly the best road trip I’ve gone on.

A road trip with the foos, what more can anyone ask for?

Yet, even after late nights covering SDSU sports when I saw my Instagram feed filled with people going out and doing what young adults are supposed to do, I knew I loved what I was doing.

When I made the late-night walks down Montezuma Road on my way back from covering SDSU games and saw students walking to and from parties, I never thought I wanted to swap places.

Every story I wrote, interview I did or event I attended as a staff writer and as Mundo Azteca editor allowed me to share the stories of students, clubs and the faculty of the SDSU community.

The late nights spent in our rundown and outdated newsroom felt worthwhile knowing we were making an impact.

Call it nerdy or boring or whatever you want, but in my eyes, it was the complete opposite of that.

There isn’t a thing I’d change about my experience at SDSU and it’s all thanks to The Daily Aztec.

Yet, none of this would have been possible without the people who got me here. Without the foundation they laid for me, I couldn’t be who I am. I wouldn’t have had the opportunities I got without their sacrifices.

My mom, dad, my brothers, grandparents and other family members who supported and believed in me along the way, I love you all more than you know.

Thank you for always supporting me.

This one’s for you.